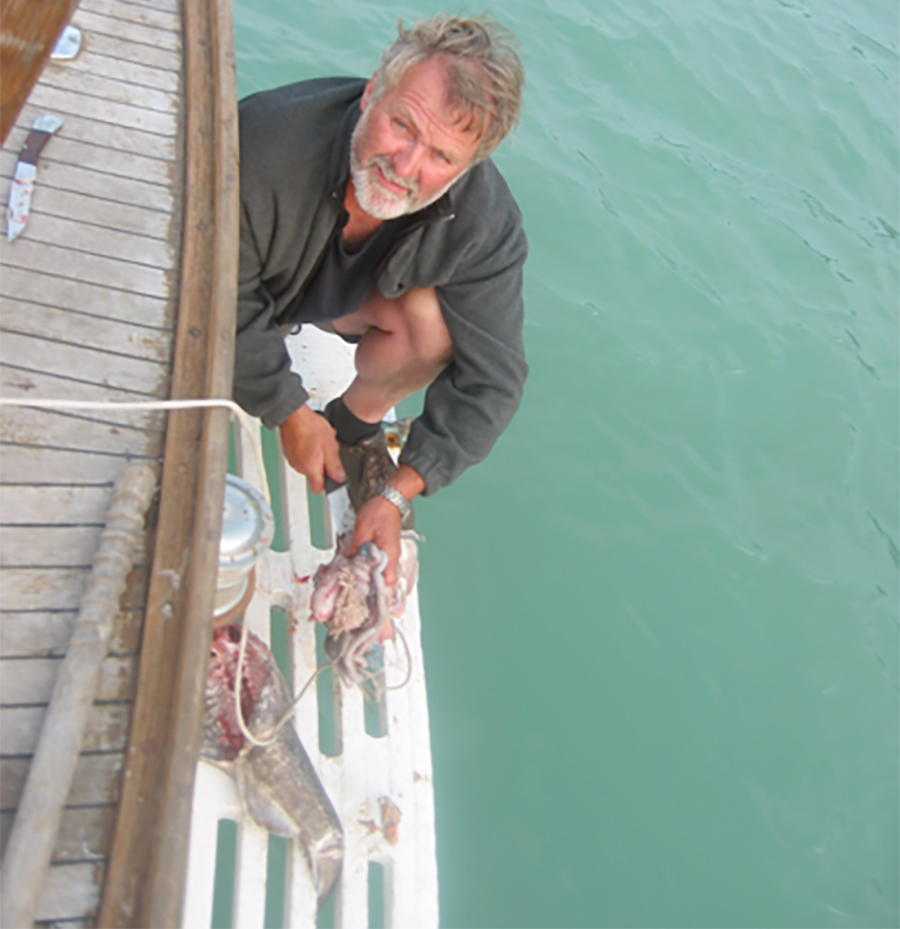 We spend an uneasy night tucked slightly behind Aurther Island in Mathieson Channel. The hook is dropped, our only barricade from a Sou’ easter is a small log boom. There has been no defining wind direction for the past few weeks; just a continual blow with ratings from storm to small vessel warnings on the weather channel. Other than my fears of a blow up, the night has been uneventful. The anchor is pulled and we look forward to an easy cruise into Shearwater, which is beside Bella Bella, on the inside passage of B.C., Canada. A small chop on the sea is riffles from the local breeze and nothing more. If there were swells it would indicate that there are big seas brewing further out.

Audrey is coming into view of Lady Douglas Island when we notice flashing lights in the sky in front of us. Very unusual…the Captain, who once flew his own plane, is excited that this Beaver is coming in so close to say good morning. I am the cautious one, this Beaver is just slightly above our masthead light and he is flashing his landing lights and anything else that he can light up to catch our attention.

A slight dip of the wings means hello to me. This pilot is going out of his way to get his message across. His engines roar over the saloon, he continues to wag his wings and flash his landing gear; he quickly gains altitude and disappears towards the north. I say to the Captain that I believe we have just received a warning. The Captain reminds me that we are very protected in Mathieson Channel our only exposure to the open ocean will be when we round Lady Douglas Island. There is only a very few miles until we can tuck into Reid Channel, it will be a piece of cake. I feel better, how bad can it be?

It’s a relatively narrow channel between Lady Douglas and Lake Islands; lots of small hazardous rocks and islands narrow the passage down even further. There is no quick turn around space. Audrey is 54’ in length with a 13’ beam (width) at her widest point, she is cigar shaped. With her displacement hull she cuts through the waves rather than rides them, having a narrow beam means that she doesn’t respond well to being hit broadside by rough seas, in other words if we have to take it on the beam she could broach or fall on her side into the trough of the sea. I really don’t like when this happens, it truly makes your heart stop.

We’ve come between Lady Douglas and Lake Islands; Cecilia Island is not far off our portside. Squeezing between Lake Island and a large rock to our starboard side we now know why the plane was trying to warn us. This is a very shallow area which causes the waves to basically bounce back off of the ocean floor creating standing waves, we are in them, they are 14’ high…WE CAN NOT TURN AROUND!

These monsters are threatening to roll us up on the rocks. The Captains only alternative is to take us out to sea. We have to take these waves head on so as to avoid any sideways contact that will roll us side over side until we smash on the reef. We head out into the open ocean, the waves are building, they are huge, chairs that we use at the chart table are rolling on the floor and smashing against the walls. Books are falling from the shelves, cupboard doors are slamming back and forth and cans and pots are colliding creating a terrible noise, my plants and window herb garden has fallen and smashed on the floor.

I am hanging onto a small piece of wood trim that runs along the dash with my fingertips and trying to wedge myself against the chart table so that I don’t end up on the floor rolling around with the chairs.

My head is hanging down below the dash and I am praying quietly, this is terror beyond anything that I ever want to do again. The huge waves are smashing against the hull and Audrey shudders with the impact. Her ribs are being battered as she fights the seas and we can hear her moan with the effort of staying afloat. I raise my head just as I hear the Captain yell “Holy…,” I have known this man for 32 years and this is the first time that I’ve ever seen him afraid; I know for sure we won’t make it.

A giant wave smashes directly against the almost sixty-year-old front window; it cannot withstand that kind of impact again. Once the window smashes out it will only take a few minutes for us to start to take on water. The cold black sea will rush in and swamp us.

The Captain looks at me for a moment, “I have to try something that I’ve never done before,” he yells, ‘hang on!” A huge wave slams into the bow; the water is thrown way up and over the flying bridge. Fifty four feet of boat is racing skyward, she’s dancing on her stern and then we plummet down into the trough, upward again, with water crashing out the view from the window, speeding downward toward the sea bed, we are a submarine.

I hear the Captain counting “one, two, three…I understand. Generally the seventh wave is the biggest, he is looking for the biggest wave! When we top the wave he will try to turn us on the crest before we slide into the trough again. If he doesn’t make it we will be hit broadside and we will be lost forever. The Audrey Eleanor and crew will be rolled over and over ground and pummelled into the bottom of this merciless ocean.

We crest a huge wave, and manage a quick look between us; you hope you’ve been able to convey the things that you should have said to each other plus good-bye in that split second. There may never be a chance to say the unsaid, this could be our final moments on earth, the time has come and gone to say what needs saying, the Captain yells “hang on!”

He throws one engine in forward and one in reverse, pours the diesel to the engines and we begin to pivot on the top of a giant wave. In slow motion she begins her turn, the bow is heading downward and we charge back down into the trough, sound has been sucked out of the air, it feels like we are in a vacuum.

We are heading back toward land on a following sea. Remember what I said about these waters being really shallow, Audrey is now fighting to climb a mountain of water in front of her and the surge bearing down from behind is threatening to break onto our stern deck, and crush us. We are worried that we will bottom out in the trough.

I stand on the back deck watching as this Grande lady fights to climb this wall of ocean. The mountain of water is 20’ high. Her engines are pounding like double heartbeats; the props churn in the wave. Twin props scream as the wall of water lifts and exposes them. She fights, she screams and struggles to lift us up to the crest of the next wave, she does it, she does it! She carries us forward, we truly have made it. The Captain surfs us toward land, safety and Reid Channel.

It is only 9 a.m., what a morning! This adventure happened before our morning coffee. Reid Channel is narrow, protected and the waters are calm. It is impossible to believe that minutes ago we were fighting for our lives, now we are slowly cruising into this beautiful marine park. There are books mixed in with the dirt and broken plants that validate we actually just smashed our way through mountains of water.

We had thought to check out Oliver Cove on our way by, the diving is supposed to be great, but it is still early in the day. The thought of a little socializing and fresh food in Shearwater is drawing us out into the open sea again. We will have to stick our noses out past Ivory Island and into Sea Forth Channel, but what the heck; a person can only have one really horrific experience on the ocean in one-day right?? Besides as the Captain likes to say “God Hates a Coward”, this storey will be continued in the next Adventure of The Audrey Eleanor, ‘Ivory Island’.