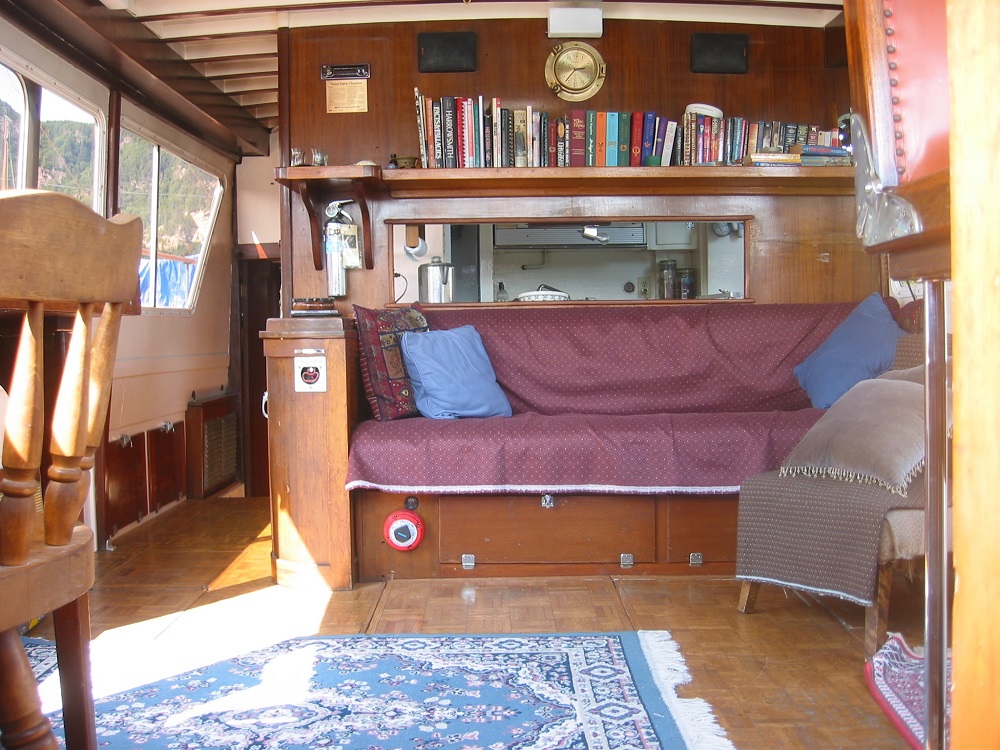 In the previous adventure; the Audrey Eleanor and crew take a beating while trying to creep undetected past the furies and Mother Nature into Milbanke Sound and through Reid Channel.  They manage to escape after 20-foot seas threaten to roll them side over side and dredge them into the ocean floor:

It is surreal cruising down Reid Channel in calm waters after being battered minutes earlier by huge waves.  I have to pinch myself to make sure that I am still alive.  It is one of those moments where you wonder if you haven’t actually crossed over into another world or dimension and someone should show up soon to give you directions on how to proceed.

The directions come… from the helm. The Captain decides that we should cruise into Oliver Cove to check out possible anchorage and make the big decision, do we go or do we stay?  It is nine o’clock in the morning and Shearwater is only a few hours away.  We have been living off of dry goods, mostly what the mice have left of the lentils (the un-damaged bags, I know what you are thinking!!) and whatever the Captain manages to bring up in the crab traps or catch on a hook…you can actually get sick of crab you know.

What are the odds of experiencing another extreme adventure the same morning after our experience at Milbanke Sound?  We have studied the charts. The direction of the waves we have just come through could make it rough going at the tip of Ivory Island, it should only be for a short distance, the tide has turned and could help ease the ride.  God hates a coward; we’re going for it.

Between Cecilia Island, Ivory Island and Don Peninsula there is a minefield of rocks.  Coming out of Reid Channel you have a very narrow passage with Ivory Island to your starboard side, the lighthouse on Ivory Island then works as your navigational aid that directs you safely up Sea Forth Channel.  Most of the rocks in this area are “just” submerged, waves smashing over and on them, verify what the charts say, this is an extremely dangerous area…stay on the road.

The Captain edges Audrey out into the channel, so far so good.  Swells begin to rise, the wind picks up as we head out.  Makings of waves on top of the swells are making me nervous.  The swell/wave action is increasing, a combination of the seas building and the waves are beginning to break over the bow again.  My hands begin to shake and I’m having difficulty hanging on to my little ledge on the windowsill.  Ivory Island is close, just off to starboard… the waves are beginning to resemble the monsters that we have just escaped.

Why on earth would we do this again on purpose, here we go again.  I have lost the feeling in both of my arms and they are jumping around like some invisible puppet master has control of them and just wants me to look foolish. Thank the Goddess, the Captain decides that this is enough for one day, makes the turn and is taking us back toward Reid Channel.

A white curtain drops in front of us.  An inversion of cold air hitting warmer water or vice versa, we are in a fog bank.  The inversion has also instantly steamed up all of our windows, they are running with condensation and it’s impossible to see out. Amazingly, as soon as we are out of the huge waves my arms become my own again, physiological you think; you bet, I am terrified!

I have a squeegee; I am running from window to window clearing off the moisture so that the Captain has some visibility in this rock minefield.  The mouth of Reid Channel is very narrow and hard to distinguish in fair weather; the fog and rain are making it impossible. Cecilia Island looms out of the fog in front of us, we nose toward the shore trying to get our position.  Something doesn’t feel right, I run to the stern of the boat and look outside, we are churning up mud!!

I run yelling toward the saloon, the Captain has already figured that we have a problem and has thrown Audrey into reverse. The wake of the boat lifts us up and back out, he switches to neutral.  The fog has cleared enough; we can see our bow is not in Reid Channel.  Our nose is stuck into a little bight (indent) on Cecilia Island, but where on Cecilia Island!  Are we either too far to the east or to the west of the channel?  The fog swirling around us is thick, too thick for us to see anything in the distance.

A sudden rush of fresh wind tosses us and drives the fog further out, this we don’t want to see.  All around us the waves are smashing on barely submerged rocks, it looks like those pictures you see of the Oregon coast during a storm, I’d always thought that the waves crashing on the rocks with spray flying high into the air looked wild and beautiful.  Up close it’s wild and bloody dangerous.  There is no way out I tell you!

The Captain is struggling to maintain our position; waves are making it difficult to hold a steady course.  Our bow is in the bight and our stern is positioned between two huge submerged rocks, they look to be about three feet below the surface with the one on our portside breaking free of the ocean now and again. Our draft is 4’6” those rocks will gouge and crack the hull apart.

A decision is made; we are in reverse and heading to starboard to find the channel.  The Captain has us turned slightly to the right and he is waiting, waiting again for that bigger wave.  The wave comes, lifts us up and carries us over the rock; I can hear ripping and tearing and run back to the stern.  Our tender is strapped to the transom and below it is what’s left of the swim grid.  The rock that was only partly submerged has ripped off two feet of the swim grid and a section of chrome from the side, we are that close. We have only our eyes and the Captain’s instincts to guide us through this mess, there is no channel.

The waves toss saltwater 10 feet into the air; these are the easy ones to see and to avoid.  The deadly ones are the deep dark swirls, are they real or illusion. After trying to look into and through water, your mind starts to play tricks on you, was that another rock or simply a shadow of the depths??  To portside, the mouth of Reid Channel comes into view; we have done it, again.  God protects drunks, fools and little children; we fit all these categories, depending on the hour.

To this day, I don’t know how the Captain brought us through those rocks, if you ever get a chance check out Canadian chart 3710 and you will understand. Losing part of the swim grid and that little piece of chrome are so minimal in comparison to what could have happened.  It is an unbelievable feat and an incredible ability to read water that the Captain once again, in the same day and almost in the same hour saved our lives!

Again, we are safely in Reid Channel and heading for Oliver Cove.  Audrey cruises into the cove and the anchor is dropped.  It is 11 o’clock in the morning; we both fall on the saloon floor exhausted.  The last thing that I remember is looking through the window and watching the trees swinging quickly by, we are truly swinging on the hook.  We sleep on the floor, like the dead we could have been, for hours.  Finally the cold creeps up and in from the hold, sneaking into our bodies.

The Captain lights our Dickinson stove in the galley, the temperature is dropping.  From our snug anchorage we can see out into Reid Channel.  The wind is managing to drop down over the tree tops causing us to swing like a huge pendulum, you could get quite dizzy from the motion if you don’t concentrate on something other than the inside movement.

For three days we wait out the weather in the Cove.  There is no traffic in Reid Channel until the afternoon of the third day.  Waves in the channel have built to four feet so when we see a troller heading south in the channel it is hard to read the size of her; the back deck is blocked from sight by the waves.  The Captain hails the troller on the radio,” little white fishing boat, little white fishing boat come in please.” Our radio per usual is not working properly; the Captain tries the call again and again. A more persistent call goes out, ”little white fishing boat in Reid Channel, across from Oliver Cove come in PLEASE!”  The reply finally comes back in heavily accented Portuguese English “Me-e-ester, she’s thirty-two feet long!”

Profuse apologies from the Captain are followed by a request for weather and sea conditions once the Portuguese boat reaches the lighthouse at Ivory Island.  Sure enough 30 minutes later, there is static on our radio, nothing that we can decipher, but a well-intentioned reply none the less.  More traffic appears, it’s a tug this time, heading north.  They have just come from where we want to go, perfect.  Request for sea conditions from the Captain, Tug Captain comes back with questions,” how big is your boat, what is your power; well considering your size and power you had better run for it, it won’t get any better in this area until spring.”

I lose the feeling in my arms again navigating the bumpy and nerve-wracking Sea forth Channel, but we make it to safe Harbour at Shearwater.

P.S.  This was a major storm with no boats running for three days, not even the tugs and those guys move in almost anything.  The B.C. ferry spent three days hiding behind or beside Princess Royal Island, I bet everyone onboard became great friends.  Follow the North Star concludes this string of three stories, with more great adventures on the other side, come join us aboard the Audrey Eleanor.