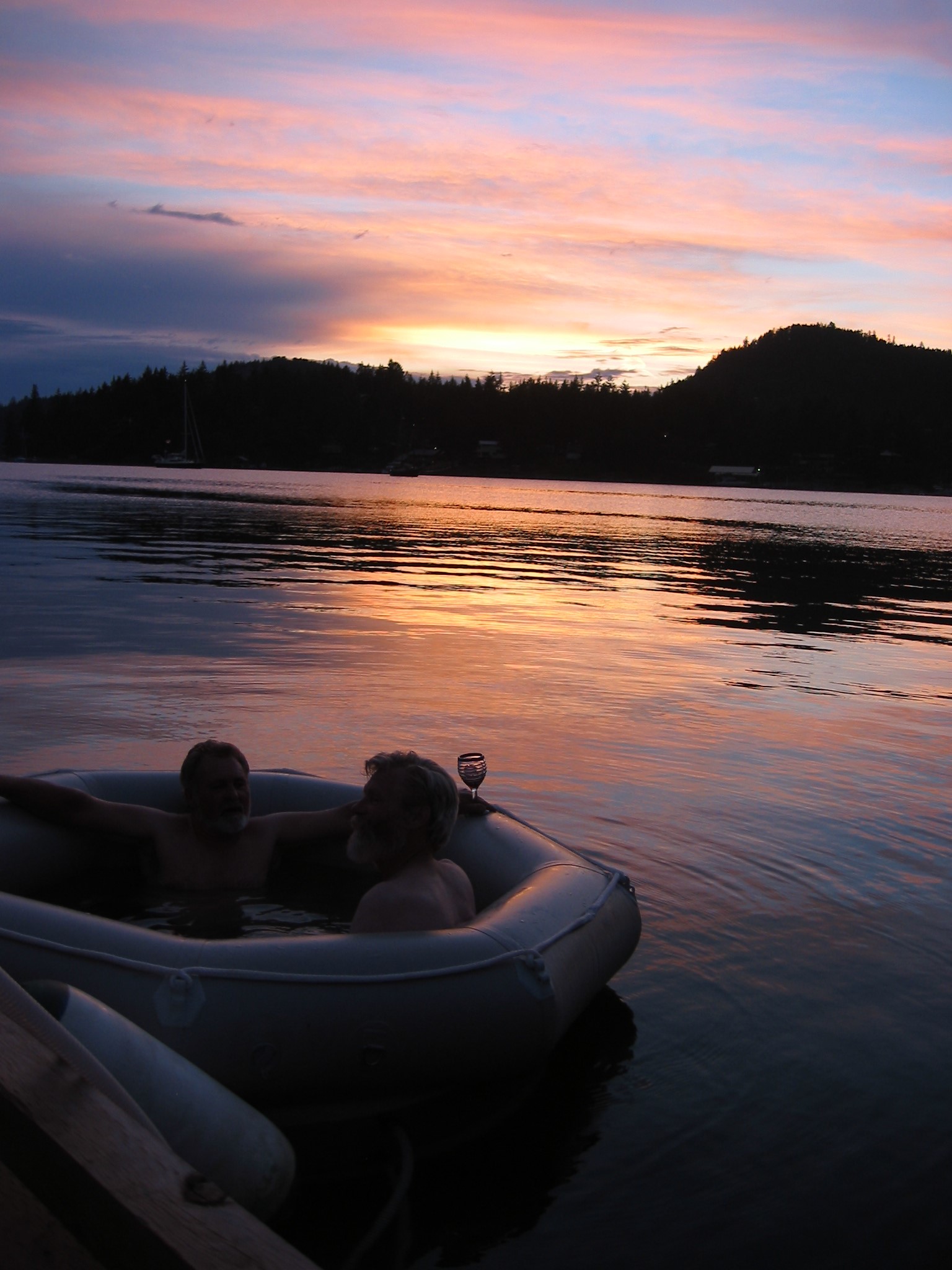 MAGIC 1 FLOATING UNDER THE STARS

It’s time for a little magic. The end of what we thought wasn’t a bad summer is drawing to a close. The locals in Pender Harbour and Madeira Park complain about climate change and in their minds, lack of a summer at all. I admit that it wasn’t as hot as I would have liked it, but the days were mostly clear and sunny. Diving directly off of the dock into the ocean had happened once or twice. To the Captains delight, some of the bar maids came down at night to skinny dip.

I finally got a chance to experiment with my new dry suit. It is a strange sight to see, trying to keep upright and walk half sub-merged around the docks causes people to do a double take when you walk/ flop past their boat way out past the shore line. We have a floating hot tub that we keep tied dockside so if the water feels too cool for a dip we just heat her up a little. I have to say that there is nothing that compares to hot salt water for relaxing or making your skin feel like velvet. After sanding the gunnels on the boat all day it feels wonderful.

Labour day weekend has come and gone and so have the crowds. After the solitude of living and travelling in the north, the crowds are really unsettling. Desolation Sound is well known and well travelled with southern boaters. It’s a skip and a jump for boaters travelling from Vancouver. Depending on the speed of their boats they can get to Squirrel Cove on Cortes Island in a day. Pender Harbour is a natural stop over; known as the Venice of the North, it has beautiful, secure little coves, several waterfront restaurants and bars and the “Royal” Yacht clubs for both Vancouver and Seattle. While the club members hadn’t been the most friendly of folks, over the summer they provided all of us summer locals with great entertainment.

The Royal Yacht Club ships are magnificent to watch coming into harbour, you can almost walk across this bay on anchored yachts. Dodging them with the zodiac to get to the Garden Bay Pub takes skill. We have airplane wheels on our zodiac, this makes us run a little lower in the water and we create a bigger wake then we’d like. It’s slow going but allows for a bit of conversation with the little guys. The Yacht clubs are a “member’s only” situation for moorage or participation. Well when the big boys with the big flags arrive, it’s like watching elephants trying to step through a field of mice and not squash them or worse get their feet dirty.

Consideration for fellow boaters seems to depend on size and anything below the extensive gunnels of the ‘ Royal’ yachters is almost none existent as they motor toward the Seattle yacht club. In their wake the little sailboats truly look like pendulums in clocks as their owners attempt to maintain themselves topside with their barking miniature dogs and sloshing martinis.

Sound carries very well on water, verbal challenges charge across the harbour flying back and forth accompanied by the scrapping sound of metal on fibreglass. With the distraction by these colourful words one Skipper has forgotten that there were only two feet separating him from the boat on his portside, he now has managed to secure that neighbours anchor line as well. The angry voices now arrive in stereo. Ah-h-h life in the densely populated south!

The Captain is not a sports fisherman, he subsistence fishes. Isn’t it amazing how really basic forms of words have changed as the lack of understanding them grows? He fishes to feed us. The price of a small Dungeness crab at Madeira Park is $25. The price per pound for fish of any type is out of this world; this is all incentive to go fishing. I love rockfish and have even before they became a trendy type of food. Rockfish has become trendy because of the lack of salmon, cod or halibut. I once had to process 60 lbs of Hake fillets that I was lucky enough to come across; it’s a beautiful delicate fish.

We spend a lovely day drifting around the small islets in the mouth of Pender Harbour looking for rockfish. A time warp happens, six hours of floating on the ocean drifted by and we have nothing but a suntan to show for our time, it is perfect. But we really did want to catch some fish. We would obviously have to get out of town if we wanted to catch anything of a size for eating.

The timing is right, most people should be gone, we could head for Cortes Island, circumnavigate it and do some exploring in our old haunts around Read Island…it is time to go fishing. In peak summer months your anchorage has to be established by noon in order to find the room to set your hook. Shore tying then becomes necessary so that you do not to swing into your neighbour. It is very crowded, for the free spirit, the guidebooks have listed numerous small-protected coves as anchorages. They state that these beautiful little coves will provide privacy. This is so that you need not listen to your neighbours music or dog barking at EVERY seagull. (No, this is not so cute)

The guide books must have been published prior to fish and shellfish farming, just about ever bay listed has now been partitioned off with nets, floats, logs and very strong “don’t even think about getting close to us “ signs…all fish farms. It’s a segregated area, yachties to their space and the working fishers to theirs. Boat wakes wreck havoc on shellfish farms where mussels and oysters dangle in the salt brine on tenuous lines.

Stories of sport fishers spending a week to get a single salmon are pretty common. They have way more patience then we do. Why oh why do we allow commercial fishing in the mouths of spawning creeks and rivers people? If they can’t go home to make babies there will be NO fish. And where is the crab? The Captain truly is the crab slayer and all summer had only produced a few small rock crabs that still needed to grow up. They were sent home to the deep to develop some bulk. We want to head into less populated areas where there still might be some fish and crab left.

Audrey leaves the dock at Pender Harbour and we head up Malaspina Straight towards Powell River, Texada Island is on our Portside. It’s slightly breezy, but still hot enough to get sunburnt on the flying bridge. Just past Powell River and before Savoury Island I notice something strange in the water. The Captain slows us down for a better look.

Curioser and curioser, there is a seal in the water with a 15 lb salmon in it’s mouth. On each side of him are two seagulls both determined to steal his dinner. This seal is not concerned in the least; he is more interested in watching us motor past. The gulls are playing tug of war with the salmon and he just keeps on watching us. Slowly, and seemingly without breaking the water he sinks out of sight, with his fish. It’s a sign. We continue up past Lund and drop anchor in the Copeland Islands. Tomorrow we head for Squirrel Cove on Cortes Island.

The distances here are deceptive; everything is way closer than in the north. The next morning it only takes us an hour to arrive at Squirrel Cove. The floating bakery is closed for the season and there are two other boats already anchored here. With most anchorages in the south you need to have holding tanks for sewage, a very good idea as I can only imagine what kind of sludge there would be in these low flushing inlets with the populations that visit here.

There is an oyster farm in here as well, regardless of the holding tank rule we decide not to buy their oysters. The two little sailboats don’t look big enough to hold their crew, never mind a holding tank. Regardless, the water is crystal clear with starfish waving their arms at the oysters.

The moon is full and the stars are low enough to touch. Small lights twinkle off in the distance onboard the sailboats. We slip into our floating hot tub. The hot salt water closes over the aches of the day. A long line gets attached to the tub and we shove off into the soft darkness. Laying back watching the satellites and falling stars in the quiet black night drifting softly with the tide, if you reach up with your hand I’m sure you can tip the big dipper and get a drink, wouldn’t it be nice if it was tequila…. we are afloat under the stars. (The water in the tub is really, really warm!)

This is magic 1; the next storey is magic 2.