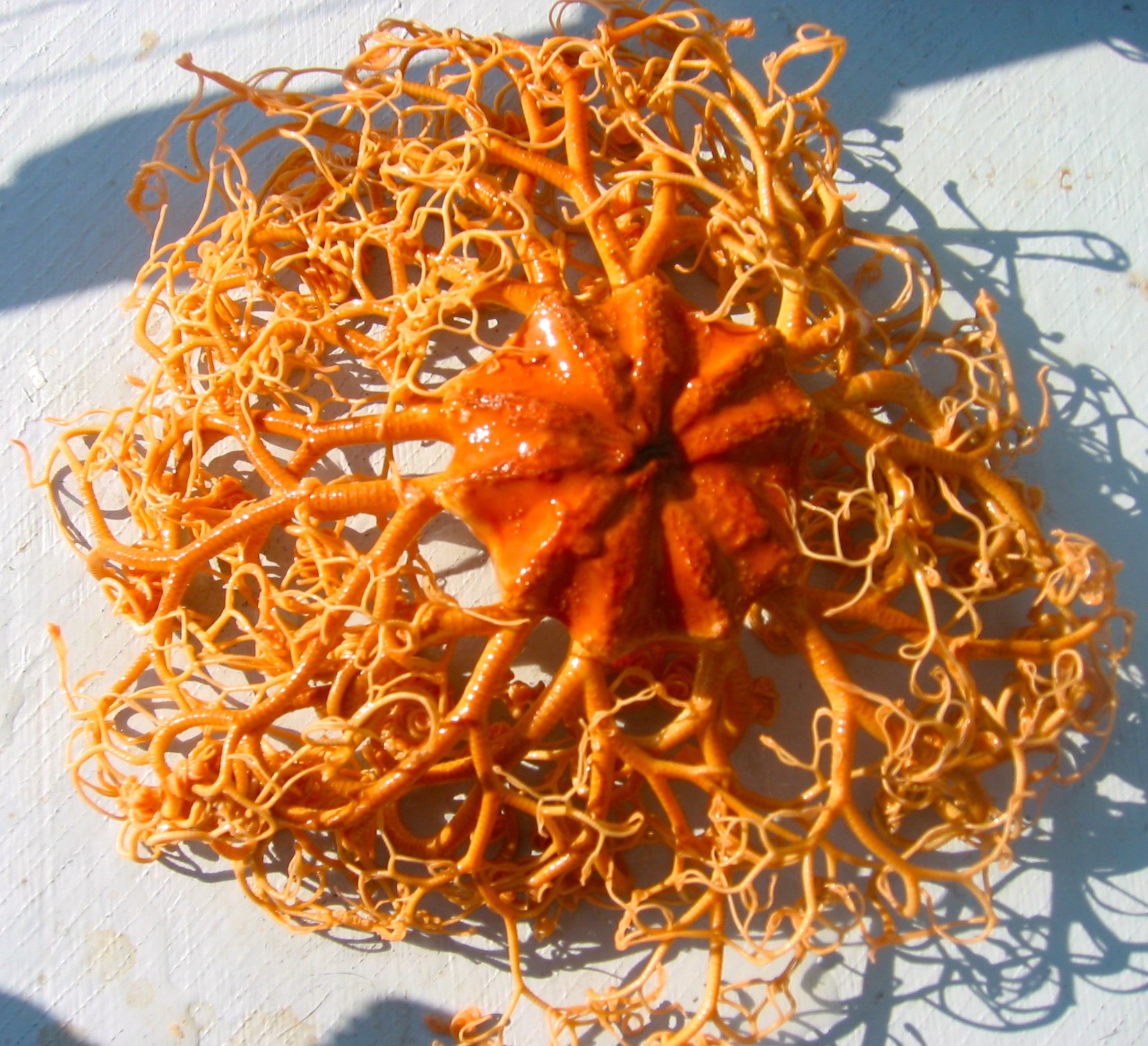 THE ADVENTURES OF THE AUDREY ELEANOR
MAGIC 2 UNDER THE SEA

In the previous storey we left you while we were floating under the stars in the hot tub.

There is a small community in Squirrel Cove. The general store is well stocked and has a decent marine hardware section. This is our introduction to “the oyster man”; he is located on Cortes Island and supplies a few of the local stores with his product. Locally grown and smoked oysters, amazing. The cans of oysters are way too small no matter size they are.

We decide that we need to stretch our sea legs and walk north along the paved road that leaves the General Store for other points on Cortes Island. In the ditches we discover the end of the summer’s crop of blackberries or brambles. I have picked these berries before. I refuse to climb down into the ditches telling the Captain that I preferred to stay as far out the brush as I could. The things are infested with snakes…he laughs at me.

I can see this funny look come over his face as he steps further into the brambles, the thorny brush rips your skin, but that look on his face tells me that he isn’t parting with his skin, I bet he has discovered the “snakes!” Sure enough, he says hmm…there are snakes aren’t there. I take a stick and pull the thorny branches back; the earth is writhing with garter snakes slithering just out of the reach of my stick.

Between us we pick lots of berries for jam and a few extra pints get dedicated to a beautiful blackberry tincture. (Ask me about this stuff)

There is a trail that connects Squirrel Cove to Von Don Up Inlet on the opposite side of the Island. We plan to anchor in Von Don Up so passed on walking the trail. We roared back to Audrey in the zodiac, pulled anchor and left to seek out another adventure. The water in this area has been reported to get as warm as Mexican waters; the oysters grow huge here because of it. This time of the year I preferred to laze in the hot tub.

Von Don Up is a long narrow inlet that allows you deep access into the mid section of Cortes Island. Again, we are not alone in what is considered a late time for travel for this area. There is an eye-catching yacht, custom built in Holland that is anchored in the centre of the bay. The lady from aboard this vessel is a larger sized woman. The custom-rowing skiff has obviously been built for her. She skims across the water with total ease and grace, it’s wonderful to watch. She looks free and light, as she appears to escape the weight of the world.

We have difficulty setting the anchor; the bottom of this bay is all sand. The anchor sets us within talking distance of a 65’ sailboat. Two teen-age boys are swabbing the decks. They come with additional family members that total twelve. They have been living on the sailboat for two years, wintering on Vancouver Island. It is an amazing feat; they are all home schooled by their parents. There would be no escape space anywhere onboard this sailboat with twelve people, you would be praying for good weather.

The set of the anchor concerns us so our trip ashore is short. We are on to the next stop, Gorge Harbour. The entrance to this harbour is impressive. Narrow natural rock face cliffs complete with ancient rock drawings guard the passageway. The channel opens into a large bay the centre of which is a large shell fish farm. The sky is streaked with pinks and purples; it’s time to settle in for the night.

We decide to splurge and go ashore for dinner. There is a commercial dock to portside and with a little house beside it has been converted into a restaurant, it looks magical. The anchor is dropped and we roar ashore for dinner. The water that drips off of the oars is glowing with phosphorous, we are leaving a trail of twinkling lights in the black water behind us, Fairy lights in the Ocean are unbelievable.

Dinner is wonderful, sitting on the little deck with lights twinkling on the shore and reflecting off of the still water. The smoked black cod was the best that I’ve had and that means beating out the Empress Hotel in Victoria for first place. The night is so calm that the candle on our table barely flickers as it casts shadows on the wine glasses.

The next morning we reluctantly haul anchor to cruise to Read Island, we are going fishing after all. Evans Bay by Read Island is a new anchorage for us. There is a house for sale at the head of the bay; this is a sparsely inhabited area. Once the anchor is set however, a small boat heads our way. They are an older couple and they own the house at the head of the bay, their house is for sale. The Captain asks about crabbing in the area, the response is that they have been here for twenty-five years and there are no crabs. Damn is there nothing left anywhere in this south country!

The couple is heading to their winter home in Campbell River, health has dictated that they spend time closer to health facilities; this is why their island home is for sale.
The fishing gear needs to be sorted and with our heads down we don’t see the tidy little Grand Banks named “HERS” approaching. There is a persistent knocking on the hull, up come our heads as the visiting Captain hands over a large slab of cod…”hope you like fish he says, just caught it this morning.” He also is heading for Campbell River to pick up his wife, after all the boat is “HERS”. They live in Los Angles, but keep their boat moored in Seattle. Business brings them to Seattle often so they keep moorage and use HERS as their floating apartment while they are there. Holidays simply mean cruising away from the dock. I’d never thought of AUDREY as waterfront property on the Sunshine coast, it was a different perspective.

Following his directions we set out to become the fish slayers. On the first cast the Captain lands a two-pound sea perch, good that’s supper, but not so. He says its bait for the “big” one, yeah right; it would have to be a giant to chase that bait. It is a giant; the cod that almost immediately swallows this perch looks too big to pull into the zodiac.

Have you seen the size of the heads on those things! He’s going to eat us. The cod is four feet long with an overgrown head; the cod head will be crab bait, what the heck you never know till you try right. That is, if we can fit the head into the crab trap minus his cheeks. As the giant cod is gaffed and held to the side of the boat he lets go of the perch. The perch executes a mighty twist, wrenches the hook from his mouth and swims away, perfect!

The sky is red this evening and a strange light is reflecting up from the depths of the ocean. We decide that we will watch for the evening star from the front deck. The dimming switch on the stars is being turned up brighter and brighter. Thick billowing rain clouds are building and rolling towards us. As the evening skies darken eerie lights start to appear in the black water. My favourite, there is phosphorous here.

Jellyfish show up first, outlined in electric blue and pulsating. Now we see tiny flickers of darting light as tiny and usually translucent bugs begin to appear. There are out lines of fish darting after the bugs. They show up as submersed comets in the water. The ocean is pulsating with millions of flickers and streaks of light lined creatures. The sensation that the ocean is breathing intimidates me; the whole sea is boiling with life, it is a living entity. Millions of creatures are now visible to the naked eye; the thought of swimming in this soup of life makes even the well-seasoned diving Captain think twice.

The rain hits in huge drops.

Now we are Disneyland. The giant raindrops hit the water and explode in a million reverberating droplets that burst into showers of light. The hills and bay are glowing in green light. Creatures below the surface appear to be swimming in thickening lime Jell-O. Torrents of rain bounce against the surface of the ocean and we are driven inside. The pounding raindrops flash back green light and illuminate the saloon …this really is magic!

P.S. We did catch three edible sized crabs in our trap; they had a tight squeeze getting in beside that cod head. Attached to the bottom of the trap was a basket starfish; we had come across these outside of Haines. I am glad that we had seen this before after last night we might have thought that we’d captured a sea going alien.