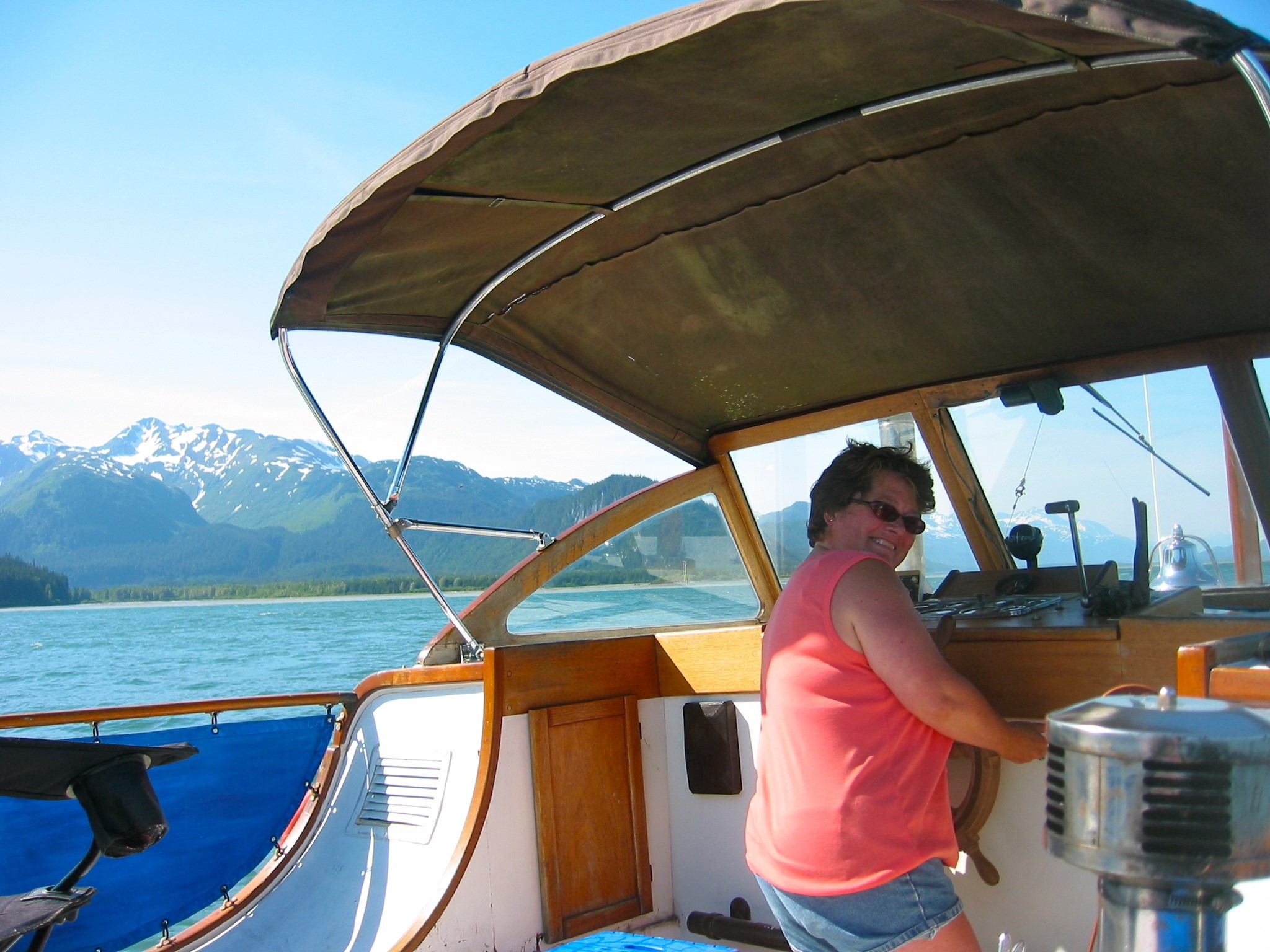 I am glad to have my clothes on, the author Dawn kostelnik at the helm of the Audrey Eleanor motoring from Juneau Alaska to Haines Alaska

It is a beautiful HOT spring day as we leave Juneau, Alaska (the capital city of Alaska) heading for Haines on the last leg of our trip to home moorage in Haines, Alaska.  We are crewing our 1948 wooden Yacht, the Audrey Eleanor from Prince Rupert, B.C. Canada

The sky is a brilliant blue that is matched by the swells on the ocean.  Without the snow tipped mountains as a break it would have been hard to tell where sky ended and sea begins.  The gentle rolling of the swells is rocking us to sleep as the heat builds; the sun is finally radiating some warmth. The golden rays are penetrating our bodies, wave upon wave of warmth.  Equally, layer-by-layer our clothing is coming off, it is finally summer.  The flying bridge on Audrey is portioned off from most views by a two and a half-foot barrier of blue canvas.  If you are lying on the deck on a lounge mat as I am, you cannot be seen by anything less than a cruise ship at close range.  There is no chance of that.

The warmth of the sun feels wonderful; my inner core may actually be defrosting after another long winter.  Both the Captain and I have little left on in the way of clothing. We are cruising through isolated Alaskan waters, who would want to sneak up on middle-aged nudists. The Captain is at the helm clad only in his boxers, I think he could remove the hat. I must have dozed off in the comfort of the sun; I wake startled from a deep sleep to “starboard, starboard!” I roll over to the rail and pull myself up to take a peek overboard.

A Grey Humpbacked whale mom breaks the surface of the sea with a gentle sway of her giant tail; her baby energetically celebrating its new life by jumping for the sun.  It circles its mother and leaps skyward ‘grabbing air’ and landing with gigantic baby belly flops.  The residual waves are large enough to sink a kayak.  This is a good-natured mother.  She slows down to allow for the special playtime.  You can feel the joy of the baby as he tries again and again to reach the sun.

I am totally focused on the baby whale. My concentration is broken by an evil little chuckle vibrating in the Captain’s chest.  This is the sound of a deviate, I know this sound, this sound means that somehow I am about to be embarrassed; someway, somehow.  Being so absorbed in the whales I hadn’t noticed the cruise ship approaching us directly from the bow, it appears to be on top of us.  This is one of the smaller ships that offer a more intimate cruising experience.  Their experience with the Audrey Eleanor and its crew is way too intimate for my liking.

Whales are now swimming off towards the Icy Strait ‘aquarium.’  The happy family is hedging out of view of the binoculars wielding crowd that hangs over the rail of this ship.  This little ship sits higher in the water then Audrey Eleanor does.  They will soon have a direct line of sight into our flying bridge.  With the whales gone they are looking for new material to query with their privacy invading extended eyeballs that hang by black idiot strings from their necks.

My clothes are hanging over the back part of the rail on the opposite side of the deck.  I am trying desperately to meld with the blue canvas wall that is my only source of cover from a hundred prying eyes.  The passengers are waving enthusiastically at this classic lady (Audrey).  As her bow slices through these brilliant blue waters, she creates a magnificent picture.  They are probably trying to figure out what that disembodied head is doing crabbing along the rail behind the blue canvas.

The ‘head’ is cursing the laughing Captain who simply has stepped down into the cockpit; he quite frankly doesn’t care who sees him in his underwear.  He would not care if he weren’t wearing underwear either.  They haven’t realized that there is a naked, panicked first mate crawling along the deck behind the canvas trying to maintain just a little dignity.

Just as I am deciding that moments of misery by being exposed while I grab my clothes is possibly minor, compared to being pinned down nude behind the canvas indefinitely, their ship swings to Port side; something else has caught their attention thank goodness.  The Captain is howling in glee, I don’t like him sometimes.

We are now north of Auke Bay; we had spent three days moored at Douglas Island.  At full moon the tide can rip a bit in front of Juneau.  We are in the land of the Midnight Sun so visually being able to tell if the moon if full or not can be problematic. We appreciate the tide charts.

Approaching Juneau from the south we had timed our arrival to coincide with the flood tide to make mooring as easy as possible.  The wind had been howling and clawing at our backs for days prior to our landing.  We tried to raise the Harbour Master as we searched for transit moorage.  Call after call goes out, as we get closer to Juneau.  No one is coming back on the radio. We pass the U.S. Coast Guard; the crew on board jumps to attention to give us a full salute us as we pass.  This is an unexpected compliment; the hours of sanding and varnishing are paying off.

Audrey is now in the middle of the boat maze that is the downtown harbour.  Still no response on the radio, we will have to back out of this mess.  Bow spites on sailboats turn up as bow piercing spears where they shouldn’t.  The Captain is best at backing up. We are back out in the channel that is now a racing tidal river. The tide is ripping and the wind is whipping up water as it pushes and shoves against the running tide.  We head for safe moorage at Douglas Island.

The response we have been waiting for on the radio now comes through.  “Hey, are you guys in that classic old boat?”  “Would love to see her close up, sorry no moorage, we are moving boats out right now, try Douglas Island!”

Douglas Island is on our Starboard side, it’s difficult to see the entrance to the Marina.  There is a long rock wall that appears to run in a continuous line, we can’t see the opening into the harbour.  The Captain does not have the luxury of taking his time; the tide is running hard so we have to go in under full power.  He swings us blindly and hard to Starboard; common sense dictates that there has to be an opening at the southern point of the rock wall, we can see sailboat masts behind the wall, but where?

YES!  Right in front of us is the rather small opening.  It may only seem very tiny as we arrive under full power backed up by 30 tonnes.  I am standing on the bow with the ropes ready; I hate this part of mooring.  There is a 4-foot drop from Audrey’s bow to any surface.  Sometimes there are rails on the docks, sometimes-giant cleats and in Petersburg, Alaska; there is a solid length of pipe to secure your lines to.  I landed on that pipe once; it really hurt.  There is no one else, I AM THE CREW!  I ready myself for the jump to the dock and prepare to secure our lines.

Looming up suddenly and directly in front of me is a solid steel pillar. We are on a collision course with direct and immediate impact.  30 tonnes of ship will not slow down in this limited amount of space and time.  I drop and flatten to the deck; I can visualize my toes clawing through my shoes trying to anchor me to the strips of teak on the deck of the Audrey Eleanor.  I see me splatted against the steel pillar and sliding down into the water in classic Road Runner style. I wait for the impact…and wait, time has changed into slow motion and impact doesn’t happen.

Looking up I can see a man and woman standing on the dock watching this performance, I jump to my feet and throw them the rope in a flash, they quickly tie us up.   After taking a deep breath I look around trying to figure out what has happened. The Alaskan fisherman on the dock yells,” Man that was some bad assed boat driving!”

Audrey has her nose stuck into a 25-foot slip leaving 30 feet of her aft end blocking the entrance to the rest of the marina; the Captain looks a little pale.  My eyes query him, ‘how did you do that?’ He simply shakes his head.  The Harbour Master shows up, he has an amused look on his face.  “I’m sure you know that you’ll have to move your boat,” he says, “you are kinda blocking the harbour.”

I can see that he’s having difficulty keeping his laughter under control.  The Captain says “I think I should sit up on the top deck and have a beer before I do anything.”  The Harbour Master is a great guy, he throws us the keys to his car and says,” you might want to go into Juneau and buy a whole case.” We had use of his car for the three days that we were there.