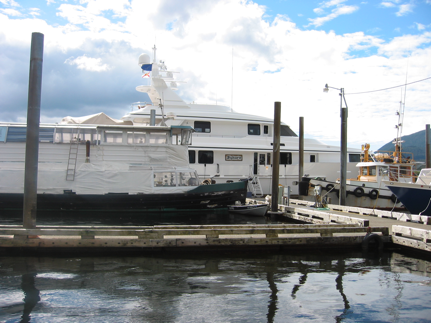 Taking On The Big Boys

YUKONERS FELL IN LOVE WITH A 54’ 1948 WOODEN YACHT. FROM JUNE OF 2008 UNTIL DECEMBER 2010 A WORLD WIDE FOLLOWING READ ABOUT THE ADVENTURES OF THE AUDREY ELEANOR IN THE WHITEHORSE STAR. WE ARE PROUD TO BRING THESE ADVENTURES TO YOU ONCE AGAIN.

THE Captain, Rick Cousins spent the winter retrofitting Audrey in McLean’s shipyard in Prince Rupert B.C. McLean’s shipyard is reputed to be one of the oldest working shipyards on the west coast of Canada. This a great place to be when you have an old boat. I had to return to Whitehorse, as our home there had been flooded. The three-week restoration work on the house turned into a four and a half month project from beyond belief. I don’t wish an insurance claim on anyone.

By the time the Alaska State Ferry dropped me off in the terminal at Prince Rupert, the Captain had made the most of his winter. With the help of our friend Bruce Cairns, he removed old rusted fuel tanks from the hold and built new tanks to replace them. This is not an easy thing. You have to remove these tanks through the back wall of the stateroom so the aft deck had to be modified. Rick decided to install sewage holding tanks in the back head (toilet), the foc’sle already had one. Our plan is to visit marine parks and areas with low flushing bays; you should take your poop with you when you go!

In January, days before I was forced to return to Whitehorse the temperature dropped to minus 12 Celsius in Seal Cove at Prince Rupert. Minus 12 on the black ocean is bone chilling cold. Salt water does freeze and so does toothpaste; walking on the docks and gunnels is dangerous. Falling into a bay of liquid ice will end life. There are few persons crazy enough to be out on the docks; McLean’s shipyard has shut down their operation until the weather warms up. There is no one out here to rescue a sinker in the sea; it would be difficult to drag yourself out, clawing over iced boards.

The cold makes getting into bed a serious challenge. The challenge is who can sit up the longest so as not to have to be the first one to crawl between the icy sheets. We have since learned that if power is available, an electric blanket is your best friend…it gets rid of the damp, as well as the cold.

It is now finally springtime! The Audrey Eleanor is registered in Haines, Alaska; all that is left to do is paint her serial numbers on her bow and her name and port of registration on her stern.

It’s time to cast off. Prince Rupert has been Audrey’s home for the past twelve years. We purchased her in the summer of 2003 and are finally taking her to her new home in Haines Alaska, we want her as close to Whitehorse as possible. As the raven fly’s this will be six hundred kilometers north through the famous inside passage. It will be our maiden voyage, but most certainly not Audrey’s.

Both Rick and I have extensive and varied fresh water/wilderness skills. Rick has flown bush planes, retrieved planes from lakes, built boats, and welded underwater from the Arctic to the Antarctic. I grew up on the Mackenzie River and on the coast of the Arctic Ocean. Armed with a powerful dream, the Canadian Power Squadron Navigation course and more enthusiasm than experience, we are headed “NORTH TO ALASKA”, yeah Johnny Horton!!

Rick has concentrated his energy on ensuring that his Perkins engines purr.   We hear horror stories of crossing the infamous Dixon entrance. Rick wants no hesitation in the engines in the event of a rough crossing; the man is a psychic. We are ready, the seas are calm, a few wisps of fog give depth to the majestic mountains, it’s six a.m. and we are under way. We are heading home, North to Alaska; go north the rush is on!

This is wonderful! Audrey’s stately bow slices through the sea. We traverse the shipyard maze and are cruising past the floating Esso fuel docks. Not too bad, we begin to feel cocky enough to consider docking at Cow bay and running up for a coffee to go. Docking a yacht of this size, she weighs 30 tonnes, especially without a bow thruster is intimidating the first hundred times you try it. The Prince Rupert Yacht Club is straight ahead. There are two multi-million dollar U.S. yachts tied to the north end of the dock leaving plenty of room for us to bring our bow in.

The Captain steers Audrey’s bow straight on to the dock with the intent of gently swinging and bringing her stern alongside. Suddenly the current grabs a handful of Audrey’s thirty tonnes, we have no control. We speed up and are on a bow on beam collision course with those shiny metal mini-ships. The huge steel bows of these metal demons look determined to thrust themselves through Audrey’s oak ribs and pierce her Perkins hearts. The thought of a probable lawsuit brought on by the south of the border boys pierces my heart.

I throw out our now ridiculously small bumpers and prepare for impact. The big boys we are about to impale ourselves on are confident enough in their bulk that they have no defense bumpers dangling off their sides. What’s a girl to do? Throw herself in front of her yacht of course.

I have no idea what is going through my mind. I am five feet tall with a medium build, but I must be super woman! I position myself between them and us, I WILL BE THE BUMPER! I do manage to slow us down enough so that when impact occurs it isn’t significant enough to even wake the sleeping crew. At least the lights don’t come on. Now what? I am wedged between grinding metal and petrified wood ships!

How does it feel to be the human filling in this sandwich you ask? I realize how deadly the situation is when I look up to see that the Captains face is deathly white, I am having difficulty breathing. Rick is slamming levers and manipulating the throttles trying to get us off these guys. Audrey’s thirty tonnes are slowing grinding down the steel sides of the yachts with me acting as the resistance between them and us; this is not fun anymore.

The Goddess returns and the tide turns, stops or whatever it does. Maybe the Captain figured things out and like nothing had ever happened, we gently swing back out the way we came in. I can breath, the yachts sleep on and we don’t have to sell all of our future grandchildren to satisfy a possible lawsuit.

“God hates a coward.” We will try this docking thing again. Besides now we really want that coffee. We have a new approach and Audrey gently swings into place beside the big boys on the dock as if to say “hey boys, that’s all you get.” We wobble up the ramp to Cowpuccinos in Cow Bay looking for coffee; Tequila would have been better. So what will Dixon entrance bring…if only we knew then what we know now? That will be another one of the Adventures of the Audrey Eleanor.

8 thoughts on “ The Adventures of The Audrey Eleanor- Part 1”