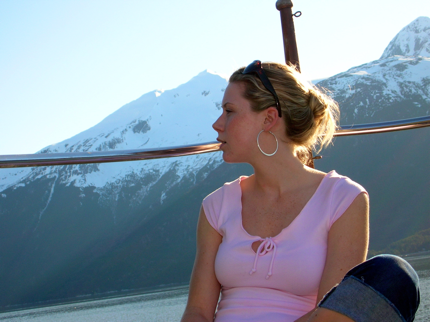 The Girls on The Docks

There are few women who live on the docks. When I happened to meet these women there an instant kindred connection. Our conversations are about boating, but with a feminine twist. One of my many rants to my kids is; the more you know, the less you will learn. It is great to listen to the experiences of these ladies. The information they pass on is exceptional and has contributed in unusual ways to my life, to this day.

The curiosity of it is that the three women whom I recall most clearly were named Jenny. These were my first teachers. Jenny off of the Jenny B in Ketchikan, Alaska, was the floating dentist’s wife. Jenny from Smithers, B.C. she and her husband were retrofitting the Debby J in McLean’s shipyard, and little Jenny, the dock handywoman who went places that most men can’t.

Jenny from the Jenny B is an enigma and would be anywhere that she went. She and her husband built the boat, Jenny B from the hull up. The boat progressed in stages and as her children grew, so did the boat. They raised two daughters aboard; the girls finally went aground when they needed to attend university.   Their mother home schooled them while they floated through Alaska for all of their childhood years.

As the Dentist’s wife, she was also his receptionist. She met clients at the stern and escorted them into the dentist chair, then helped them off the boat with a smile and a Kleenex. We arrive onboard for tea; she appears in the saloon with her usual, perfectly coiffed hair, a blouse and skirt with one of those little frilly aprons that matched her shoes and nails. It is amazing,

I am ecstatic if I manage to haul the laundry topside and have clean socks. How does this woman do this? In addition to maintaining this immaculate, if unusual appearance, she cleaned and sanitized all of the dentistry equipment and had dinner on the table by six. In her world this is how it was done.

She was by no means a plastic lady. This is her style and by the goddess she can take charge of the helm, read the charts, tie her boat up or drop the anchor whenever needed.  Men rule the sea, she contributed to the feminine. She is truly a good person and a very nice lady. The fishermen went out of their way to be courteous to her; she added a wonderful softness where there is little of it.

The Jenny off of the Debbie J is a formidable lady. The first sailboat that she and her husband bought was a 35 foot something, she wasn’t sure what. They took a crash course in sailing on a weekend in Vancouver and then set out onto the briny sea. She said that it took several weeks for her to relax and realize that the great walls of seawater weren’t going to crash down and swamp them from behind. They were out in the blue water and onto 35’ swells.

They went from the 35’ mystery boat to a 65’ Robertson steel sailboat. Their kids were growing and by now they had sailed south to Mexico and through the Panama Canal, they had been at sea for a year, it was expansion time. This type of expansion is not to be confused with one ‘footitis’, which is common in boating circles. The ‘footitis’ virus (I think the strain originates in Texas) attacks people who think that they need one more foot of boat for whatever reason. Commonly the reason is either to haul more “stuff” or to keep up with the Davey Jones’s.

We have a rule on board Audrey that we now carry over into our shore lives. If you bring something aboard, you have to take something off. This makes you pay attention to what essential truly means. Does it nourish you? Keep you warm and dry or provide you with healthy diversion? (Books and music are essential by the way) How much do you really need? Stuff weighs you down, it anchors you on the hard and it sinks you at sea.

Back to the 65’ Robertson, they had engine problems outside of New York harbour and were going to have to come in under full sail. Coming into any harbour with a large boat is hard on the nerves, an unknown harbour is extremely painful, and a New York type Harbour on any day of the year is my nightmare.

Jenny said that they had to choose between their love of living at sea or paying to insure their sailboat, they chose their love. They did not insure the sailboat, they were prepared to step off of the boat and hand over their keys if they encountered a problem. Into the harbour under full sail they come! Kids are in their positions with mom and dad at the helm praying hard.

People are scrambling over each other trying to get their precious boats out of the way of this larger then should be free sailing boat. It is real exciting! Dad swings her hard to portside, there is only one space big enough to tie up, the kids drop the sails and they gently swing into the berth. Jenny said she stepped off holding the ropes, shaking in her boots, hoping that she would not throw up and praying that it didn’t show. A large crowd had gathered, with shaking hands Jenny calmly tied her up and said to the kids, “OK let’s do lunch.”

This Jenny explained to me that you never eat crab on your boat. Crab is served dockside on some kind of makeshift table with lots of good friends, wine and butter. You simply cannot get all of the small crab parts picked up and this attracts nasty critters that will cause grief in the long run. I know from personal experience that at sunrise the damned birds love to run around the top deck pecking at the crab pieces that I’ve missed. This dance floor is right above our stateroom; there is no sleep with the funky seagull going on above your head.

Because of her size she could fit down into the stinky bilges and fish holds that most adult size people couldn’t get into and wouldn’t. Her boyfriend was the shiftless kind, didn’t work unless Jenny absolutely couldn’t. He was known as “Rusty” on the docks. Whenever someone approached him to do a job of any kind, his response was always, “well I’m a little rusty at that,” hence he was known as Rusty to all.

Jenny would spend the whole day down in a tight, smelly, dark old hold working with nasty chemicals and come bouncing out at the end of the day with a big smile on her face. She was a voracious gardener. Her little trailer was an oasis in an otherwise tin can wasteland. When we left McLean’s Shipyard in Prince Rupert she gave me a clump of for-get-me-knots that I transplanted into my son Bob’s yard here in Whitehorse, forgot to tell you about that Bobby. I believe that they are still there.

May was an exceptionally hot month in Prince Rupert. Jenny had been mucking out the hold of a large tugboat that originally had been scheduled to be scuttled. A new owner had stepped in just before the final countdown. This big tug was a mess. Jenny was determined to make this tugboat shine. I don’t know what she was using for cleaning agents or for paints either, but she had spent the whole morning and part of the scorching afternoon swimming in toxic brine.

At two o’clock in the middle of this heated afternoon, she came wandering down the dock not her usual perky self, “are you alright Jenny?” “Yes came the reply but I think I’m dehydrated.” The water had been shut off on the docks and of course we had chosen this day to clean our water tanks. “How does a beer sound?” The big smile is back. “That would be absolutely wonderful,” she says. She perched on the sawhorse with her beer, took a big swig and fell over backwards, unconscious.

By the time that I got off the boat and on to the dock her eyes were wide open and she was staring in wonder at the sky. “Wow, what was in that beer?” was all that she said. We drove her home.

P.S. The Debby J was being retrofitted from a fish boat into a global gypsy. The 30’ troller had a gardener engine in her that topped out at 8 knots but only burned 3 gals of fuel per hour. The Debby J and crew were headed for South America, Chile in particular. They are probably out there still, we wish them well.