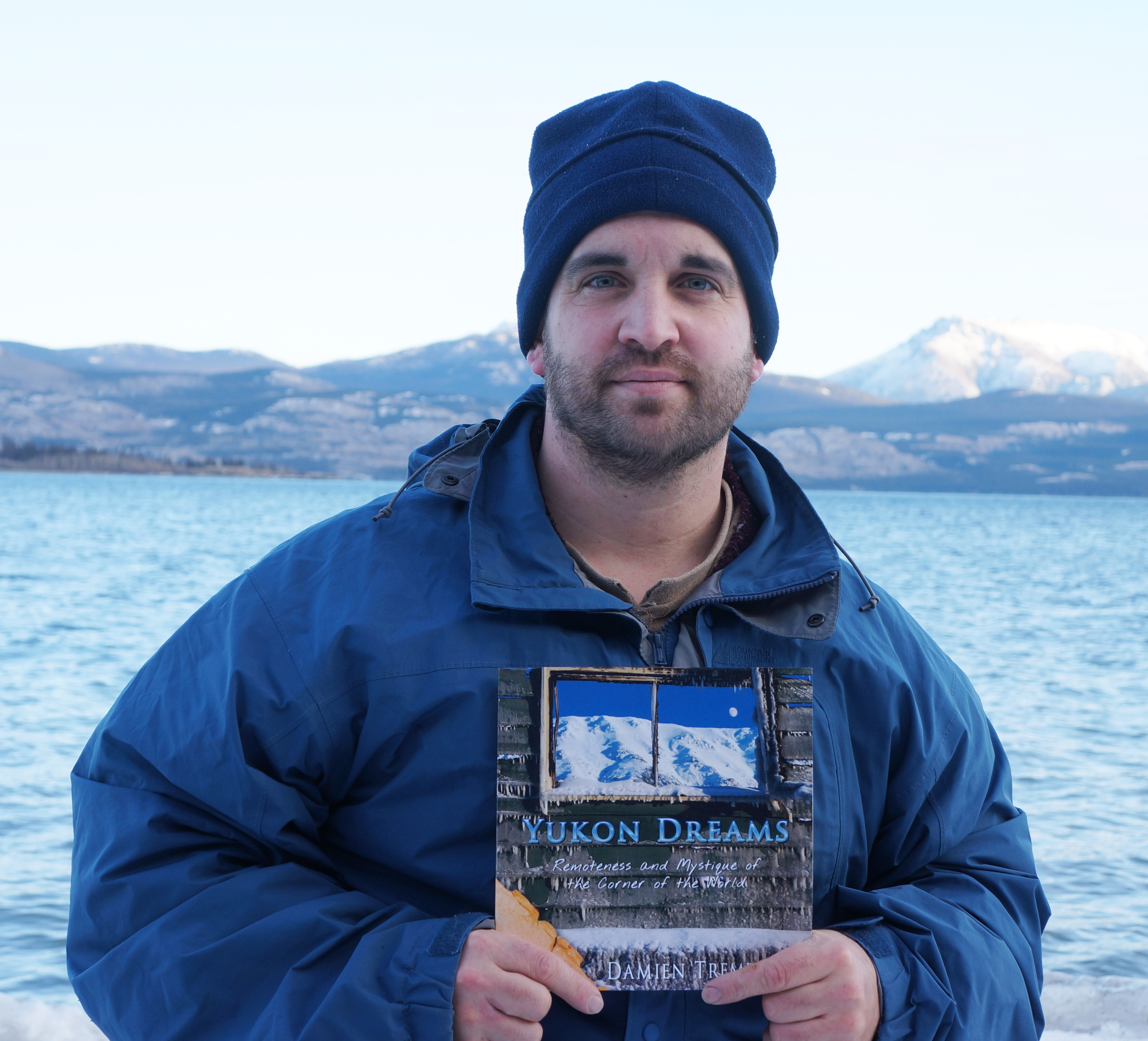 YT: Thank you so much Damien for coming to this interview!
DT: Thanks to you!

YT: Why did you write this book? I mean what inspired you to write this book?
DT: Well I wanted to write it because, well, I had read many books about the Yukon and the North in general. But I felt that– well, there was– the idea of remoteness was never explicit. It was always implied in those books, and it was more or less, well, omnipresent. But it was not very clear what it was exactly. So I wanted to explain it well – remoteness – what it was, and how it had an influence on people.

DT: It’s a very focused book, because I wanted to talk about remoteness, and everything that was around this idea. And for the Yukon, of course, there was a mystique of the place, there is a mystery surrounding the Yukon. Why does it attract so much? And one of the reasons, for sure, is remoteness, and one doesn’t go without the other. You have the mystique of the territory, and you have the remoteness. So, I wanted to explain that idea.

YT: Are you the fi rst writer to touch Yukon’s remoteness, or did any other writer make this kind of attempt, do you know?

DT: No, the fi rst clear and explicit attempt, I think, is with my book. But, of course, everybody
talked about remoteness in his book. Because it was– it’s omnipresent, again, in the Yukon. So, you can pass it. I mean, you have to talk about it. And in my book I quote many other books about the Yukon, or the North, and chapters or things that talk about remoteness. But I wanted my book to be an analysis of remoteness. That’s what it is.

YT: When did you start writing this book?

DT: About two years ago.

DT: Well, I did research at the same time as I was doing writing. Because I already had a lot of research done. Because, since my childhood, I read about the Yukon and the North. So I had that knowledge, that base of knowledge. I knew what I wanted to say. So I was able to both research it and write at the same time. But the writing maybe took a year.

DT: About that, yes. And, yes, publishing matters too, you know.

YT: Ok. Yeah, it involves a lot of things. Your book tells about Yukon remoteness. How far did you go to write about this book? I mean where in Yukon, like what places in Yukon did you travel to, for your research?

DT: Well, I will say first: there are different scales of remoteness. The territory, for example, is remote from big urban centers. It’s remote from most big Canadian cities, so it’s a few thousand kilometers away. So that type of remoteness, anybody can feel it. I mean, you feel it, I feel it – anybody can feel it. I mean, we don’t have the same services exactly, however, we have everything we want, I think. But, I mean, we are still far away from many places – from France, from India, from our countries. But, of course, you can go always deeper into the Yukon remoteness. If you go in the wilderness, you are deep, very far – you can be wild very fast! Sorry. So, I mean, my favourite place are the Ogilvie Mountains. So every year I go there at least once, or twice. I go hiking by myself in the Ogilvie Mountains. So it’s– I’m by myself for a few days in the mountains, in very remote and beautiful places.

YT: Can you name places? Like, where did you go for your research?

YT: You went to different Yukon remote places for your book to do study or research. So which area of the Yukon attracted
your attention mostly?

DT: The Yukon – all the Yukon, really. And I wanted to say: I didn’t fi nd it, really. The answers I give in that book are not really from the outside, what you could see from the outside. They are from within you – remoteness is about introspection. What is inside you, when you’re outside. So there is a paradox, you know – it’s more about you than the mountains. The mountains don’t care if they’re remote or not, we do. So it’s– talking about remoteness is an intellectual thing. It’s not something that you could guess looking at a mountain. You have to look within you, what’s inside you.

YT: In your book you mention the Peel River watershed. So what are your views about that region of the Yukon?

YT: Do you support the “Protect the Peel” campaign?

YT: You have studied Yukon’s remote areas. So what did you learn about Yukon’s gold? Is Yukon still a great source of gold? Did you touch this subject too?

DT: I talked about it, yes. Well, I would say: Yukon is still a good source of intellectual gold. That would be my answer. Which is found, well, in its wilderness, remoteness, and all of that. It’s in a world that is more and more built, you know, where there are more and more cities, where everything is connected. Well, you still have the chance to not be connected to anything here. To be distanced from time, from everything that the world is right now. So this is precious, for that reason. But, of course, I talk in the book about the Gold Rush and why those young men came, and what they did find. And most of them didn’t find gold. They found what Pierre Berton– they found maturity, you know, they became adults. And that was the gold. That was what they found, really.

YT: We talked about the gold and the Gold Rush. So what do you think about Yukon’s “cold rush”?

DT: Yeah, I don’t know exactly how to answer that. I would say that in the Yukon, well, there are people that have always lived here, like the First Nations. But Yukon is made a lot from people coming from elsewhere. And those people are coming for different reasons. So, well, for example, I came for– really for the idea of the Yukon; the wilderness, Jack London, everything I read about that book. So, I’m quite happy to be here, because it was a conscious choice. But I know that many people are coming here for money, for a job. And for them, I think many are very happy to live here. And some are not so much. Because, I mean, it’s– the Yukon we know is cold, too, is isolated, dangerous. So maybe those people don’t appreciate that much the Yukon, I don’t know. But, so there are– so it’s hard to generalize, to say.

DT: Yes, I think that Yukon’s remoteness is an asset, in many ways. It’s an asset, well because people are coming from all over the world for that. So, it has, in some ways, to be conserved, and– but, for sure, since 1942 and the building of the Alaska Highway, it has diminished. Less and less– well, we have more and more roads, it’s less and less remote, for sure. But it’s remote enough, you know. So, yes, I think we should try to keep it that way. But, I have to say, trying to keep things the way they are is very much a romantic idea. It’s a bit a crazy idea, you know. But, maybe I’m crazy too, I don’t know. So– but, still, why would you change something that you love? When you love something, you don’t want it to change. And that’s why I’m saying: well, let’s keep it that way. Don’t build more roads, don’t change it – don’t change the nature of it, because I love it that way. So it’s a very romantic way to see things, but it’s valid because I’m not the only one thinking that way. I’m not the only one, I’m expressing it, but I’m not the only one thinking that way.

DT: Yeah, and what I found when I wrote that book is that– well, talking about nostalgia– because, I mean, in the idea of remoteness, you have the idea you are separated from something. And when you’re separated from something, you have pain – you become- well, you can be nostalgic, melancholic, and all of that. And it’s important to say it, because in North America it’s not a very good thing to say your place is melancholic, because, I mean, everybody should be happy, should have a big smile, and all of that. But it’s important to say, because, I think, for the Yukon, melancholia is a good thing. Because it’s a source of artistic inspiration. It’s– in isolation, as I see, you can look– you can have introspection. And that’s why so many people paint, write, photograph here. Because of that light, positive melancholia. And that’s why I found it was the very essence of the Yukon, that melancholia. And remoteness and melancholia – it’s pretty much the same thing, to me.

YT: Is this your first book? How long have you been writing?

DT: Well, yes, it’s my first book. I’ve been writing for all my life, it seems. I was a history teacher a few years ago, and now I’m working in the translation you need for the Yukon government. So, I like words, I like play on words, I like poetry, and I’m an avid reader too – I read a lot.

YT: Were you born in the Yukon, or you just came to Yukon from somewhere else and fell in love with it?

DT: Yeah, it’s pretty much that story, yes. But I would say that I was already in love in the Yukon before seeing it. Because I read all those Jack London stories and all of that, so I was already in it. Plus, my father was a trapper in the Quebec wilderness. So every year when I was going in Quebec, I could see, you know, the North, and the forest, and animals, and all that. So, I mean, I fell in it in a very early age– at a very early age, so…

YT: Ok. So where did you come from originally?

DT: I’m from France, and part of me– my dad was from Quebec.

YT: What’s the price of your book, and where can people go to buy your book?

YT: It must be cheaper over there.

DT: Yes, it’s a little bit cheaper over there. Yes. And you can– sorry. You can have it as an e-book too, for those who like electronic books.

YT: What else do you want to say about your book, to the readers?

DT: Well, I invite them to read it, for sure. If they have questions, or– about remoteness, or if they are interested by the subject, yes, for sure. And if they are interested by the DNA of the Yukon, I think, the identity of the Yukon. I think, knowing more about what is remoteness will tell you a lot more about the Yukon than gold, for example. Gold is just– well, it’s part of history, but it’s not so much part of identity as remoteness is, I think.

YT: Yeah. So your book– summary of your book is that real gold of Yukon is its remoteness.

YT: Thank you so much Damien for coming for this interview!

DT: Thanks for having me!