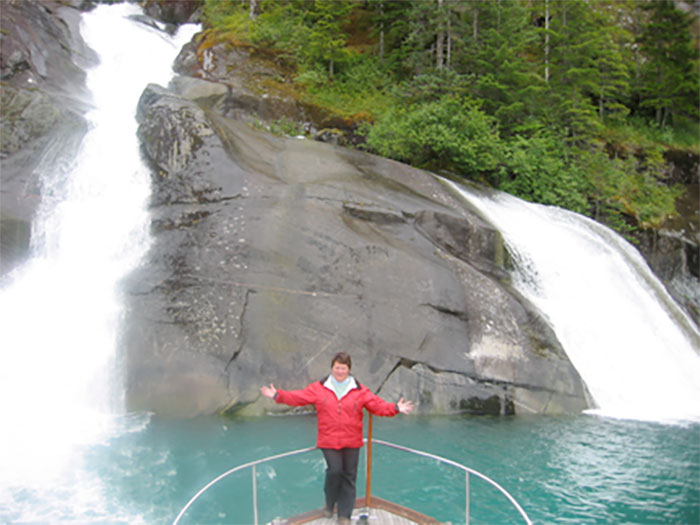 Word has gotten out that Tracey Arm rivals Glacier Bay for magnificent glaciers and stunning scenery. The ice walls calve and collapse into the ocean with a force that creates huge resounding waves. Waves tinkle the neon blue icebergs like giant ice cubes mingling with new friends in a crystal glass. This solid granite canyon must have been created when the earth experienced an extreme upheaval and the rock cracked like a hard-boiled egg to expose wide white bands of contrasting colour that offset the milky green water. This is the ultimate in exterior design.

Tracey Arm is south of Juneau, Alaska by approximately 50 K. Icebergs ranging from barely noticeable (bergies) to spectacular glistening jewels guard the entrance to Tracy Arm. Navigation is difficult because the ice can obscure the range markers at the entrance, or solid blue crystals block the pathway, “Bergs or bergies” do not move readily.

At low tide the whole procedure becomes quite interesting as swirls and tidal rips develop in the sea and mountains of ice sway in the current, intent on blocking your route…while we have had to do some tricky navigating to get inside, it is worth it.

Traffic has increased since we first explored this channel; the cruise ships now navigate the rock canyons. Depending on the year, the icebergs can limit your access up the 30 K channel and tides of course affect everything.

We are making our way south this time and cannot resist trying once again to get a look at Sawyer Glacier. A past attempt to reach the end of the arm and see the glacier had been thwarted by a flotilla of icebergs at the 10 K range, the tides aren’t running in our favour this time either, but what the heck, and as I’m sure you know by now “God hates a coward”.

The anchor gets dropped in the little bay in the mouth of the arm. There are several boats here this time. A 45’ sailboat has tied to the trees along the shore and looks to be about 4’ away from the sheer rock edge. It is difficult to anchor with a combination of baby icebergs and boats all crowding for the limited space. This is quite a difference from the last time we visited, when we were the sole occupants in the cove. From my galley window I can see a little iceberg that’s attempting to rub shoulders with Audrey, it’s fairly small and is floating, so no worries. The little iceberg needs to worry; the Captain has decided that he wants to fill the ice coolers with berg ice. This ice is compressed, ancient and lasts way longer than any ice we can buy or make, it makes such a beautiful blue contrast against red crab.

We are a few days from Petersburg and will stock up on King crab when we get there. By stock up I mean we will eat all that we can and get a whole live one for the road. Any seafood if better when it’s fresh, so our philosophy is to catch it as we need it or flag down the commercial boats to see if they are able to sell or trade their catch. The prawn fishers seem to prefer swapping prawns for beer rather than cash. This barter system is often preferred, fresh bread goes almost as far as beer, but not quite.

Seafood is so delicate it takes no time before it acquires a freezer flavour that reduces it to mystery fish. Hmm are you sure that this is halibut, tastes like salt cod! How much do two people really need? I would like to come back tomorrow and still be able to get King crab. Leave the big guys for reproduction and throw the little guys back so they can grow up.

The little “berg” is roped to the side of the boat and the Captain hacks away at crystals of brilliant blue. He passes me one of the bigger chunks to feel, it is heavier than regular ice.

In the morning a huge cruise ship is leaving the Arm, we wait for the ice to quit moving from their wake before we head up the channel. The tide is returning so we are following the bergs into the Arm, we hope that we have enough time before the tide changes and we have to fight our way against the ice.

On a little rock ledge there is a momma bear with this years cubs hiding between her legs. It’s a straight drop into the ocean below if they slip. We are not sure of what she is trying to accomplish and she’s looking a little uncertain herself. Audrey slows down and we stay far enough away from her so we don’t add to the confusion.

With a roar a thirty-foot tour boat comes out of nowhere. The idiot pilot stops his boat right under the bears and cameras click like typewriters gone berserk…the poor bears scatter up the cliff, the babies are bawling in fear with the whites in their eyes showing in terror. They are slipping and falling, we fully expect to see one of them drop the 20 feet into the ocean. The Captain is furious, if we would have found anything on board to throw at this stupid tour operator it would have happened

The tour boat hits full throttle again and roars off around the corner, leaving the rest of us to deal with the ice banging against our hulls from the wake they’ve created. The bears shoot dirty looks over their shoulders as they top the 60-foot cliff; obviously they are glad to be done with all of us. I can see momma bear muttering, ”some people’s children, no manners at all!

Our necks are cramping from looking skyward up the straight flat rock that heads straight up to the sun and drops directly below the surface of the ocean. With the shear drop into the ocean the depth of the water allows for some unusual boating.   Waterfalls cascade down the rock all around us, spilling beautiful crystal clear glacier water into the sea.

The Captain brings Audrey’s bow toward the shoreline between two waterfalls. I am on the bow, not sure what he is doing. He slowly inches us forward until our bow is touching the sheer rock face between the two falls. This is so out of the realm of usual that my instincts are on full alert, “we’re too close to the rock, we’re too close to the rock.” What comes out my mouth is; “what in the hell are you doing?” He laughs, puts Audrey in neutral and throws me the water jug. “You’ve always wanted to take a shower under a waterfall” he says, “I expect by the time that the jug is only partially full, you will be soaking wet.”

I cannot back down because this is true, I do mange to fill the jug AND stay fairly dry. It’s an incredible feeling being underneath tons of falling water with mist blowing around you, I would love to do it again, in warmer water! This liquid ice will be great for drinking and it makes exceptional coffee.

Around the corner under full throttle cruises the “Empress of the North”. She’s a replica of an old riverboat complete with fake waterwheel. If you glitzed up the SS Klondike in Whitehorse, Yukon and she would be a smaller twin. Her hull is smashing through the ice and we wonder if she’s been re-enforced as an icebreaker. We have seen her several times before, her passengers always seem the happiest of the cruisers. They hang over the sides and wave and shout as they go by, lots of the other cruise ship passengers don’t respond to a friendly wave. Everyone is heading for the glacier.

A small thump resonates a vibration through the hull, then a bigger one and a bigger vibration. We are two kilometres from the glacier, but the tide has turned and now the icebergs are bumping against our hull, it is amazing how little “give” there is in a floating block of ice. I’d assumed that our bow wake would simply push the ice to the side, that isn’t what happens. The little ones will move, by little I mean no bigger than three feet in diameter, after that it’s like hitting a rock wall. Sitting still we can feel the ice hitting the hull, causing vibrations through Audrey’s bones, it’s time to back out of here. The ice is packing quickly so we do have to back up to get out of the icepack. Again, so close and yet so far, next time we’ll make it.

P.S. The Empress of the North has a record of running aground at least once a year. She ran aground again shortly after we saw her and was out of commission for the rest to the season. Whatever they are doing they seem to have the most fun while they are afloat.

The Empress of the North in Tracy Arm, Alaska