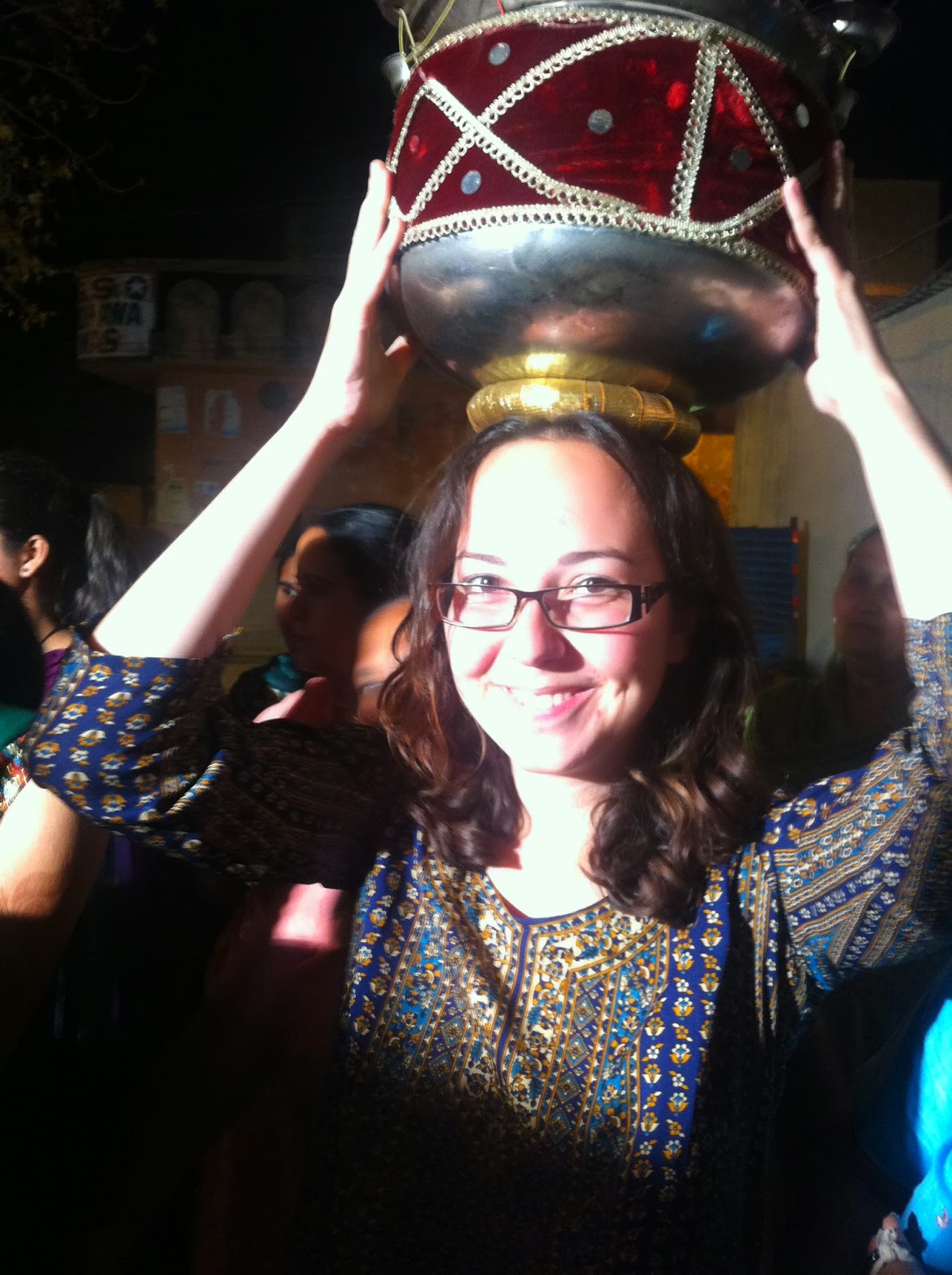 A True-Story By Alina Dragomir

(Publisher’s Note: Alina Dragomir is a friend of Gurdeep Pandher who lived in Punjab after her education in Montreal, Canada. In this article, she shares her experiences in Punjab)

I can’t believe I spent the first couple of months in relative fear of mingling more deeply with locals I met during my travels. Sure, there’s the occasional light conversation (“where you from, madam?”), and there was always enough mingling with local culture through CouchSurfing families. But India is one of those places where you can easily “couchsurf” minus the website, the real human way. Anyways, as I slowly started to experiment with this, I met many amazing people who shared so much with me over the following couple of months.

When I was on the train from Delhi to Amritsar, a lovely encounter had occurred, and although initially I was not intending on visiting Harvinder and her family, some chatting with other adventurous couchsurfers made me say “F it, I’m going off the beaten path for a while.” So I got a box of Punjabi sweets and called them up telling them I’m coming over. Their English was not so good, but we agreed that they would pick me up at the train station in Jalandhar, and I should just keep them posted on my arrival time. However, I had lost my phone as I left Amritsar, so I had to ask around on the train to use other people’s phones.

The train eventually reached Jalandhar and I was greeted by Harvinder’s husband who took me back to their place on his bike with all the bags. They lived in a quiet area with narrow winding streets, and I was thoroughly enjoying being off any Lonely Planet radar.

Meeting with her again was like meeting my mum after not seeing each other for a long time. She took me in her arms and treated me like family. Her entire family was incredibly sweet, even though her daughter (Simran), daughter-in-law, and husband were a bit more shy to attempt conversation with me. Simran spoke really good English, and so did Lovely, her son who recently got married. The five of them lived together, although there is one more son, Simar, who currently resides and works in Australia. They offered to host me for a bit even though they had a small place. I shared a bed with Harvinder and Simran (who would always steal the covers), and it somehow felt so familiar, safe and comfortable – I had no issues with any of it.

During the couple of days I spent at their place, I was recuperating from Amritsar and, feeling a little sick, I didn’t go out almost at all. They fed me delicious home-cooked Punjabi food (too generously), we talked, they taught me some more Hindi/Punjabi, they showed me photos and videos of Lovely’s wedding. And as if that wasn’t enough incredible hospitality already, they even got me a new pair of sandals after my chappals had been stolen at the Golden Temple! I was so moved and I didn’t know how to thank them or refuse or react. They helped me get a new phone as well, and gave me medication for my not-so-happy digestive system and foot rash.

Harvinder was working, so I spent some time alone at home with the girls, mostly in silence, with occasional giggles and smiles, and my trying to get them to share and eat with me, since they always brought me plates of goodies (as the saying goes in India: “Atithi devo bhava”, loosely meaning “the guest is God”). I got to try on the sari version of the clip-on tie (sooo much easier to put on than a regular sari!). I also got to use their internet to Skype with my mum in Canada. She and Harvinder got to see each other in the virtual world and talk a bit also. The conversation went something like this (imagine Harvinder with a thick, sweet Indian accent, and my mum with a just as heavy and lovely Eastern European accent):

Harvinder: “Namaste! How are you? I am here with Alina, your loving daughter!”

Harvinder: “Very good. We love your daughter very much. Don’t worry, we are taking good care of her now. She is safe and we love her very much.”

Mum: “Awww, thank you, you are very kind. I miss my daughter also.”

Harvinder: “She misses you too, and I will miss her too when she leaves. You should come visit our home also, with your daughter!”

Laughter ensued. Harvinder gave me a big hug, and my mum was a bit jealous.

Harvinder also Skyped with Simar, her son in Australia, and I was introduced to him. We ended up talking for quite a while and I’m looking forward to visiting him when I will travel there later on.

One pretty awesome thing that happened on my first night there was a wedding party in the streets! Before dinner, we heard some noise outside – drums and singing. And Harvinder called me to the door. There was a procession of people dancing, some musicians playing traditional songs, photographers and people with lights. She told me it was a tradition during the wedding ceremony. The person getting married goes from house to house with family and friends, and there’s dancing and customary rituals being played out. She then asked me if I wanted to go join for a bit. So, naturally, yeah of course!

We approached the crowd, and almost immediately a girl grabbed me by the wrist and pulled me in front of the lights where a few other girls were dancing. So I just joined in and tried to imitate their Punjabi dance moves (I already had some practise with the crowd at Wagah border). I was dressed in my usual hobo-indian-hippie-fusion style, and felt a little self-conscious among the ladies clad in fantastic and sparkly Punjabi suits, but still managed to abandon myself to the ceremony. It was just an incredible feeling to be a part of this. One of those “my own feet and brain have brought me here” happy moments. The women kept asking Harvinder who the white girl was, and when she told them how we met they were incredulous, and she would sometimes add “She is my Canadian daughter!”. But everyone was so friendly and welcoming and smiling.

They would pass around a sort of metal pot to put on the head and walk around with it for a few minutes before passing it on to someone else. I got to try it also. And one of the common traditions in North Indian weddings: twirling a 10 rupee bill around another person’s head (usually the one getting married), for good fortune. That gesture and custom always fascinated me. As I was dancing with the ladies, the older women would twirl the money around the younger girls’ heads (I’m guessing they were bachelorettes), and Harvinder did it to me as well. I almost melted from the sweetness of the gesture. It meant a lot to me coming from her. I also melt whenever someone does the hand-waving gesture that people do to beautiful young girls, to ward away evil. Harvinder also did it to me on my last night. It’s difficult to describe; something like an elegant hand wave with both hands around the girl’s temples. But I would often do it to the lovely ladies I met and it would make them giggle.

The ceremony proceeded to somebody’s house, Harvinder explained it was someone in the family. And they had to give us some treats and drinks. More dancing ensued, I was trying to get Harvinder to come dance with me. I can’t begin to describe how much appreciation I have for this woman I barely knew. Then the procession of people flooded the streets again and continued in this fashion. Harvinder, myself, and part of her family who joined us went back to the house to have dinner.

I would have stayed with the family longer, but I was still really yearning for the mountains and wanted to spend time there before leaving the country. On my last night before parting with Harvinder’s family, we had some incredible conversations about their life, the gurus they follow, the teachings they attended, and their general philosophy of life and God. One thing Harvinder had said among all the compassion and wisdom and incredible stories she had to share was “worship of God is worship of mankind”. And, again, as if it all wasn’t enough, she presented me with a Punjabi suit as a parting gift! I was afraid it would get ruined in my bag, but I ended up carrying it for a couple of weeks and using it at another wedding later on, before sending it back to Canada.

The next morning, as I was getting ready to leave, they were all pampering me; they gave me two locks for my bags and more medication. Harvinder was being sweetly overprotective, telling me not to talk to strangers or take food from anyone on trains. But considering how we met, it was still pretty funny to us. She told me to call her every day, or she would call me if I didn’t contact her for a while. Kept asking when I would be back, and to bring my mum too. I took down their address even though she kept insisting I shouldn’t send them anything.

I hugged the girls and hopped on the bike with her husband who would drive me to the bus station. From there I would take a bus to Palampur, near Dharamsala, to stay with my next CouchSurfing host (Mountains! Oh boy oh boy!). As I got on the bike and embraced Harvinder one last time, tears started streaming down her face. “I will miss you, my loving daughter, I love you!” “I will miss my Punjabi mama too!”. I was beyond speechless and so incredibly touched. She is one of the most loving and selfless people I have met in my life.

At the bus station, the husband bought me some bananas for the road, even though I was trying to refuse and pay them myself. We shook hands when I got on the bus, but I could see he was saddened as well.

They really were like family to me. And we talked almost every day after that. I called Harvinder for her birthday, sent postcards and photos, and occasionally I call from other countries now also. And it is always so uplifting to hear their voices. I would love to visit them again one day. I really only wish I could have given back as much generosity as they showed me! But it was time to pay it forward…in Himachal Pradesh.