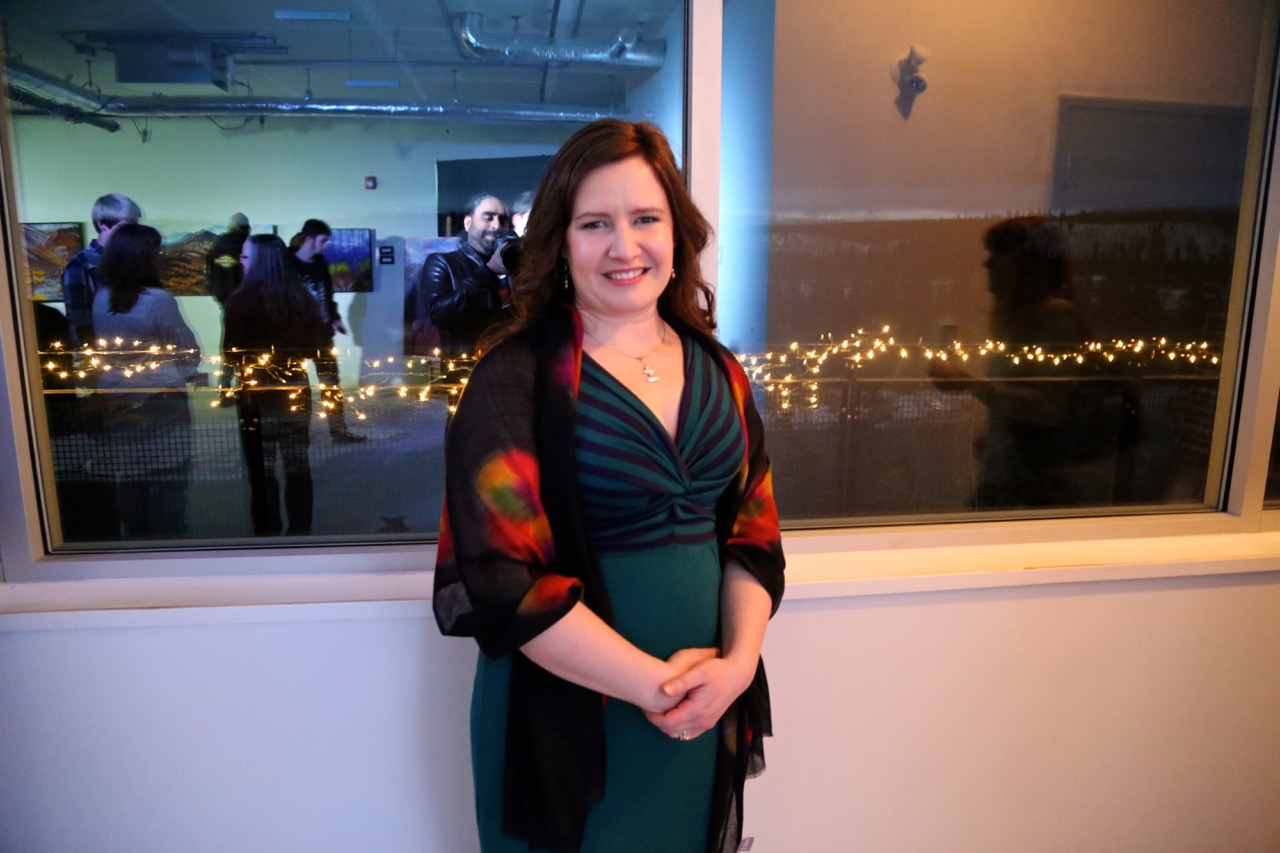 November 13, 2014 – Whitehorse based renowned painter organized an exhibition of her new work at the waterfront station in Whitehorse to celebrate 10 years of her painting career. She organized an event “My Best Work Yet” and over two hundred and fifty people visited very first day to take a glimpse of her work. She unveiled over a dozen new original oil paintings created in the studio over the last 12 months.

“We had a lot more visitors than we thought,” said Emma. “A lot of people have been watching me for ten years and so they got to see what ten years does to somebody that they support. I think everyone is pretty excited.”

While providing details about her show, Emma said, “It was a pop-up gallery in a location that nobody knew about and it was very kind of sneaky the way I did the advertising, I didn’t really do typical media release or posters or hand out invites, I used the guests list that I had developed over ten years. I invited four hundred people and two fifty came so that’s really good.”

The event was well organized. There were many things like live music, champagne, artist interview, photography, filming, etc. While talking to the Yukon Times, Emma explained scenes behind the scenes, “We just knew that we wanted to have an event that was done really nicely kind of like a business after hours but turning it in to the art scenes, like a patron appreciation and celebration of the ten year journey of an artist and then showing my best work and the most mature work that I have. Now we just decided to do so many things that were untraditional in terms of having an art show and we didn’t do it with the gallery we made our own gallery. We didn’t have any power or lights so we set up lights like we didn’t have. I don’t know we didn’t have the typical artist talk where the artist is standing behind the mike and we pulled Terry McCarthy and because she’s a friend and we did an interview and it was such a special event that I got my other friend Jessica Hall to film it all and I had another friend photograph everything properly.”

Emma described she had to rely on a huge amount of people, infrastructure, and volunteers. For her, it was also an emotional journey that also required a lot of patience.

“It was also bringing together a huge amount of working support and volunteers, and to make it like because it was a posh event you show up and you got champagne and you got some food and you got some wine, it cost a lot of money I mean, it was a blank space with nothing in it, not even any power outlets. Then I had to hire lights, I had to hire a van, I had to hire somebody for tables and drinks. I had to hire the alcohol it was just nuts but then we figured out a way to pay for the event because there was no guarantee ever that we’re going to sell any arts there never is, you don’t when it’s going to happen and it’s an emotional reaction,” she said.

Creating art involves money and there is no guarantee if the creator can recover his/her costs. Emma detailed her plans, “We designed it so that the workshop that I’m doing tomorrow and the next day would pay for the costs of the party if we had enough registration and then the back up plan as if we didn’t have enough registration that we would ask some sponsorship. We did all of that and we came in our budget as a cost neutral event so then in the fact that I did sell paintings that was all profit and I was actually get paid for once.”

Emma was very clear from a very young age that those were her linings were to the artistic side and primarily painting or drawing and creating from her hands. Once she was in grade school she was always stronger in Communication and Arts.

“I was a little bit okay with sports but not really like I wasn’t really that interested, I had to be really pushed into doing with the test program with cross-country skiing and stuff but then not helped me love the outdoors more and be able to live outdoors in all the different elements,” she said.

After graduating from Kootenay School of the Arts in Nelson, BC., Emma decided that she was going to start a studio practice and made a ten year plan. Her ten year plan included working in the arts field and did different art related jobs. She sold advertising, did graphic design, etc.

“I did that for the first five or seven years and then it was time like I had it was like one day I just couldn’t do my job at the newspaper anymore, I was just like into it I was into like I got to start this business.” Emma recalled her those days.

“Five years ago I work full time and I launched Emma Barr Fine Art and Design and I did a lot of design works still within my studio.”

Thursday was first day of four days events with a 10th year anniversary party. There was school group and other public visits on Friday and workshops about colour theory and planning and executing a landscape painting on site Saturday and Sunday.