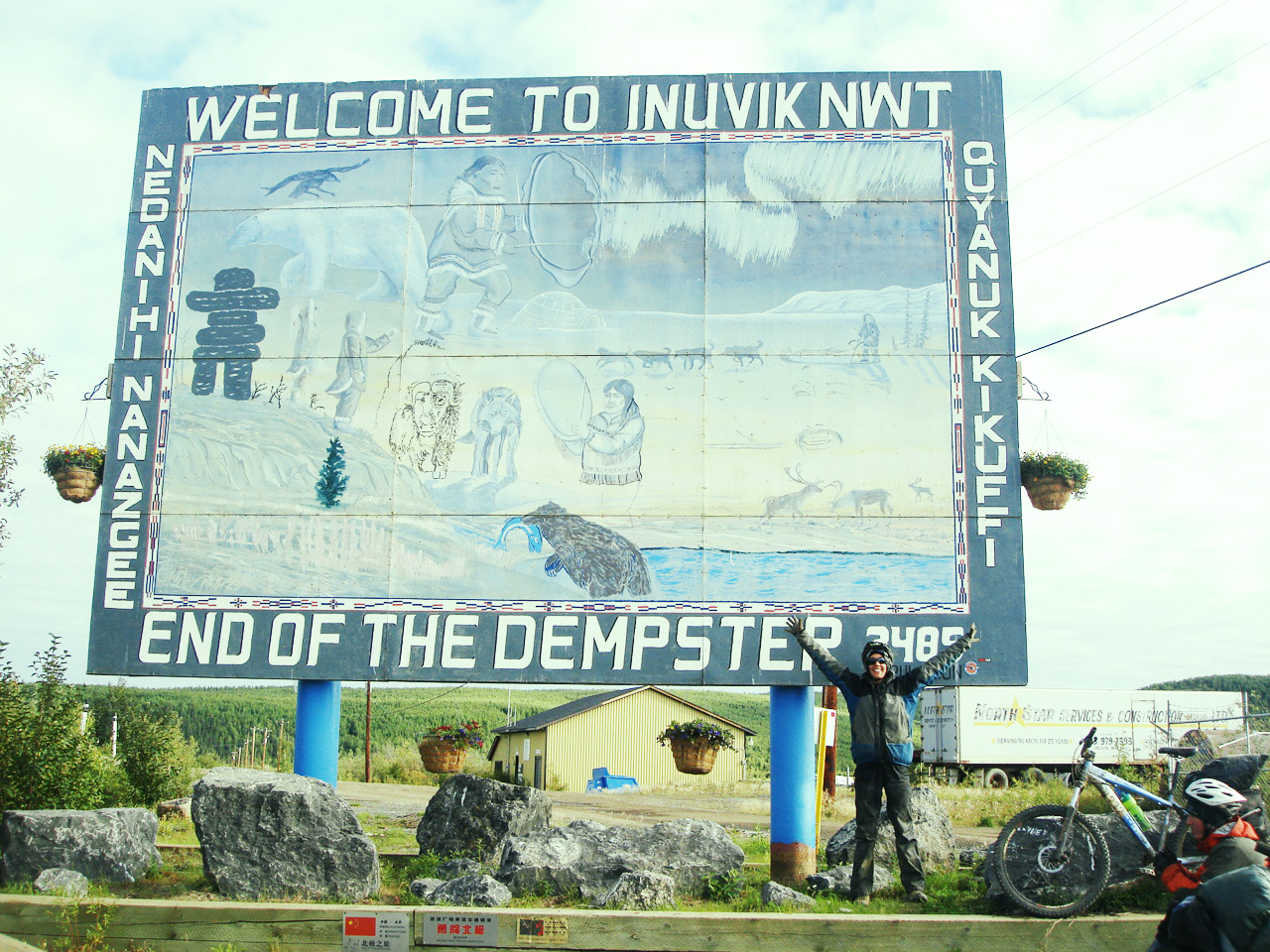 It’s lunch time. I’m alone, in a spectacular land with twice as many moose as people. My only companion is Skookum – my mountain bike. The nearest settlement is three days of biking away down the Dempster Highway. Suddenly, a flash of fur in the bushes interrupts my tranquil munching. “A lynx!” I think as I stand and grab my camera. What I see then stops my heart in mid-beat. It’s no lynx. It’s a giant grizzly. And it’s lumbering directly towards me, nonchalant, ignoring my yells, unaware of my bear spray. I have two options. I can keep yelling until the massive beast is within range of my puny can of spray. Or I can retreat, allowing it to hop onto the picnic table and chow down on the irreplaceable food intended to get me through ten days of biking through the Yukon wilderness. No time for thinking. I choose potential starvation over immediate mauling. And flee. This is going to put a serious spoke in my wheel. How do I get out of this dilemma? How did I get into it!? And why?

This past August, I began a typical day in my role as Recreation Director in Pelly Crossing, Yukon. This is the home of the Selkirk First Nation. The challenges for this community are as vast as the size of the territory: the tragedies experienced in residential schools, including severe physical, emotional and sexual abuse have left them with intergenerational cycles of trauma and ensuing social woes. Living and working here is extremely challenging and emotionally draining, so when three cyclists passing through jokingly invited me to join them on their quest from Vancouver to the Arctic, I said what only someone who’s gone loopy from the midnight sun would say: “Absolutely!”

The mere mention of the name “Dempster Highway” strikes terror into the hearts of rational cycle tourists. The Dempster is the most northern road in Canada. It is an isolated 750 kilometre stretch of dirt (or impassable mud depending on the weather) with no services, travelling from Dawson City in the Yukon to Inuvik, Northwest Territories. Heading north on the Klondike highway five hundred kilometres south of the Dempster, there is a sign warning you that you are leaving the area covered by emergency services. It is not uncommon to have hundred kilometre per hour winds blowing across the Arctic tundra, and snow even in the middle of summer. The weather can change overnight from 35 degrees Celsius to freezing. Grizzlies roam the entire stretch on the hunt either for caribou or for the weeks of food rations in the panniers of crazy cyclists, if not the cyclists themselves! Even displaced polar bears lacking ice have been found strolling down the Dempster.

I immediately drove three hours south to Whitehorse to get geared up in a mad rush. My friends there reasoned I had gone nuts – us Yukoners have been on the Dempster in vehicles, and it is common to bring at least three spare tires and multiple jerry cans. While most people who bike the Dempster, having never been there, have the benefit (or misfortune) of being able to lead themselves into false hope that the local stories are not true, I fully knew what to expect. This trio comprised of an 18-year-old bike mechanic, a 19-year-old ultra-marathoner, and the 21-year-old leader who cycled coast to coast across Canada. To make things more terrifying, I had no idea if I could keep up with the team that called themselves GrassRoutes, having suffered a nasty accident three years ago that left me with chronic pain. Additionally, the weather was calling for blowing rain and snow for most of the ten day expedition. The Dempster, I knew, was going to be hell on wheels to tackle!

So, why on Earth, you wonder? GrassRoutes is a youth organization that embarks on extended bike trips for the personal growth that immense challenges provide, while delivering workshops for kids along the way on human-caused environmental issues. They also fundraise for youth bike co-ops and create video documentaries to use in future workshops. Their Journey to the Midnight Sun focused on issues of global warming as observed migrating from south to north and how the regions impact one another. This was a journey of learning and educating about the unsustainable things we are doing – why on Earth, our only home, indeed.

On day one of the trip, although my teammates were mostly just three specs on the horizon ahead, the weather was great, the scenery spectacular. I ignored the searing pain in my back and my chafed crotch, convincing myself that it was simply due to my sedentary office job and that I’d probably build up scar tissue or something. If this was as bad as it got, bring it on, Dempster!

Then, an event unfolded that made my stomach turn over. As if in slow motion, Graham, our team leader, turned right over his handlebars, metal and flesh colliding with the road in spectacular fashion. Gavin, who had caused the crash by suddenly cutting Graham off, guiltily ran to Graham’s aid. For me, it was like watching a video of myself being hit three years earlier, flying over Skookum and smashing the pavement. Flashbacks to that horrific moment when my passions, career choices, even social circles and whole identity slipped away made my head spin. Shaken, I had no choice but to keep on spinning and ride it out. Fortunately Graham only suffered minor wounds. Just minutes from our destination, Saskia also bailed off of her bike as her tire went “pop!” Right, three spare tires, eh Dempster? Would it be my turn next? I firmly decided I had already had my turn to bail, and this was going to be a great journey. Dempster, bring it on!

Day two. I watched some graduate students from Ottawa who were in the field for a month studying the shrinking layer of permafrost. I biked alone that day, having caught a ride with a Pennsylvanian environmental geography professor to the northern border of Tombstone Territorial Park. I took this head start with the majority of the team’s weight. I opted to do this to help the team make a very long day possible in order to reach a camp with bear caches, as the trees up north are too small to hang food high enough. Ironically, this is when I encountered my large furry friend.

Interestingly, I was not as afraid of this situation as I am of biking in a city of traffic. Sometimes our perceived versus actual risk are two very different things, and I believe driving a car is more dangerous than this grizzly was. Similarly, throughout our workshops we found that compared to people up north, southerners from cities did not perceive climate change to be as serious. Even though they understood more of the science, they perhaps do not have the same level of personal connection to nature. Mind you, climate change is happening twice as fast in the Arctic, but northerners even noticed such details as a new insect encroaching upon previously inhospitable territory. In January, we had unusual rain which created a layer of ice that cut up moose’s legs so badly that they were unable to escape wolves. In Pelly we had a plight of aspen tortrix worms that would normally be unable to survive if winters are cold enough. Not only did it look like the Apocalypse having to walk through thousands of suspended worms, but after mummifying entire trees in webs they also ate the moist leaves, worsening forest fires from the unusually intense lightning storms. In Inuvik, people’s houses fell over due to the melting permafrost.

On the rest of the journey we continued to encounter challenges. Like the elder back in Pelly that kept unravelling my imperfect moccasin beadwork, we kept unravelling our hard work up mountains. I held my face against relentless wind and rain on the downs. We had to keep spirits high and get along, relying on each other for survival. For a two day stretch, we had to carry all of the water we would need. We were stuck for a day on the several inches of mud that the road had become in a blizzard, already short on bear-slobber-free food. Even the road maintenance crew could not navigate their trucks through the mud. After entering the Mackenzie Delta, Canada’s largest river, it became a mental game as we biked in a straight flat line past miniature trees for three days with the sun going around in circles. By that point, the mud had destroyed my brakes and shifters, and I started calling the road the “Dumpster”!
Once in Inuvik, we faced different challenges – hardly as scary as an 800-pound grizzly, but daunting in their own way. We delivered workshops, did radio interviews, toured the Aurora College and Research Centre to learn about their renewable energy research (wind power doesn’t work yet as their turbine fell over due to the shifting permafrost) and changing migratory bird nesting grounds. We met with Floyd Roland, Inuvialuit mayor of Inuvik and former premier of NWT. As a native to this area, he grew up living off the land and realizes the importance of finding sustainable lifestyles in this fragile ecosystem rather than exploiting the finite natural resources that they have, but he is also challenged by the desire to keep his young people on their homeland to preserve their traditional ways and culture. That is only possible if there are enough jobs for them. Currently a topic of debate is the year-round road to Tuktoyaktuk project and the ensuing natural gas extraction destined for pipeline export to northern Alberta, ultimately for use in extracting Tar Sands bitumen. As it turns out, like most mining in the Yukon, workers are often not local but rather outsiders that work several weeks at a time before leaving with their earnings, as there may not be enough qualified locals to do the jobs.

On the flight back to Dawson, I marvelled at the spectacular land below and my newly formed deeper connection to it. Our Yukon truly is the Last Frontier, something that is worth more than words can describe. It was strangely disconcerting to watch it all go by in a mere two hours, after ten days of harsh struggles. In our comfortable modern life, people are becoming less attached to nature, which itself takes its toll on human health. My struggles on the Dempster were unquestionably worth it. Becoming intimately connected with such pristine wilderness that most do not get to experience in their lifetimes is a truly rewarding experience, and one that I hope more city dwellers have before they unsustainably exploit what is there in the name of economy, completely unaware of how much more there is to be lost.

Oh yes, the grizzly… although the beast had good taste and ate our favourites, eventually a car came by and I got the driver to keep the bear at bay with fervent honking while I rescued my food. Supplemented with the plentiful berries around, we made it safely to the Land of the Midnight Sun!