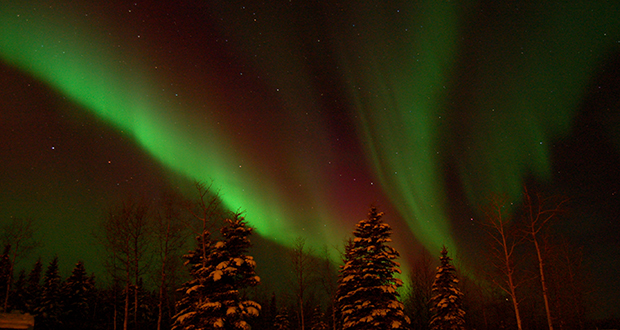 YOU only need to set foot in the Yukon for a split second before it becomes clear why the territory’s motto is “Larger Than Life.”

Home to 14 First Nations groups and some 30,000 people — as well as the backdrop of Canada’s highest mountain and some of the largest and most isolated National Parks — the Yukon is one of the least densely populated places left on earth.

Imagine taking one tenth the population of Victoria and spreading it out over an area that is geographically larger than California, and is unadulterated and pristine wilderness.

Most of the population resides in the territory’s capital of Whitehorse. I, on the other hand, live in a self-governed Northern Tutchone First Nation community of 300, several hours north of Whitehorse. Of the seven billion people living on our planet, only about four million of them can claim that they live further north than we do here.

I am a graduate from SFU’s Kinesiology program, and the Recreation Director for the community of Pelly Crossing, which is located in the traditional territory that the Selkirk First Nation has been inhabiting for many thousands of years, passing on knowledge of survival in the below 50 Celsius winters from one generation to the next.

In my time here, I’ve had many larger-than-life experiences, and have also faced the sharp paradoxes of the Yukon: there is a contrast between the awe-inspiring experiences that teach you how tiny yet connected to everything you are, and the harsh reality of life in the north.

One of the most amazing northern experiences has been to watch the aurora borealis dancing overhead in electric purples and greens as the particles from the sun interact with the oxygen and nitrogen in our atmosphere, respectively.

One particular November night, it was nearly -50 Celsius. I ran out with two of my friends to watch a huge swan dance into a soaring eagle, a daffodil and finally an angel that raced across the star-filled sky — a sky that was so clear by now that I spotted the Andromeda galaxy, 2.5 million light years away. By contrast, in the summer, it’s chilling to lie in the sunlit tent nestled in the jagged mountains at two in the morning, listening to the eerie call of the wolves. The ground cover consists of strawberries, cranberries, raspberries, blueberries, and more. By autumn the hills are on fire with the changing leaves, as hundreds of thousands of cranes, swans, geese, and other birds migrate south. I saw bears, lynx, foxes, porcupines, Dall sheep, wolves, moose and elk.

Yet even with more beauty than imaginable, the people here have suffered greatly. From the sudden colonization that occurred after the Klondike Gold Rush, to the end of the steamboat days when the Klondike highway was built, which forced Selkirk people to relocate, to the despicable residential school era that forced children away from their hunting gathering culture, westernized them and spat them back to families they could no longer understand, there is a lot of trauma left in our community.

It is a generational cycle, one lacking parenting as a result of being taken from their own families; there is a generational gap: the elders living here grew up living off the land, and their grandchildren grew up playing video games. It is a suppression of their language, traditions, and culture, and it is a cycle of substance abuse that leads to many more downward spirals.

There is no purpose in sugar-coating it. Children steal money off their parents in order to feed their drug habit — after all, their parents are attempting the same thing, sometimes stealing off their children who work part-time student jobs.

Being part of the Yukon EMS ambulance team, I know that over 50 per cent of our calls are alcohol related. Beginning in February, it is the sunniest place in the country, but don’t let it fool you. There have been several instances this year of teenagers that have passed out drunk and froze to death in the -40 temperatures.

Even if sober it can be a dangerous place. If your car breaks down on an isolated strip of highway, it could be an extremely long and dangerously cold wait, as there is no cell reception. Although difficult to deal with, these issues and history make the discrimination against me — as one of the only “white” people here — more understandable.

I have a friend here who was violently raped as a teenager. She got pregnant, and alcohol and drugs were the only method to temporarily wipe out her horrifying experience, so her child was born with severe fetal alcohol spectrum disorder. This substance abuse however, increased her vulnerability to being raped again.

Eventually, two kids later, she found herself lying in the street close to death. She finally called for help and was flown to Vancouver, where a specialized surgeon reconstructed her slashed wrists. Relocated from her home and with no money or support system, she had nowhere to go. She ended up like many of the people in Vancouver’s downtown eastside.

How many of us look from the bus window at that corner and judge the people there for “wasting their lives?” How many of us ignorantly tell kids ogling from the car that that’s where they’ll end up if they make stupid choices? In the best case scenario, we simply don’t give them much thought.

My friend was one of those people — the ones standing on the corner, serving as a lesson of deterrence to children, on the receiving end of our pity. Today, she is one of the most inspiring “Larger Than Life” characters I have ever met: hardworking, outgoing, and humorous, she is not afraid to share her story.

Sometimes the incredible beauty surrounding us brings even more pain as we try to comprehend the horrors that occurred in such a pristine place; likewise, it is difficult to comprehend how a simple mistake, such as forgetting your lock antifreeze inside in the dead of winter, could lead to death by such an aesthetic place.

But the things that bring healing to the community are activities that restore their culture and focus on nature.

One successful program was a native dancing program for school kids. When the children performed for their elders, the community was transformed. Tears of joy, pain and healing flowed down the faces of elders as they got up from the audience and danced with their youth, bridging that generational gap to finally connect with them.

The stone-faced youth that were so preoccupied with finding their next joint became energetic with smiles after only three days in the wilderness, where they were learning to ice fish, make fire, shoot arrows, make snares and listen to traditional legends.

It will take time — it may take a few more generations — but if any people can overcome such struggles, the Larger Than Life community of Selkirk people will.

These are the people most connected to the land, and they instinctively realize what an integral role it plays in the physical, mental and spiritual well-being of a person. If we are to deal with all of the contemporary issues we’re faced with, we need to listen to the lessons of their stories and culture.

One thing I know for certain is that if there is any place on earth that is larger than life, in both the natural environment and in the character of its inhabitants, it most certainly is the Yukon.

Words and pictures by Melanie Hackett

(Melanie Hackett was recreation director for Selkirk First Nation. She lived in Pelly Crossing for more than a year.)