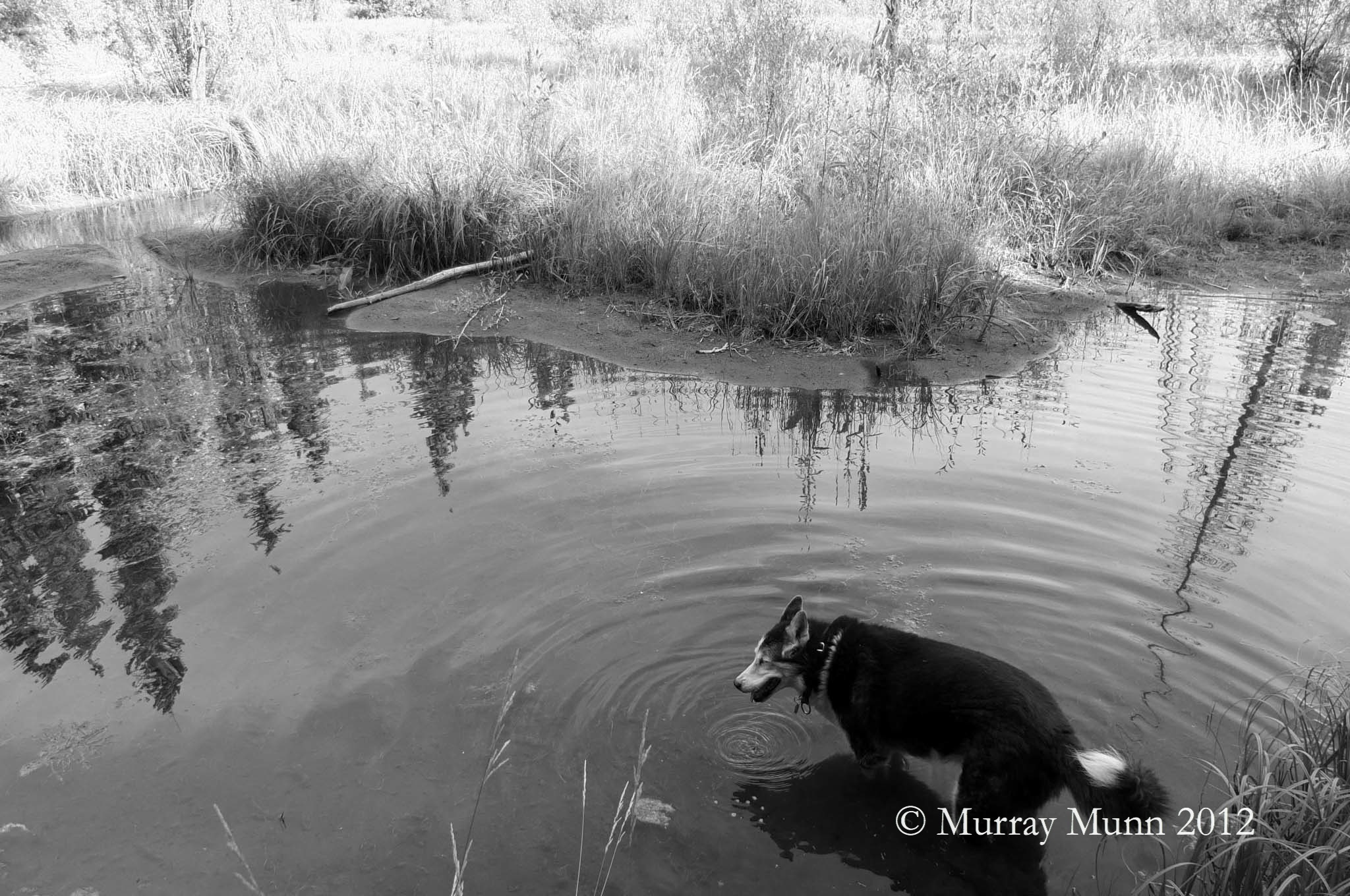 Text and photographs by: Murray Munn
(Part 2 of 4)

On the experts’ side of the story, one person—a retired biologist who admitted he had no time whatsoever for beavers (he’d once shot them at Wolf Creek, turning those waters roiling red)—pointed out that when one saw dead mature spruce, one knew that there had once been nice dry land in which the spruce could grow, but that beavers had made a pond that killed the spruce. And what was his point? He also wondered aloud, and without irony, if the beaver dam might not have been taken down by kids “looking for another place to play with their machines.” Thankfully, this has not happened, though I have seen people parked in the marsh sitting on their machines chatting.

As for the dead spruce … probably true, though I have thought black spruce did tend to grow in semi-wet areas more than some other species. Was this a bad thing, these disappointed spruce? Were beavers evil for drowning them? No more than secession is evil in arboriculture…first come birch and poplar and the understory, and eventually the prime species take over—the longer-growing pine and spruce, in the Yukon. One doesn’t see folks getting incensed by the spruce, and chopping them down. (Well, they do chop down the spruce, but not from ire. Humans love spruce … for their log piles.)

I e-mailed another recommended expert in a government department, and she phoned me back a week later, giving me a succinct few minutes of what she knew. When I asked if relocation of the doomed beaver had been considered, she replied, after a micro-pause, “To where?” I had to admit, I had no idea. We who live in the city like to think that there are endless unused ponds and lakes “out there,” but in fact if there’s a life-supporting pond, it’s all but guaranteed to harbour its full share of life. If it can support a beaver, it likely already does. If it can support five or 11, ditto. To drop a beaver into an inhabited pond is, perhaps, to do no one any favours. Whether it would get mauled by the current residents, or forced overland, I cannot say. Nature abhors a vacuum … and a full dustbag.

A case in point is the solo beaver that in the spring of 2010 moved into Long Lake (and I see in August 2014 that another beaver appears to be trying this, again). I have walked around that perfect-sized pond since 2001 or so, and I can say for certain that this was the first beaver to have tried Long Lake in that decade. Old chewed stumps attest to others having given it a go in previous times. That 2010 beaver is not there now. It lasted the one summer, maybe some of the fall. Maybe it managed to overwinter. There have been no cuttings this year, nor last. I’d like to know if it was the overabundance of dogs and their pet humans (cutting down on its ability to find and collect food and repair its lodge) that caused it to give up, or a lack of food, or a lack of a mate? Could it be that the ice freezes so low that there isn’t enough water—that the pond is too shallow, in other words?   No dug-up lodge or bits of fur (a bear or wolverine would have smelled the corpse) suggest the beaver got lonesome, and left, no doubt tremblingly humping it overland to the Yukon River in search of greener pastures. But I digress …

Back to the College area. As with Long Lake, I have walked these trails roughly since 2001 or 2002, when I first acquired my first dog. So, about a decade of experience with the College trails, always in the noon time zone.

So I have mostly impressions and hearsay, so far. The walking woman thought or knew that beavers had been trapped in an aqueous trap, plus one otter. I had no proof. I had neglected to ask her how she knew, not yet knowing I’d be working on this story. I didn’t often see beavers at either pond, myself.   Usually I’d hear their warning slap-and-splash, out of sight at the upper pond. The upper pond doesn’t offer much of a sightline, and the lower one…well, I guess they only came out at night, and I was always there at noon. Possibly I never saw one there … I believe I did, but can’t be sure. So I can’t say I knew for sure both ponds had beavers during my decade walking around them, which is generally around noon.

But the folks who called me or e-mailed assured me they had seen them, and regularly. They missed the ‘vee’ of the beavers’ path on the water, and the inevitable abundance their deeper, fuller ponds brought. Life abounded. The kingfishers are still there on occasion, but they do seem much more rare. The red-winged blackbird I heard and saw by its nest the past few years was not there in 2012. The eagles are still around both ponds, anecdotally more the upper (deeper) one; I wonder what their success rate is compared with other years? As with kingfishers, it must be easier to espy the fish in the lower pond now.

I have contacted the Yukon Fish & Game Association. I have contacted various people who worked for various government departments—conservation officers at Yukon Renewable Resources, people working for Highways. College professors (of related studies) contacted me with their knowledge or their impressions (one felt that there hadn’t been a functioning beaver dam at the pumphouse pond in 14 years, plus or minus, but I’ve only walked there a decade and I’m pretty sure there has been upkeep in that time by beavers…but the folks who contacted me by phone and e-mail are sure of it, and not more than a year or two previous to 2012. (The northern lodge near the dam does seem pretty old and disused—one person said 5 years since—but I’m told the more central lodge in the lower pond was the last one used, and may have been where the beavers were drowned.). I’m assured by the College instructor that the water quality of both ponds is very good, that invertebrates are alive and well, and that, since certain types that are present are quite intolerant of pollution, it’s a healthy ecosystem.