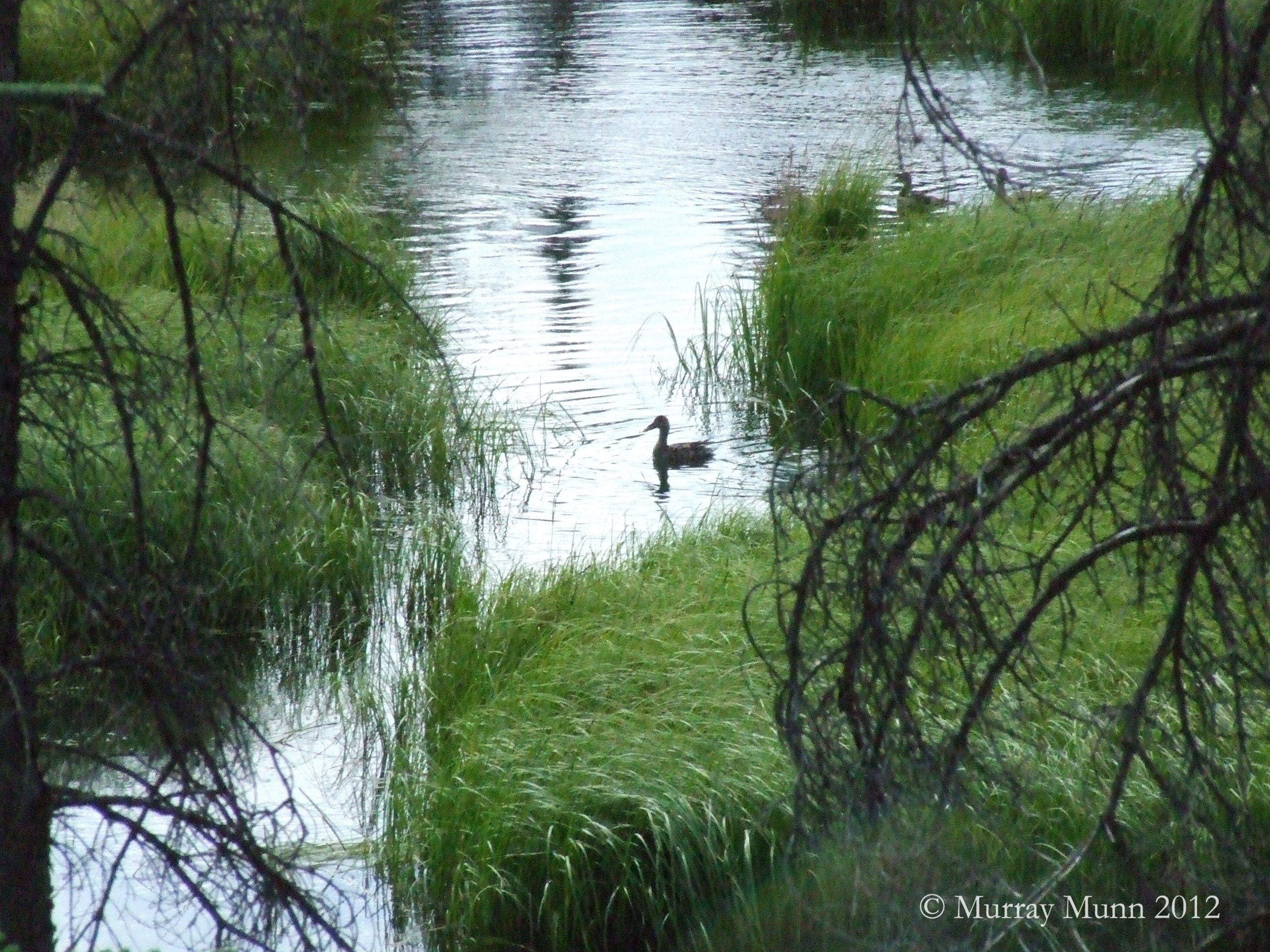 One respondent walked the entire length of McIntyre Creek—the creek that feeds the two ponds—and counted zero chinook salmon this year, and has found salmon other years.  (I didn’t know salmon could be counted that way, that they could be discerned with any counting certainty in a fast-running creek with overhang and deadfall, but that’s another new thing to me.)  I learned that McIntyre Creek as we know it was not always thus, that its course has been modified over the century to a significant, if imperfectly understood, degree.  Whitehorse Copper and other developments had creek crossings, and the Dawson (and/or Kluane) Trail crossed it at points unknown.  McIntyre Creek, as a 1997 document by Al von Finster explained, once wended a quite different way than it winds today … and a bit more complicatedly than needs to be mapped out here.  We truly are busy beavers, we humans.

It should have been no surprise, but I have learned that, yes, beaver are trapped annually in the McIntyre Creek area and anywhere else where they tamper with man-made structures.  District Conservation Officer David Bakica told me that most years an average of 2 beaver are trapped in the area, with a high of 11 one year.  The trapping is done by a registered trapper using a Conibear C330, and set in water where it is unlikely a wandering dog will get caught in it; however, it may happen that due to fluctuations in water level, the trap may not remain entirely submerged.  The permit is only for the beaver, and does not allow for the destruction of dams per se, except as needed to set and hold the trap.  If a dam or other blockage made by beavers needs to be destroyed, the conservation officers do that.

The drowned otter, presumably “collateral damage,” was not referenced by the c.o., but I did hear of it from two different people—a walker who must know someone who knew, and a Highways rep who believed it to be true, but told me to ask another person, which I did and whose answer is detailed herein.  It’s probably no surprise that bycatch does happen.  Both otter and beaver mate for the long-term, but if a mate is lost, they do seek out a new mate.  New mates notwithstanding, death by drowning is not a pleasant result.

As for the reason for the trapping, c.o. Bakica said his database, which he admitted had some gaps and wasn’t waterproof, showed only “protection of infrastructure” as the reason for trapping.  The nearby Alaska Highway bed was one such—the water of a dammed pond can dissolve and erode the roadbed and, left undetected, imperil drivers—and, much further upstream at the Yukon Electric structures just beyond Icy Waters, beaver workings in the dams and penstocks were another.

During my 1979-‘80 stint in Whitehorse, fresh up from Regina, when I got the meter reader job that all the “bush hippies” had tried for (a quote from someone I worked with there back then), I read the meters in the entire Whitehorse region, and I ought to have thought of the Yukon Electrical hydro stations upstream (where I and my company Datsun made the trip once per month to read the meter), but it wasn’t until a helpful e-mail came that I twigged that power demands were the likely reason for the low water in the pumphouse pond.   However, two calls to Yukon Electrical found the communications person busy, and no message left, so I cannot confirm that waters were withheld due to power demands in the spring and summer of 2012.  It does seem the most plausible reason for the low water, and it is probably within their rights.

There were some beavers killed in 2011/‘12 but I was unable to get the numbers.  I still don’t know if the beavers’ absence is the root of the low water, or part of the reason.  The apparent return to full flow of the creek above the pond (between the upper and lower ponds) last weekend makes me think it had little to do with the beaver being killed.  It’s not that the dam is leaking, in other words, though it is.  It could be the beaver in the upper pond (again, not sure if they are still living there) have sequestered most of the flow.  (There are presently 2 dams at the exit from the upper pond—the main one, and a sub-dam that creates a nice little step-pond (photo included).  I still can’t understand why the upper pond is deep, the pumphouse pond (was) shallow, and I am not clear where the beavers were taken out.  Which pond held the beaver that were trapped, or was it both?  The lower pond surely cannot have an effect on the roadbed of the highway—it’s got to be 10 or 30 meters below highway level, and a kilometre or two distant—but perhaps beaver travel back and forth between ponds, so to kill a lower pond beaver is to kill both ponds’ beaver?

Speaking of travel, another of the reasons I’d conjectured for the need to eliminate dams (and, thus, beavers) was the passage of salmon for spawning.  I did see the entire carcass of a spent salmon two summers ago caught up in the detritus of the creek some 20 metres beyond the inner-forest footbridge (the one that is now impassable to ATVs and snowmachines), but have no idea if they can jump or wriggle over these impediments. Would the powers that be have taken out a dam for the sake of salmon?  Perhaps.  It just usually is human interests that garner the interest of wildlife managers—well, we do like our fish, so that is a possibility.

The least likely reason I came up with was that a new subdivision was being planned in the area near the highway and the “upper pond.”  I based this on nothing but the existence of stakes this fall in the College area.  I witnessed the tools of a two-man crew in the summer of 2012 by the cement-and-beam barrier not far north of the pumphouse pond, mapping the footpaths … for all I could tell (the men themselves were not there—possibly of on a break?).  That is, maybe there is no housing being planned, and they are making a map of trails.