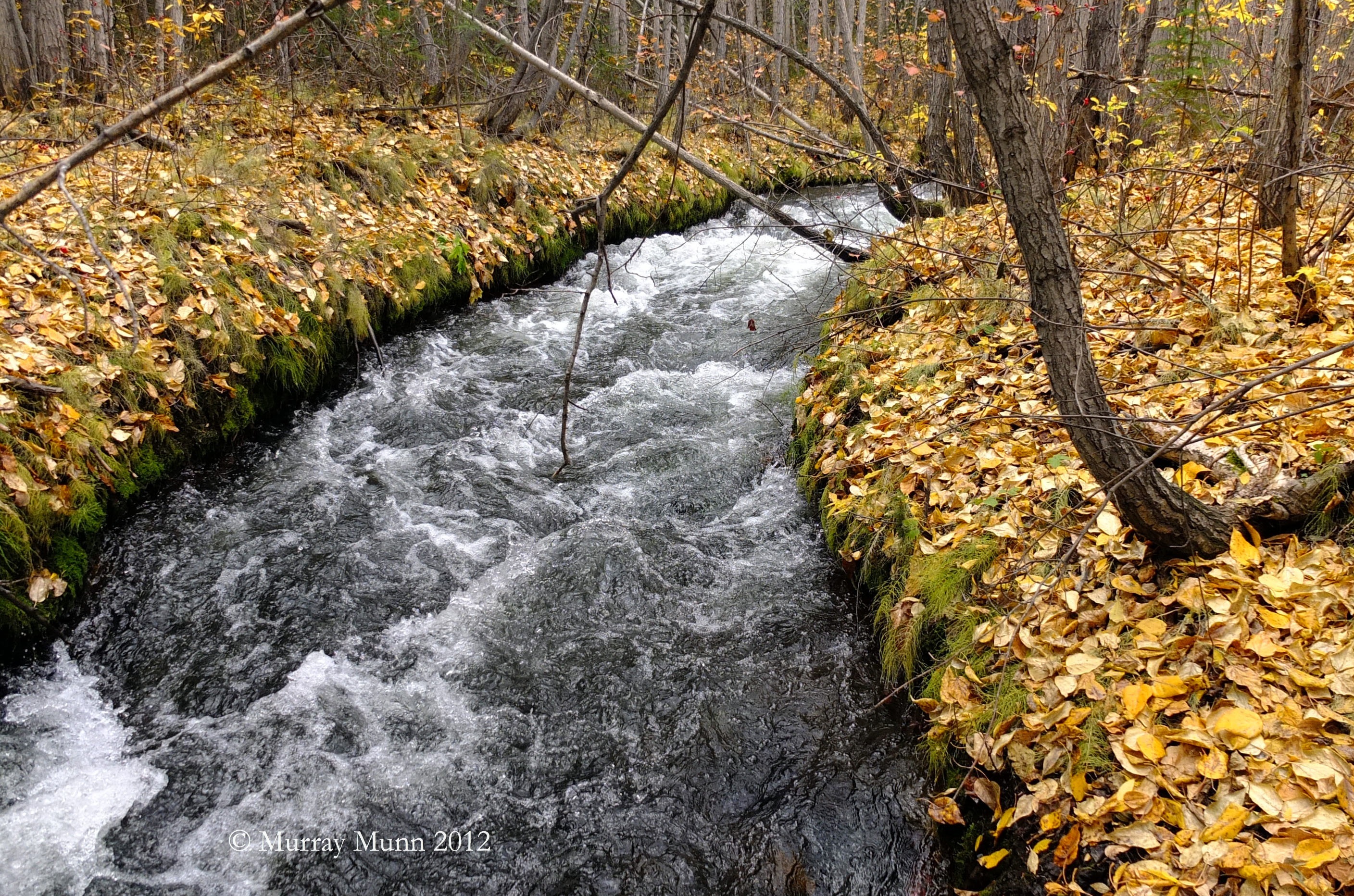 Text and photographs by: Murray Munn
(Part 3 of 4)

But why would the existence of a pond be a detriment to a housing development?  I hoped a subdivision was not planned, not after Whistle Bend has gone through and taken out so much productive land, but I could only see detriment on the side of the wildlife; surely a pond would be an asset to humans, and an otter disaster for beaver and the songbirds and ducks, foxes and eagles it would impact.  (Although there are stories told by such truth-tellers as the great nature-writer Andy Russell of determined dogs’ bellies being ripped open by beavers as they chased pokily after the expertly swimming big rodents.)

All that summer and fall, I had noticed flagging tape, surveyors’ sticks and machete-slashed trees in the College pond area—near the highway and north of the upper pond, as well as further in toward the footbridge—and at first thought it might be a Yukon College class learning the trade.  But now I am sure the area was being staked and surveyed—for what, I don’t know.  Still, I don’t think a new subdivision would be a reason for which beavers would be dispatched.

My best guess as to lower water levels in the so-called “pumphouse pond” is that Yukon Electrical needed to trap more water in its upper creek penstocks—up toward Mount Mac and Fish Lake—and that is why the pumphouse pond was very low.  I don’t know if duck broods were lost, let alone what other effects there may be when water is held back (does the pond have crustaceans?  frogs?  muskrats?), but I do have photographs showing larger numbers and greater varieties of ducks in other years.  As I stated, I believe I saw some canvasbacks in there a few years back, but could not determine what they were with certainty.  There seemed to be more swallows, more songbirds (I’ve seen yellow warblers, myrtle warblers (I prefer the old name), common yellowthroats, and I’ve heard American tree sparrows, ruby-crowned kinglets and many other birds that I couldn’t see, let alone photograph).  There was, or seemed to be, more of everything in other years.  But it’s just an impression with unknowable numbers to back it up.

This piece has been my attempt to discover what happens behind anecdotal, impressionistic events at a popular recreational area.  And at a would-be popular wildlife corridor.  Was the water lower in the summer of 2012 than in previous times?  There’s no doubt of that, in my mind.  It seems to be back “up” now.  Were the stories true of beaver being trapped, and of the incidental otter?  Most definitely … and the otter, allegedly, but quite likely.  (I’m told that otter have been known to prey on beaver—presumably the smaller ones—so if there are remaining beaver in these ponds, I’d guess they are pleased.)  We just never see this side of the College pond area; for obvious reasons it’s not broadcast.  I wanted to find out.

Are “experts” helping to advise when water should be held back, and when not?  Is YECL required to seek advice, or to heed it?  Was the water held back by YECL this summer?  I think also that we forfeit a lot of power to scientists, or rather that even science is very much subject to the inclinations and interests of its purveyors and their bosses as any other area of study.  (It was I, not the scientists I then worked amid, who wondered aloud, on hearing the explosions that were making a pathway that was to become the Hamilton Boulevard extension, if then-hibernating ground squirrels would wake up concussed come spring.)  Non-experts have knowledge as well, and may have more experience in an area than the scientists and technicians in charge, if only anecdotal.  Scientists are as apt to ride ATVs through the mossy woods as the uneducated, in my experience, to hunt with machine assistance as those who never went past Grade 6, or to not see environmental decay that their employers don’t pay them to see.  Perhaps we need to reap the knowledge of other interested parties—the walkers and the amateur birders, etc.—before taking decisions.  And maybe agreements made with community involvement need to be adhered to.

People are upset about the loss of wildlife and woods in the City.  Things happen and, after a few months of no beaver sign, people sense or see the evidence of events they had no control over or input into.  They feel offended they were not informed or consulted.  True, it’d be an onerous process if every decision involved canvassing all interested parties … On the other hand, a citizen-journalist will bring it to the public’s attention, as I am doing with this admittedly ponderous article.

As for the yowling, shrieking night sounds that one caller told me of hearing somewhere around 1989 in the area of the upper pond?  It may have been a battle of the beaver, as they surmised, but romance—sex—seems the likelier basis.

My thanks to all those who phoned or e-mailed, and especially to those who answered my numerous and confused questions.  Any holes in this dam, any breaches in journalistic procedure, are the fault of the writer.  (But there are so many little sticks…!)