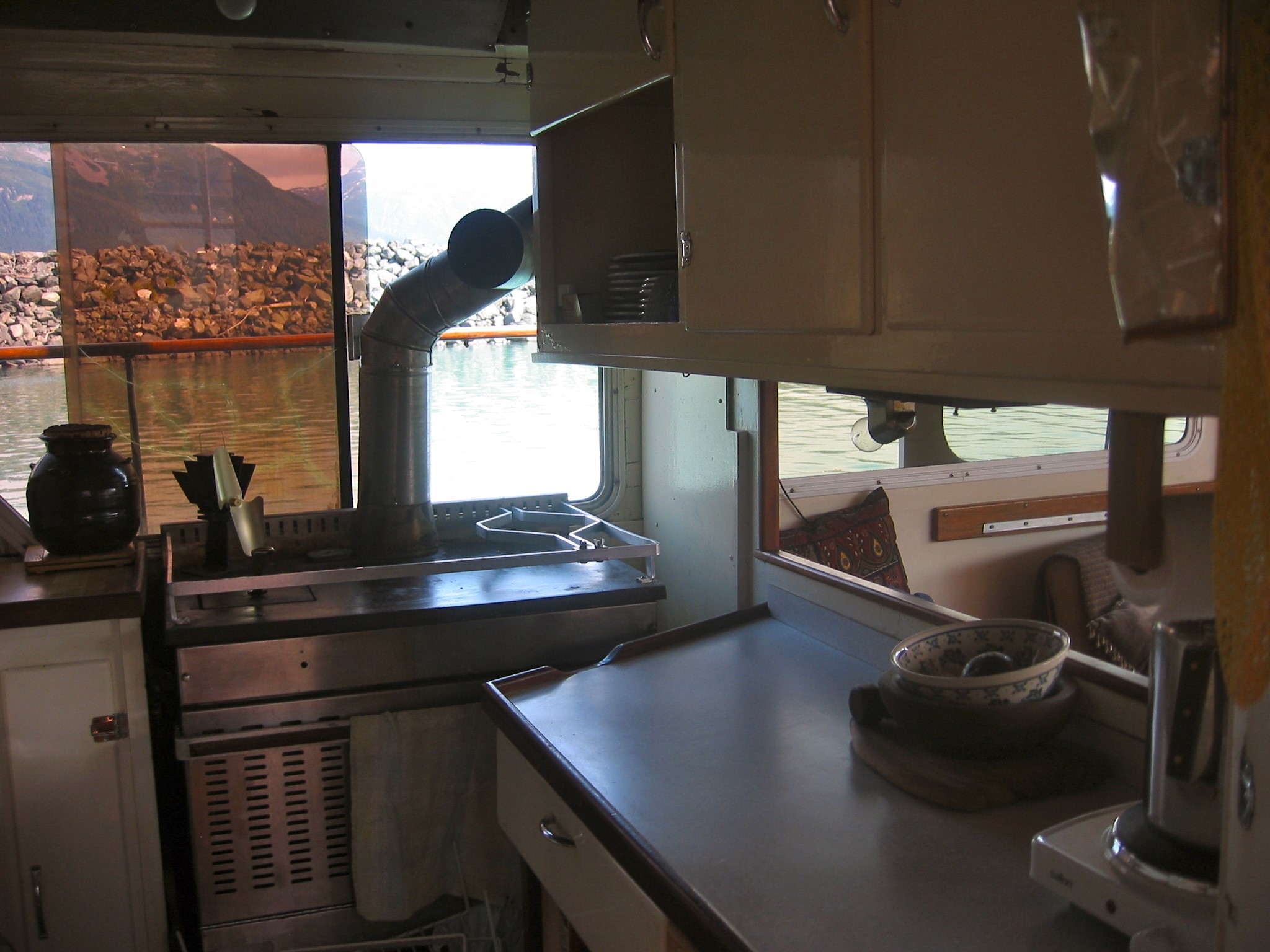 Mice in The Hice

We are docked in Prince Rupert, B.C. It feels great to be back in Canadian waters.  Audrey has been de-registered in record time thanks to Sheila (she is amazing) and we are once again Canadian registered with our home Port being Whitehorse, Yukon Territory.  We were never boarded by the U.S. homeland security, but the threat was always there like a heavy, very oppressive weight hovering over our bow. There is something about 18 year old boys with 50 calibre machine guns at their disposal that makes us really nervous. (The homeland security team in Alaska)

“Audrey Eleanor” had called Prince Rupert home for ten years prior to us taking her north to Haines, Alaska. Her former owners Blake and Amy along with old admirers showed up for a general inspection. The beer and yarns flow thick and fast. (We had to shovel her out the next day, the B.S. levels were high)  It was a great homecoming for the grand old lady after a two-year absence. We reluctantly leave our moorage at the Cow Bay docks in Prince Rupert and disappear with muffled engines into drizzle and fog.

As we motored away little did we know that we had acquired a stowaway who would drive us to the depths of despair.  He is darkly handsome, short and round with glossy black fur and an exceptionally long tail.  The little bugger is everywhere.  Our rule is that we have enough dry and canned goods aboard to last a month.  I have sprout seeds to provide live green stuff, we also experiment with sea asparagus and seaweeds and supplement some of these strange “greens” as the Captain refers to them with fish and crab.  Of course you sometimes come across a little corner store at the end of a falling down dock, which has vegetables lingering in bins that no one else wants, this is why they are still here of course.  These tiny supply stores can be miles in between nowhere.

His trail of red lentils gives him away.  It’s the strangest thing… to see trails of red lentils appearing and disappearing through out the boat. Then beautiful white toilet paper flowers began to show up in the dresser drawers and in closets. These kind of white flowers you sometimes see along the banks of the Yukon River (the toilet paper kind).  These ones are the nest type though.

One of the few things we do not have on board is mice or rattraps.  We are three hours out of Prince Rupert and not about to let a little mouse drive us back to port.  The Captain reverts back to his days of trapping and life is exciting.  There are water buckets set up with little ramps and string lines strung across the mouths of buckets to rotating bait…none of this is working.

Three days of mouse may not seem like a long time, but we are up close and very personal here…he scratches around at night, we can hear him under our berth, I start to think that I can hear him breathing. He has destroyed a month’s worth of beans, rice and a whole extra large bag of lime-flavoured nacho chips has simply vanished.  He leaves the empty bag as if to say in your face people.

When your time comes, your time comes.  The Captain gets up early and makes his way to the head (toilet) to find an extremely exhausted mouse swimming laps in the toilet bowl.  There is no sympathy; the intruder is immediately pinched by his long tail and lopped through the air, off the stern of the boat and he hits the water with a plop.  The crew and Captain feel a great sense of relief and a fish receives an early breakfast.  We are mouse free!!

The weather has been terrible so we are now sleeping up in the saloon on the floor.  We have better visibility up here.  I roll over on the mattress and look down through the focscle to the forward head. You can imagine my horror when I catch a glimpse of a very, very fat furry butt diving into a crevice in the wall.  This for sure is Mrs. Mouse and she looks like she will deliver a horde of lentil munchers at any moment.

If we don’t catch her before all of those babies are born, we will have to bring Audrey up on the hard and de-mouse her with some nasty chemical type stuff.  My theory about killer chemicals for rodents and bug sprays is, if it kills them it will kill us.  We may be bigger, but it will only take a little longer. To take a 30 tonne yacht up on the hard (land) is extremely expensive.  Regardless, there are no facilities in this remote area to handle us.  We would have had to live with the mouse infestation for two weeks or more, depending on the weather.

If Mr. Mouse was difficult to catch, Mrs. Mouse makes him look like an amateur.  She becomes bold enough to run over us as we try to sleep in the saloon.  I have to sleep with my head under the blankets, I am afraid that she will get caught in my hair.  The stress of her invasion is driving us crazy.  We are doing the sea going version of caddy shack.  I am beginning to appreciate that we don’t have a gun.  While I would not miss the mouse I would be concerned about a hole being blasted in the hull.  The Captain has had enough.

She calmly enjoys our peanut butter bait every evening and continues to build toilet paper nests in the hold, in the galley (closer to the peanut butter bait) the stash of toilet paper is almost depleted…things are getting serious.  She does not forget however, to leave her lovely little black offerings everywhere that she has been.  We are at our wits end.

Necessity IS the mother of invention.  Simultaneously we yell “the heads!”  The Captain smears a 2”x 2” piece of blue Styrofoam with the last of the peanut butter.  The bait gets set afloat in the head.   Well, my goodness gracious if Mrs. Mouse doesn’t fall into the same trap as her husband, we find her swimming exhausted in the head the next morning.  Without hesitation she is lopped off the stern of the boat as well and another fish is fed.  If anyone for one second feels any sympathy for this terrorizing critter, you should live with mice in your hice!

P.S. a young Inuit girl that I went to school with in Kugluktuk insisted that if mice was plural for mouse, then hice had to be plural for house, you couldn’t have one without the other.  People in the house were also a cause for it to be plural.  It has stuck in my head.  Her English was much better than my Inuktituk.