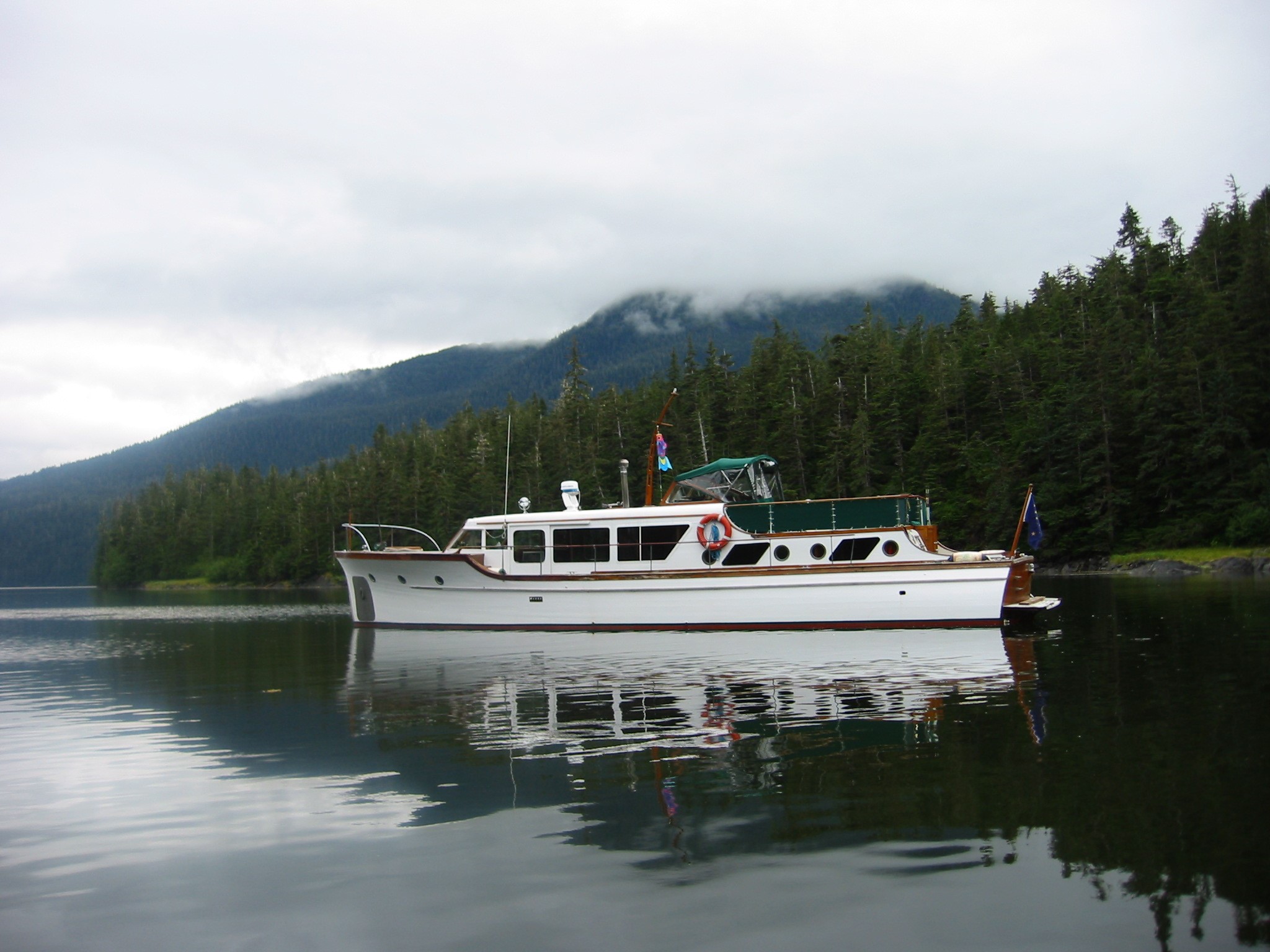 THE SCREAMS OF THE FURIES

The Captain is asleep with his good hearing ear in the pillow…I can feel the weight of it as it as it gets closer, roaring like an old WhitePass steam engine determined to run us down.  The Audrey Eleanor is pulsating with the sound…

It has been a handful of years since the magnificent, giant, old growth cedars of Stanley Park in Vancouver, Canada are flattened to the earth. Hurricane winds ripped and tore their roots from the very land that sustained them.  As they thunder to the earth causing humankind to tremble, we are at anchor on an old wooden boat.

Fifty four feet and thirty tonnes of old wooden yacht must be held off of jagged rocks by a chain and a cast iron Danforth anchor in hurricane force winds.  Our anchor had been set earlier in the afternoon and should be stuck in the mud.  We hope so.

The Audrey Eleanor, a 1948 custom wooden yacht is anchored in Potts Lagoon located at the northern end of Vancouver Island.  We had slipped away from our berth at the Government dock on Malcolm Island, disappearing into the fog like a shadowy ghost ship. After days of pouring rain and windstorms we are making our weather break from Sointula on Malcolm Island our quest is to find a safe and semi-permanent Harbour on a more southern portion of Vancouver Island.  It is early morning, we are soon enveloped in a grizzly gray drizzle.

Steel coloured Ocean leaves no definition, no distinction against steely skies.  Flat silver water appears oily, we motor off into nothingness, I wonder if we will drop off the end of the world? There is no indication that a storm is brewing as we search for the slicing dorsal fins of killer whales.  A family pod has been sighted recently here and we are on high alert.  This is an area of rubbing beaches for the giant “Wolves of the Sea”.

A change in tide swings us slightly to one side.  H-m-m-m is it tidal currents or are the waves coming up?  A Sea Span tug is starboard to us; he is making a run to catch the slack tide at Seymour narrows.  Spray from the sea is beginning to break over his bow.  “She’s coming up,” states the Captain.  “We are going to look for shelter before it gets dark.”

We have no radio contact.  In Ketchikan, Alaska we replaced the antennae, in Port Hardy, B.C. we replaced the radio, our reward for this costly process is a static squawk.  Whomp, whomp, whomp, the Canadian Coast Guard is hovering overhead in a very large helicopter.  It’s nice to know that they are there, but we don’t want to give them a reason to stick around. Audrey’s bow points us toward our destination, Potts Lagoon on Cracroft Island. The Search and Rescue Helicopter swings off to Starboard side and disappears from sight. The anchor is to be set in the mud.

Our new neighbourhood is made up of several float houses, this may be a summer camp, we are not sure. The lagoon is not very large with signs of an old wharf at one end and has a beach type that indicates it is good crabbing territory.  There is still enough light to drop a few crab pots.  Gray skies darken slowly into black.  I feel that someone is watching us from the float houses.  My hair stands up on the back of my neck, I don’t like this sense of being ogled while sitting out in the blackening middle of nowhere.  We circle the float house intending to be neighborly, no one responds to our hellos.

Hurricane-force winds begin as a distant rumble, sounding very much like the old Whitepass train roaring down the tracks into the City of Whitehorse, Yukon.  I can feel the weight of it in my sleep.  Closer and closer it comes, I sit upright with a start wanting to stop this bad dream.  It continues, the weight is a heavy pressure in my inner ear; it pulses like a migraine in my temples.  This is no dream; it’s a goddamned nightmare! An entity has arrived and is attempting to bulldoze us over! The Furies are coming, The Furies are coming!

Audrey Eleanor is pulsating with the sound. My Captain is asleep in the saloon with his good hearing ear in the pillow.  I sleep with the hard of hearing Captain, drop the anchor when need be and I do the dishes damn it! I am the crew.  Captain Rick must be dreaming that his perfect Perkins diesels are vibrating us toward the Mexican border; regardless it is time to share this experience with him.

I waken him to the all-engulfing screams of the furies.  A hundred shrieking banshees are blasting us in their rage.  A wall of wind hits the Audrey Eleanor with mighty force.  Icy Fingers of wind become steel, they rip and tear at the canvas. Swung hard to starboard, the chain attached to the anchor stretches taut and jerks us hard about. We stumble and fall with the motion.

Monsoon rains pummel the saloon roof. Blasting rain resonates on the roof.  I feel that I am inside a tin can that is being pelleted with small rocks, the noise is deafening.  The Captain yells for the spotlight as he flashes into action, setting radar and depth sounders on high alert.  Wrestling the saloon door open he shines the spot light into the harbor, the light stops dead, a solid black wall of water greets him, we see nothing.

No visibility coupled with the deafening rain means we have no way of knowing whether we are dragging our anchor over the floor of the ocean. There is no sight; there is no sound except for the pelting rain. The alarm on the radar is set to go off if we get within 50 feet of a solid obstacle, but that would be too late.  If we are blown up on the rocks in this blackest of nights it could cost us our lives.

Our radar is particular as to what it will reveal.  I jump up to check the depth sounder repeatedly. We are maintaining a water level of 45 feet beneath our hull and it is low tide.  As the tide rises so will we.  So far so good, but there will be no sleep this night.

I get a whiff of wood smoke.  My god!  Now what, we are on a wooden boat, are we on a wooden boat that is on fire?  Huge tanks of diesel contained in our hull would set up a blaze for all the world to see.  A frantic survey reveals that we are not about to be cremated. For sure someone is living on the float houses and doesn’t want to be seen.  The fury of the night compels them to light a fire or freeze. Our silent neighbour has started a wood fire in one of the float houses.  I knew I could feel eyes on us, this is creepy, I want to go home.

In true Yukon tradition we settle into a long night of cribbage.  Yelling at each other at the top of our lungs we attempt to out last the storm, 15/4, 15/6…and listening for things that go” bump” in the night under the Audrey Eleanor.

P.S.  Later we found the force of the jerk on the chain to the anchor caused the cast iron stanchion to bend.  You can see it still should you decide to visit. And so the journey resumes, join us soon for another; ADVENTURE OF THE AUDREY ELEANOR.