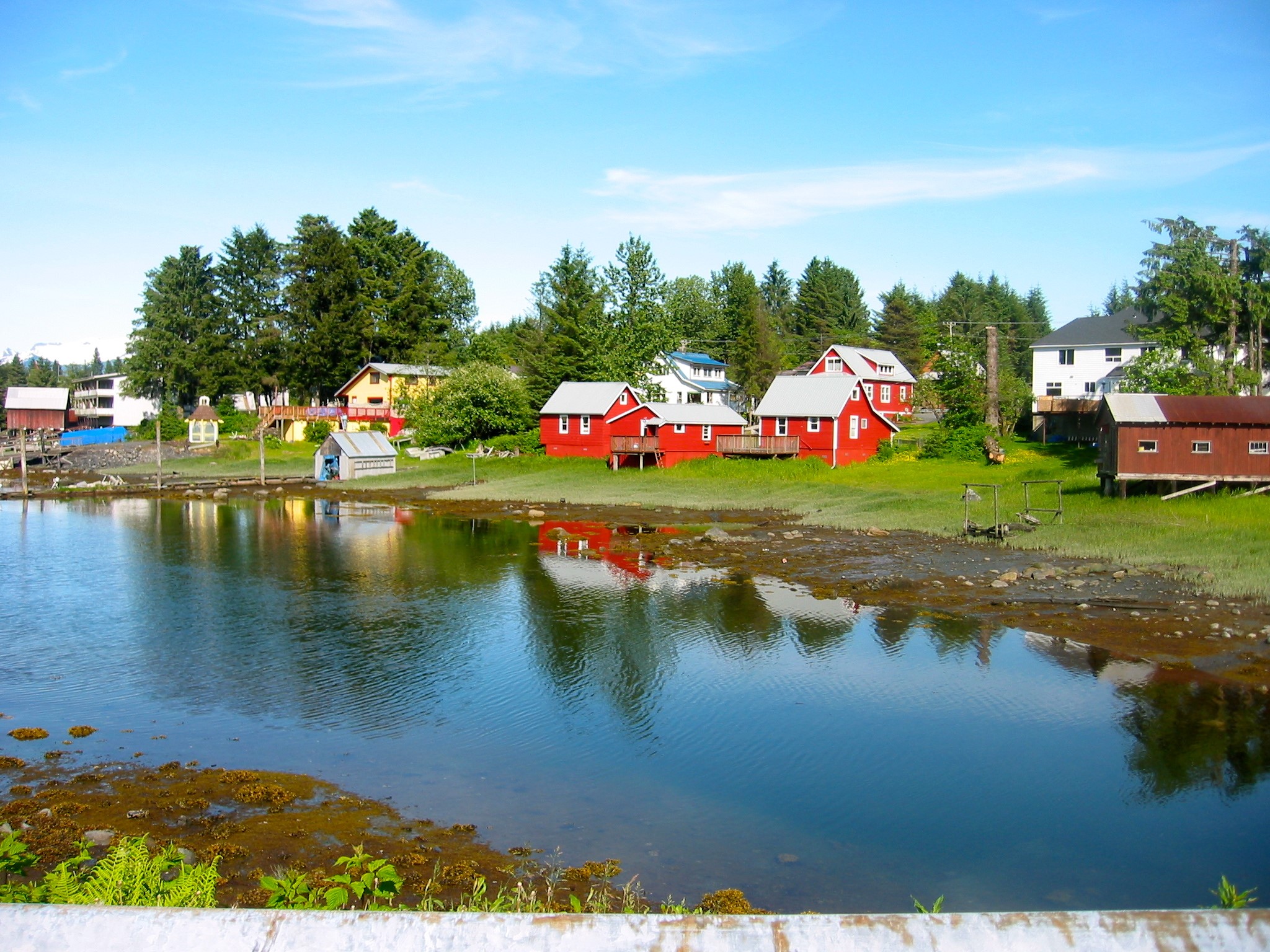 Hurricane force winds mean it’s just another day on the west coast. We had weathered two such storms in Potts Lagoon, located towards the north end of Vancouver Island. These are the winds that flattened Stanley Park in Vancouver B.C., Canada. Four days of sitting in the rain is wearing on us. The crab traps are providing fresh “meat”, but new sights and people that we had yet to meet are just around the corner…. time is dragging.

We were anchored beside a summer floating camp in Potts Lagoon; three houses set on floats, which looked to be a great place to hide out during the summer. It appears that someone has this idea as well, they are hiding out for the winter. The first night that we were slammed by the hurricane winds, we could smell wood smoke. We distinctly smelled wood smoke as the storm raged around us. This is not a good thing on a wooden boat and it becomes terrifying in the black of the night with the wild winds of the furies screaming at you.

We set out in the zodiac to see if we could raise anyone in the float houses. We circle the houses, call hello several times, there is no response. Who ever is inside does not want to socialize, we understand. Every night we smell the wood smoke, our anonymous neighbours don’t use any lights and we never see them. After four days of knowing that you have someone living beside you that doesn’t want to be seen, well, it just wears you out. I want to go, these anonymous neighbours are giving me the creeps.

Today’s the day! We are attempting to make it to Port Neville. Audrey heads up Knight Inlet and cruises around Minstrel Island, its bumpy but we moving. As we get closer to Johnston Straight the seas start to build again. The Coast Guard out of Comox are following us in a helicopter (they have done this before, it is getting personal). It’s rough going, but compared to some of the rides we’ve had, it’s bearable. Maybe it’s the hovering help above us that makes the rough seas easier to take. Nope, the waves build and we are forced to duck into Burial Cove.

The anchor is dropped and we wait for the tide to turn. Anchored beside us in the cove is a one hundred and twenty-foot ship that has been re-constructed and is now used as a floating bunkhouse, possibly for a logging crew. The crews must be on leave in Campbell River, it’s pretty quiet on board from what we can see and can’t hear.

It’s high slack tide and again, we are running for Port Neville before the tide begins to turn. We will duck into the Government wharf, which has a reputation of being a rough place to dock with swirling currents and tides. The Coast Guard is back above us as we near Seymour Narrows. There is a barge in front of us, we debate about getting up close and letting it break the waves for us. Time is against us, we will have to fight our own battle with the wind and waves, we are only a few kilometres from the dock and the barge is on the other side of the straight. We wonder who the Coast Guard is looking for. We have not talked to family and friends in days; we hope it isn’t us they search for.

The dock is to our portside. It has huge big beams and it looks very well made. The current is swirling around the piles; this is going to be an exciting landing. I am on the bow trying to either lasso the piles or jump for it, sometimes being five foot tall is limiting. The current is determined to take us back out into the channel, I can hear a voice…. no it’s not the Coast Guard or god either. There is a petite lady standing on the dock yelling at me to throw her the rope. Thank you goddess, the rope is thrown and she secures the bow. The Captain brings in her stern and we are home free.

Lorna introduces herself as the second-generation homesteader, mail lady, entrepreneur, and keeper of the government docks. She is appreciated.

She invites us to come ashore to see her families homestead and also throws in an invitation for dinner. The sun is starting to set as we head up the gangway. An old two-storey building sits at the head of the dock walkway, we stroll towards it. The sun is just setting as we reach land…. maybe we did drown out there, this has to be heaven, or at the very least, this is the Garden of Eden.

The Captain and I both stand with mouths wide open in awe. We are at the gateway to her property. There are green rolling hills with lush emerald grass that’s been recently cut (this is November). Off to the right at the top of a green knoll is the most perfect little log cabin; lights twinkle in the lace-lined windows. Several apple trees are scattered through out the acreage that still have red apples clinging to branches.

Underneath the apple trees are deer, small ones and big ones, no shy ones. As they notice us they come to visit. Lorna states, ‘they are looking for apples’. She hands us a few apples that she has hidden in her pockets. The deer walk right up to us and nuzzle our sides looking for their supper. Apparently they will follow a person around all day begging for apples. This year’s fawn looks up with big, soft brown eyes; you know that you have to find just one more apple, somewhere.

The two-storey building is the old homestead that Lorna grew up in. Rough, hand-hewn timbers are silver with age; it is now an art shop for tourists in the summer. Her new home, which is the post office as well, sits just beyond the homestead. We amble towards her house with our deer entourage bumping at our hands and hips. They have become a nuisance and a pain, funny how quickly that can happen!

Lorna lives here by herself. The log cabin is uninhabited; I wasn’t sure why the lights were on, maybe it makes her feel like she has neighbours. She has a generator for power and keeps her marine radio on to listen to passing ships. Bears are curious about the noise that the generator creates or maybe it was simply the shortest route to the apples, she has bumped noses with the bears often.

We tell Lorna that our radio has been giving us grief forever, she proceeds to give us a brief but though lesson in marine radios. Se’curite, Se’curite, Se’curite…doesn’t that mean GOOD MORNING?? We have spent most of our cruising time in Alaska. Alaska doesn’t have lighthouses or live broadcasts, they are all computerized.

In Canada we still have lighthouses with real people in them. They can see a black line thundering across the water and call it in. I love those people. Se’curite translated by me means pay attention, Se’curite twice is smarten up and three times is get off the big water and head for cover, NOW.

Lorna confirmed this. Pay special attention when you get up at 6 a.m. and they are already calling Se’curite, se’curite, se’curite, the wind hasn’t even gotten out of bed yet, just wait. You are experiencing the remnants of last nights “blow” and the best is yet to come. On this trip EVERY morning we woke up to S.S.S, Lorna said she’d never seen a winter like it. I feel less like a wimp.

This strong woman is one of the many independent people that we have met on our travels. She talks of selling off sections of her homestead. Her daughter has left to get married in Powell River. I could tell that she missed her daughter terribly, I can relate to her. It was a feeling that I knew well, my son and daughter are miles away and there had been times that I was sure I would never see them again. It would be a lonely existence; loneliness being the worm in this breathe taking Garden of Eden. This winter of storms is taking its toll on all of us.

The next day we opt to take a detour, why would we want to simply take on Seymour Narrows when we can manoeuvre through four rapids instead? I am starting to figure out my Captain…when he says that “God hates a Coward thing”, it really means Se’curite, Se’curite, Se’curite