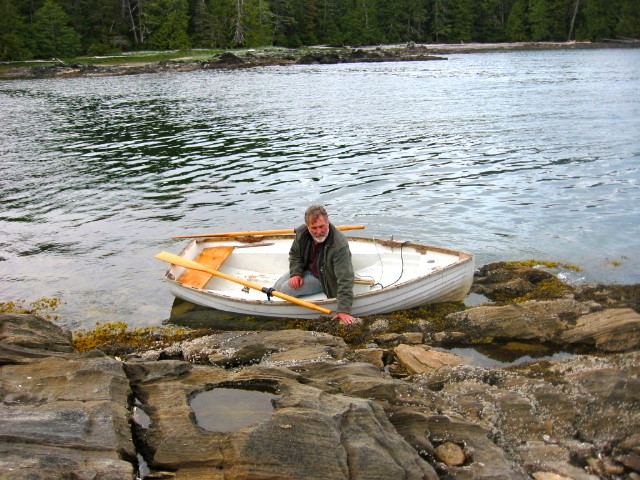 We are onboard The Audrey Eleanor; a custom-built fifty-four foot 1948 wooden yacht headed north to Alaska. After a near disaster with two multi-million dollar U.S. yachts at the Prince Rupert Yacht Club in Prince Rupert B.C. We are ready to take on Dixon Entrance. This is our first salt water crewing experience.

The shortest route out of Prince Rupert is north through Metalka Straight. We decide that we are not ready to take on the narrow, twisting Metalka with its range markers and rocks; and opt instead for the route that allows the B.C. and Alaska State Ferries safe access out of the Harbour.

We cruise serenely by the docked Alaska State ferry with sleepy passengers waving from the decks. Audrey’s unique design attracts attention wherever she goes, she is a show off. We slip past the ferry and run smack into a wall of fog.

You literally hit fog walls, banks whatever you prefer to call them.  We slid through the curtain and are in muffled world of soft greys and cool whites.  Nothing appears to be real as the fog climbs up on the bow and pulls its wall of white down behind it.  Everything disappears.  In a muffled cocoon, sounds are distorted; it is surreal and very dangerous.  Wooden ships or boats often don’t show up on radar, we are a ghost ship moving undetected through a shipping lane.

We do have radar on board our ship.  We had both assumed the other knew how to work it.  Neither of us knows how to make this ancient gadget work, the Captain is a better bet; he has used instruments when flying airplanes.   I head for the bow to stand watch or more accurately, to listen for approaching objects. What would a floating dead head sound like?

The Captain calls me back into the saloon.  He’s worried that if we hit something, or something hits us the impact would drop me into the salt chuck. Thanks to his bush pilot experience, he’s figured out the radar. Now we’ll be able to see our demise before it hits us.

A few feet further and the fog drops away as quickly as it came. We head face first into the sunshine.  This is the point in the channel where we take a starboard turn and are now in Hecate Straight. The seas begin to build.  Audrey’s displacement hull easily cuts through the chop that is bouncing other boats in the area around. I wonder how well I will handle it if it gets really bouncy…how well will Audrey handle it? We haven’t had her out of Prince Rupert Harbour and aren’t sure what she’s made of. Beautiful little Islands slip by and the people on the lighthouse wave enthusiastically as we cruise northward.

Dundas Island appears to our portside. (Am I starting to sound like I know something?) We navigate toward the Island and our anchorage at Brundigee Bay. One of the great things about traveling at this time of year is that there are virtually no other boats on the water and consequently no audiences,

You can drop and drag your anchor to your hearts content, or until hand cranking 100 feet of chain and one hundred and fifty feet of rode wears you out. My arms are still sore from doing battle with the U.S. yachts in Prince Rupert. This has to be done right if we are to get any sleep tonight…and I did mention, this is the first time we have anchored the Audrey Eleanor.

Huge orange Lions mane jellyfish attach themselves to our rode. Resembling Alien “blobs” from a bad sci-fi movie I believe that during the night they plan to slither up the rode, shanghai our ship and drop our bodies in the darkness of the bay. We sleep through the night; I do not believe that if we had drug the anchor or been eaten by Lions Mane Jellyfish I would have noticed.

We plan to get through Dixon entrance as early as possible. Winds tend to raise in the afternoon so the earlier the start, the better. I look overboard to see how far the orange aliens have made it up the rode; and oh my, is that diesel fuel rainbows that I see on the water?’ One of the fuel filters has blown a seal. An early start is no longer reality. Rick disappears into the  “Troll Hole” otherwise known as the engine compartment to deal with the busted seal.

The decision is to make breakfast and enjoy the scenery. We are really doing this!  Casting free from land, assuming total responsibility for ourselves and our boat, heading NORTH TO ALASKA! We had gotten to the point of both buying a boat and learning about a life on the high seas or to simply shut up and stay running the rivers of the Yukon. JUST DO IT – We just did it, finally!

At noon we are ready to cross the infamous Dixon Entrance. We are half an hour out of Brundigee Bay; there are bright blue skies with a light breeze tweaking the water’s surface but no Dixon demons here. What we didn’t realize is that we have started out at a full slack tide; as the tide turns, the winds tend to pick up.

The winds are now howling down all three of the enormous channels, we are headed out into Open Ocean in the direction of the Queen Charlotte Islands. The tides are running hard against us and the wind is blowing the tops off the waves.  A huge volume of water is dumping a massive deluge, pouring down on us from Alaska, British Columbia and I am sure, Japan.  We will sink, we will be drowned.

The wind is blowing hard against the waves, we have confused seas, the waves are having a nervous breakdown, pounding water is bouncing and slamming us everywhere.

The Captain has thrown his chair out of the way and he is working the helm with his whole body, feet braced wide apart for stability. I run through the boat duct taping the slamming doors shut, trying to stop the cupboards from spewing their contents all over the floors.  The noise of banging and crashing is deafening. It’s too rough to stand; I have to crawl back to the main saloon.

I see the Captain working the helm battling to take control of his ship.  The waves throw us sideways; he hangs on and with all of his might fights the wheel to take us in he opposite direction. There is nothing that I can do except to try to hold on.  I open the starboard door in the main saloon and have a death clench on the doorframe. The opening is about three feet by three feet and my thoughts at this moment are ‘if this ships going down I am not going to be trapped inside.’  I will not go down with this ship!

We are falling; Audrey hits the bottom in the trough of the wave full on her precarious beam. She shudders; the impact reverberates through her hull and feels like she is breaking apart at the seams. I have braced myself in the doorway to prepare for the impact; I am slammed against the doorframe, it takes everything I have to keep from being hurtled into the boiling black sea.

I cannot believe it! She is coming back around, I’m swung hard back against the chart table. The Captain is fighting for our lives. We begin to fall again, this time we don’t fall as far and we hit part way down on her side, the best of the worst and backward we roll.

The Captain has control. I can feel the change in Audrey. He’s in charge of our ship and he’s going to take us out. He looks at me and I yell at him “just drive this *@#! Boat; don’t you dare look at me!”

He can’t be distracted if he’s going to get us out. He said later that he was sure that I was having a heart attack. The waves are huge… my eyes are huger.  The waves are bigger than Audrey and Oh no…He’s heading further out to sea! I am going to have a heart attack! I am pleading, “please, please, don’t go out there!”

We have to head further out to sea in order to tack back.  We are in 18-foot seas and have no experience on turning a 54-foot ship around in this life-swallowing maw of an ocean.  “OH MY!’’  The Captain is now using Audrey as a giant surfboard and we are surfing the huge waves.  We are going to make it!

Our friend Don Pilsworth insisted that we take his survival suits, we have them, they are on board…in the back closet. In a very short time we went from a light breeze on sparkling blue waters, to fighting for our lives. We could not physically get to those suits, never mind put them on. It was simply too late.

Foggy Bay is considered the first good anchorage after Dixon entrance. One look at the waves breaking in the entrance to Foggy Bay and we keep going. We anchor at Kah Shakes Cove and when we finally shut down the engines… I start to cry.

P.S.  This is a popular storey with the gang at the Gold Rush Inn in Whitehorse.  Hello to all of you, save us a beer.