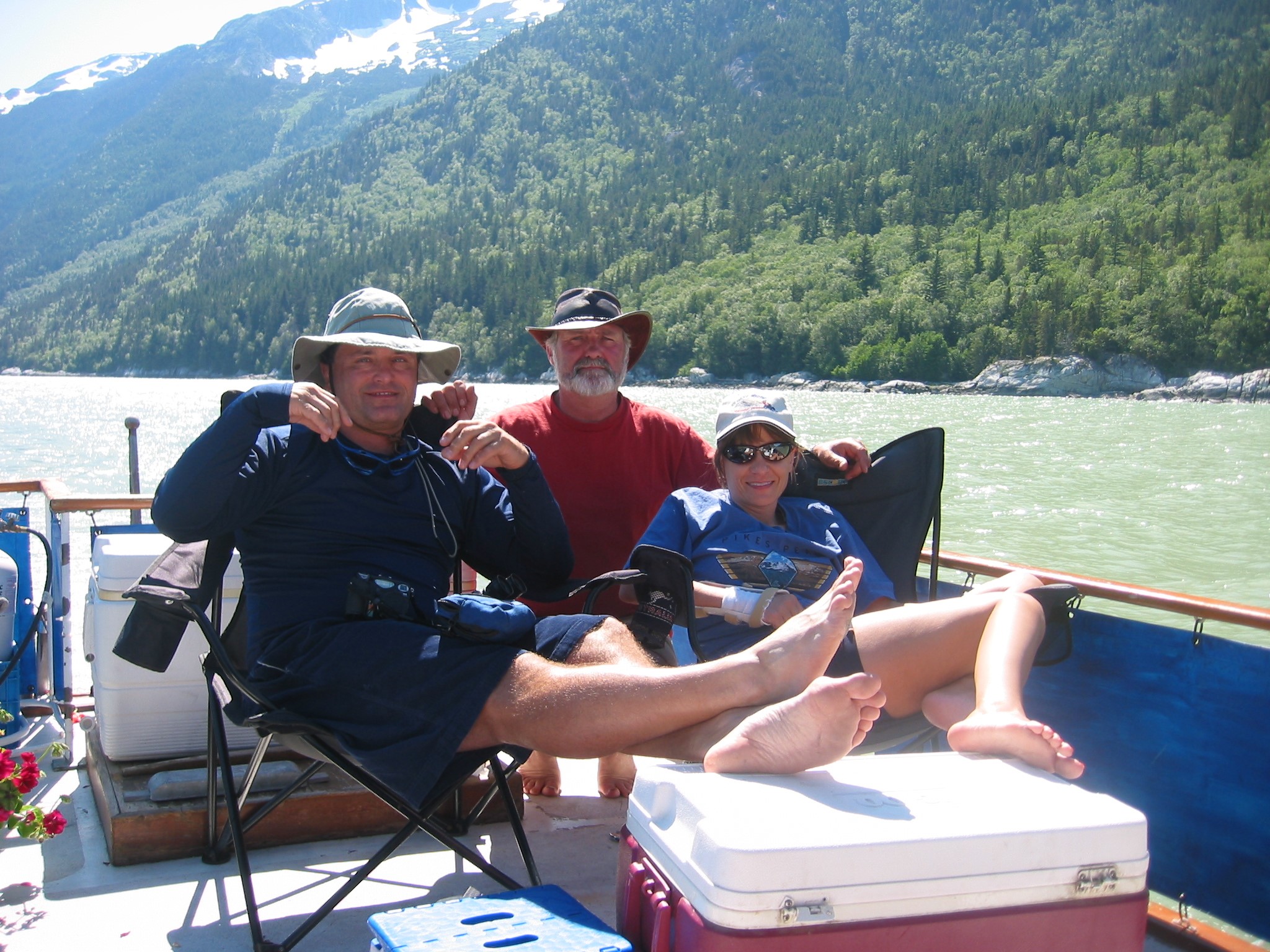 Our friends from Texas, Lubor and Tena lounge on the flying bridge of the Audrey Eleanor, the Captain Rick Cousins is in the background.  We are leaving Sullivan Island.

For a quick escape into the wilder, wilderness of Alaska aboard the ‘speed demon’ Audrey Eleanor it takes approximately 2 hours and is roughly 30 K.  We love to cruise behind Sullivan Island, south of Haines, Alaska and swing on the hook for few days of solitude.

The warmth of friends who came along for the ride enhances memories of these excursions; they were all shanghaied as willing crews.  David brought his guitar and sang ballads about the Yukon and Northern B.C. that he had written himself.  My favourite is still the one about being “up behind the mine in Faro,” where’s the C.D. David?

On this particular trip we have a large stash of fireworks aboard.  Shooting off fireworks in the Northern summer has always been a bit of a conundrum to me.  I think the fireworks that we shoot off on July 01 could be saved for the winter so that we can actually see them.  Fireworks are visual; it is supposed to visual is it not?  The venue changes if you are sitting in a harbour that is encased in huge snow capped mountains.  These create a perfect backdrop and reflector of sound, these mammoth stonewalls create the perfect platform for an echo, an echo, an echo, echo.

David and Don go ashore to light the entertainment.  Diane, Jean and myself sit on the flying bridge waiting to see what the results will be, it is June in the land of the Midnight Sun after all, a summer solstice month.  The Captain is on the bow with the binoculars watching the whole procedure.  “It’s lit”, he calls, and even with our naked eyes we can see the little puff of smoke on the beach.  A thin trail of smoke follows the tiny, tiny light that straggles into the sky and dies out with a disappointingly small bang.  A collective breath escapes the audience, oh well; we have all had this experience before.

But what is this?  An echo begins to build in the mountains.  It sounds like a gunshot in the distance as it rolls around the mountain rim and grows in volume.  The little bang has grown in strength and begins to echo back and forth between the rock walls.  This is very interesting, now the fireworks do have some entertainment value.  The guys are excited as they set off a combination of rockets.

Sounds start small and grow with a crescendo of deep booms.  Bursts of staccato gunfire shots engulf us.  We are yelling in excitement but can’t hear each other.  The vibrations are felt through the deck and climb the legs of our chairs.  This is the three dimensional effect that Disney has been trying to duplicate.  Round after round of fireworks rattles the chairs. We are sure that they must hear it in Haines and are preparing for the much-anticipated invasion of Terrorists we keep hearing about from our Southern neighbours.  The homeland security gang wasn’t here this weekend thank goodness.

The pyro crew climbs back into the zodiac on the beach we can barely see them for the gunpowder smoke.   A distant echo reaches further and further, and finally climbs back over the last mountain.  We are silent; shadows of the thunder from the rockets are still reverberating in our empty cranial chambers.  Sound, loud sound empties the mind. With a great sigh, the top level of silence is broken; David will have to sing his heart out to top that…he does.

Tides in Alaska are stronger and much larger than in Texas.  The Texans would never agree to that, but it is reality.  Friends of ours from Texas will have to attest to that.  Lubor and Tena wanted to go ashore to explore the Alaskan wilderness.  The zodiac and kicker are heavy; you can sort of drag them along the beach if there are no barnacles or such to tear and rip out the bottom of this rubber boat.  On a wet tidal beach the boat sucks down deep into the muck and it is impossible to get it to move without removing the kicker.  When we told them about the tide, I believe that they thought that nothing could be bigger then anything in Texas.  This simply wasn’t possible or the concept didn’t register.  They teach them that in Texas you know.

The Captain and myself stayed aboard to clean up and re-organize and to let the couple have a bit of a run away.  They often visit the Yukon and Alaska to re-charge and escape the crazy pressures of life in Houston, Texas. Sometimes in day-to-day conversation with our friends I wonder how they survived their lifestyle in that wasp’s nest.  They in turn could not understand our priorities.  I only know that if I wanted to relax and regroup I wouldn’t be going to Texas to do it.

This couple would show up in Whitehorse stretched to the limit and looking like they could not spend another day in their world.  When it was time for them to leave, the light was back in their eyes and they souls were re-charged.  I often wondered what would happen if they just stayed.  Simply stepped out of their other life in the big city. What type of people would they become with all of the material fluff removed from their lives?  I wanted them to know that most of us already knew about that “other” life and we had chosen to leave it behind.  We chose to be Northerners.

The tide rises 26 feet some days and it drops 26 feet some days.  Today was one of those days.  They caught it about half way out and pulled the zodiac on the beach so it wouldn’t leave.  This was very thoughtful for sure. With the tide going out though, getting the zodiac back to water was going to be HARD!  After a leisurely walk on the beach they returned to find themselves with the zodiac high and dry.  Tena is not a very strong lady and the weight for Lubor to pull alone was simply too much.  They tugged and pulled and made no headway.

We can see a momma grizzly and three babies off in the distance.  Now we are feeling a little excited.  We don’t want to scare these southern people just yet. Lubor removes the kicker and heads towards the ocean.  He doesn’t set it close enough to the water, I’m sure he is considering that the tide should now return…it would be in Texas.   He returns to the zodiac and without the weight of the kicker he and Tena can now drag the zodiac to the water.  The water is now further past where the kicker is set.  The zodiac is left at the water’s edge and the whole procedure is repeated, a few times over.  They start their return to Audrey exhausted.

In the meantime, momma grizzly and the three cubs have gotten to the spot where the initial parking of the zodiac took place.  Momma is agitated because from the opposite end of the beach a big Black boar bear is approaching her and her family on a collision course. Plus she can smell humans on her beach. We watched from on board, the Captain with his hand on his rifle.  Our two Texans are rowing toward the boat unaware of this whole other drama going on, we never did tell them.

Tena must have had an extra sense about the whole thing though.  She stayed on board the next day and was sitting on the flying bridge in 27c sunshine with her jacket on.  She kept trying to call out on her cell phone, finally in frustration she yelled, “the damned thing won’t work, what am I going to do?”  I told her that it was unlikely that the cell would work behind this Island and that was one of the great things about this area, NO CELL service, life slows down when you get rid of the cell phone.  She gave me a variety of reasons why she had to stay connected.  The reasons were all rationalized away. When the truth finally showed it’s naked face there really was not much I could say, she blurted,  “ Well when the bears swim out to attack us how can I call 911?”

The Captain had his first hummingbird experience behind Sullivan Island.  No, this is not code for something else.  Hummingbirds move so quickly that it’s hard to see them the first time, especially against the water.  I am trying to explain to my hard of hearing Captain what they sound like, not a chance.  In the state of Michoacán, Mexico there is an ancient archaeological site with a village called Zinzunzan.  These ancient peoples named the village after the sound that a hummingbird makes.

My Captain is lying on the front deck, shirtless in the sunshine; I am climbing up from inside the saloon and call to him.  He sits up just as a hummingbird decides to check out this strange flower.  There they are.  The hummingbird suspended in mid-flight with his needle like beak, maybe an inch away from the Captains beak.  They both try to focus on their opposing obstacles to no avail.  I can’t tell if the hummingbird is cross-eyed, but the Captain sure is. The hummingbird gives up trying to figure out this cross-eyed flower and whirls (zinzunzan) off into the sunshine.  Now the Captain knows what Hummingbirds sound like…and look like.

P.S. Lubor now you know, the” Rest of The Storey.”