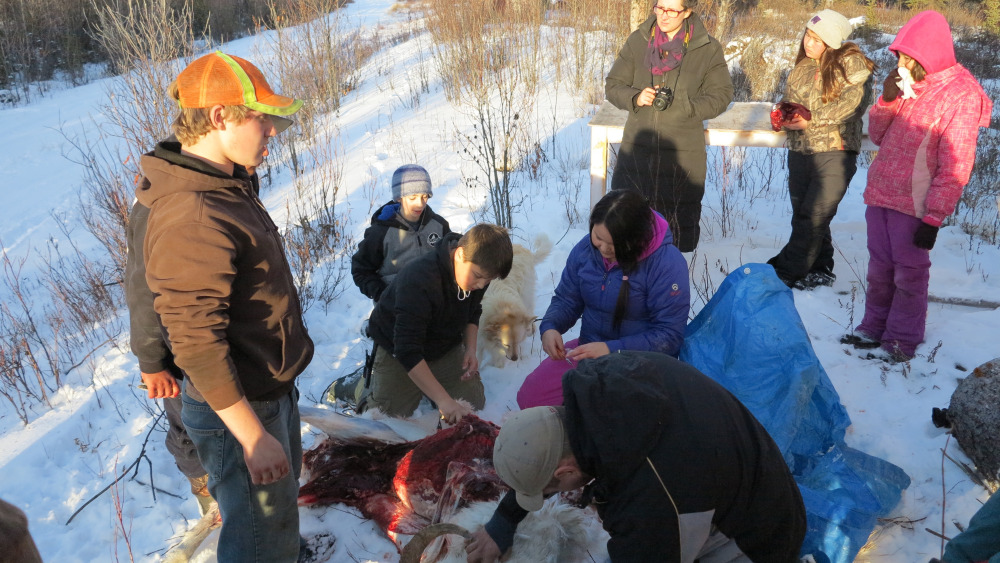 In mid-October, Arthur and I were invited to attend the Tr’ondëk Hwëch’in ‘First Caribou Hunt Camp’ at kilometre 131 on the Dempster Highway.   The Tr’ondëk Hwëch’in (TH) First Nation (from the Dawson area) were eager to share their very established hunt camp with other communities, like Pelly, that are working towards creating our own traditional camps.  We were humbled, or greeted with a slap in the face depending on how you look at it, when we arrived.  Km 131 on the Dempster is indeed many hours north of Pelly (5 hours) and upon our entrance at dusk, we realized our hiking boots and light fall jackets wouldn’t do the weekend of -15 degrees and 1.5 feet of snow justice!  Not only were we able to borrow snow pants and jackets, we were warmly welcomed by every Dawson City student, community volunteer, RCMP,  Ranger, Elder and TH leader on site.  Their hunt camp truly was put on by this whole community of people.  Over the 3 days, students’ had the opportunity to learn about gun and rifle safety, practice target shooting, trek out to hunt for Caribou and Dall Sheep, snare rabbits and benefit from Han language lessons with their TH instructors and Elders. Albeit all these culturally diverse experiences are unique –  the weekend really felt like camp! Boys cabin, girls cabin, dining hall, everything heated from wood stoves, everything powered with a generator.  One of my highlights was experiencing a winter hunt day-trip searching for Caribou in the mountains.  The amount of carbon-gas-guzzling trucks down the highway for one hour, and quads/argos/ ski-dos roaring through the pristine wilderness of the Hart River valley, was contrary to my idea of ‘connecting to the land,’ however, when in Rome 🙂.  We were out hunting for the Hart River Caribou, a non-migratory species.  It is worth mentioning a couple words about another important caribou species as well.

The Porcupine Caribou have been a cornerstone for people in the region for upwards of 20,000 years and are hunted today and were hunted by ancestors of today’s Gwich’in, Northern Tutchone, Han, Inuvialuit and Inupiat peoples.  They are known as one of the largest migratory caribou herds in North America. The herd of currently over 160,000 animals migrates through about 250,000 km2 of northern Alaska, Yukon and Northwest Territories, between their calving grounds in the Arctic National Wildlife Refuge on the coastal plains of Alaska, and their winter range in northern Yukon (the Peel Watershed.  —>  http://protectpeel.ca/porcupine_caribou_herd.html).   A point that always excites kiddos – this is one of the longest migration routes of any land mammal on the planet!  A point that really excited me, is that kids that study caribou, understand and appreciate lichen!!  Their vital water and food sources (lichen:) are in imminent danger if the exploration and development of the more than 8000 mining claims and proposed oil and gas developments for the Peel Watershed ensues. Check out that Protect the Peel website above… if not only for the caribou, for the pristine waters, cultural homeland, beautiful intact natural ecosystem, and unreal canoe trips (Wind River!) !