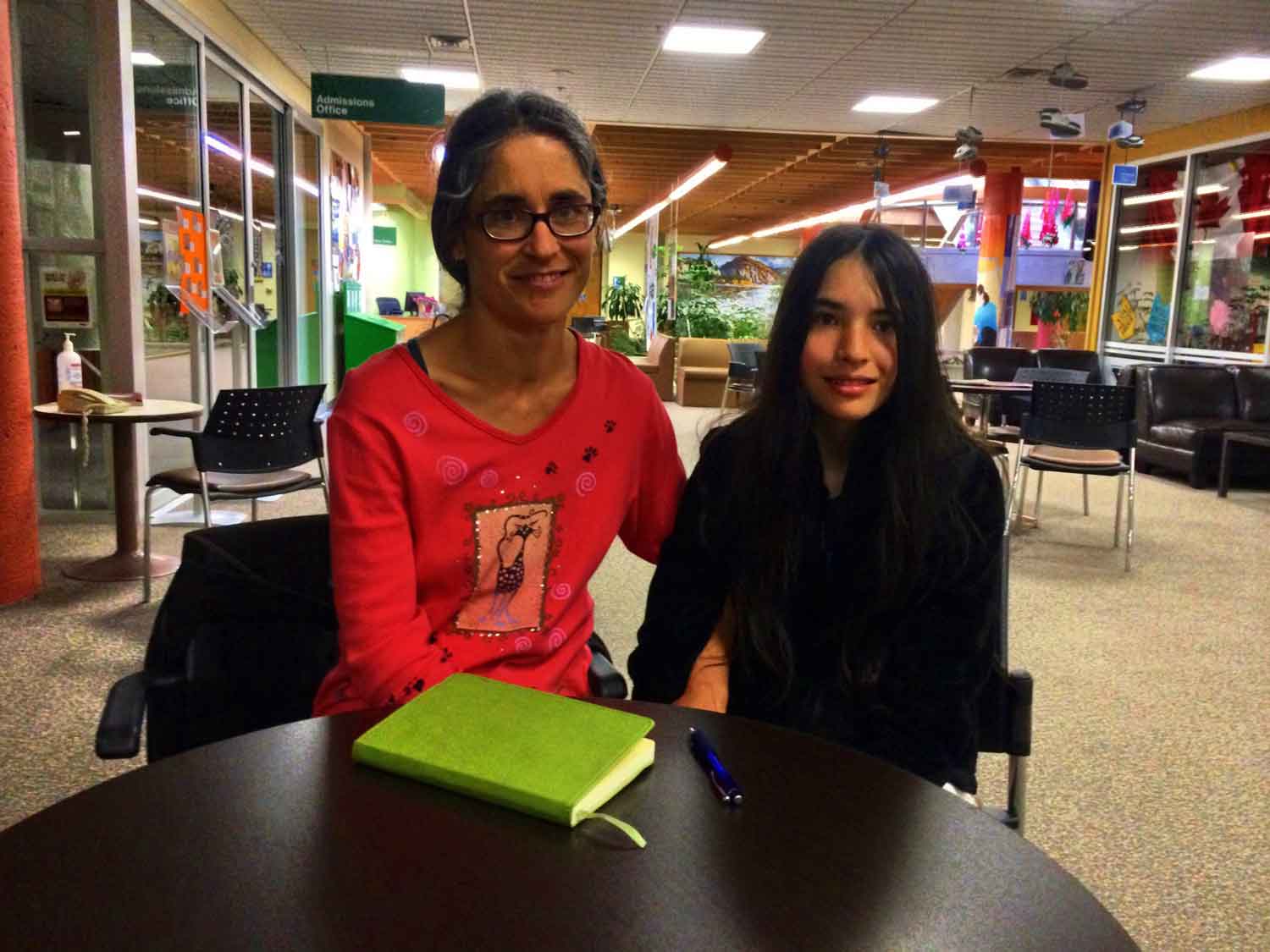 A literary dialogue with Ursula and her mother Rachel Westfall

Ursula is a twelve years old published author. She has a passion for writing and is already working on 4-5 books. Ursula’s mother Rachel Westfall is also an author and an avid fiction reader. Mother and daughter were going on walks through the forest in the evenings, they were trading thoughts back and forth, many characters were being evolved, and finally came up with an idea of writing a book together based on a Sasquatch tale. Mother-daughter team met me at the Yukon College campus to talk about their book and future writings. So here is a literary dialogue  – Gurdeep Pandher

Gurdeep Pandher: Congratulations to you and your mom for writing this book!
Ursula Westfall: Thanks!

Gurdeep Pandher: Tell me about your book, what’s your book about, and what’s the title of the book?
Rachel Westfall: It’s called Estella of Halftree Village: A Sasquatch Tale, and the main characters are a couple of young women who live in a village, and their village is an intentional community that broke away from the city to get away from all the crime and violence that was going on in the city life. So they live in a very old-fashioned way – very low-tech society – and they’re in the middle of the woods. And there are sasquatches living in the area, but they’re still sort of a legend, so not many people know they’re real. But a sasquatch starts to make friends with one of the girls and starts leaving presents and things for her. And they develop a friendship and then some bounty hunters come from the city and they’re looking for sasquatches. They want to catch a sasquatch to take back to the city to sell to some researchers. So there’s a lot of the story is built around the tension between the city life and the village life, and the struggle to keep the sasquatches a secret. And there are other secrets there as well that they have to keep from the city people. They don’t want the city people to know about certain things about the area because they want to preserve their lifestyle

Gurdeep Pandher: What inspired you both to write this book?
Ursula Westfall: We always go on walks through the forest in the evenings. And we trade ideas back and forth. Like ideas about stories and things. Me and mom were just having a nice walk in the forest. We started talking about this book and then we got enough ideas collected together that we decided to write a book. So it was an ongoing, continuous dialogue.

Gurdeep Pandher: Can you let me know how this idea was developed?
Rachel Westfall: Really, like Ursula said, we go for walks every evening together, and we talk and we share a lot of story ideas. And when we started writing the story, it was really a romance in the beginning, and then as the story developed, we started to build a lot more drama into it and a lot of humour. So a lot of our conversations in the woods were around character development, or around funny scenes, things that could happen that would be entertaining. And then we took turns doing the writing. So each of us would write a scene and switch back and forth. Like most of the sasquatch scenes, Ursula wrote, so she really created the sasquatch’s character. It just evolved like that. Once we had enough ideas, we started writing it right away. We wrote almost the whole first draft over the winter holidays.

Gurdeep Pandher: When did you start writing this book and how long did it take for both of you to complete this book?
Rachel Westfall: So it was over the winter holidays, and it took us about a month to do the first draft. And then after that it needed editing and proofing. And so there was probably about another month of that type of work before it was polished up. It took about two months, I think, altogether.

Gurdeep Pandher: How did two of you work together to write this book? Did you face difficulty working together to write a book? When we work together, especially in a closest family relationship; like son or daughter, sometimes people face some sort of challenges teaming up for a mutual project. Did you face any difficulties, challenges, or things like that?
Ursula Westfall: We didn’t really. We worked together really well.

Rachel Westfall: Yeah, it was beautiful. Yeah. There weren’t any problems working together on it. If anything, we kept each other going, because both of us have started novels before, but we never finished them. And so, to do it together, we were really able to work together, work through any of the blocks that we ran into, the challenges. And I think it was much more successful because we worked together.

Gurdeep Pandher: Who contributed more to this book, you or your daughter? Is this 50-50 percent contribution, or one contributed more and the other contributed less?
Rachel Westfall: I did most of the editing. But I think we shared the writing a lot more evenly. I just have experience as an editor, so for me to do the editing and make sure that the voices float smoothly, and that kind of thing. I did most of that. Ursula did a bit of editing. It was more around the story and what happened in the story. So each chapter has a few scenes in it, and we switched by scenes rather than by chapter. We set up the chapters after all the scenes were written.

Gurdeep Pandher: This is a question for you, Ursula, specifically. Was it easy for you to balance the work of writing this book and your school work?
Ursula Westfall: It was easy, because I usually don’t get much homework. So right after school, I’d just start writing.

Gurdeep Pandher: Is this your first book?
Rachel Westfall: Yeah. I’ve done academic writing and published that before, but this is my first fiction novel.

Gurdeep Pandher: What is the hardest thing about writing, according to your experience?
Rachel Westfall: I think envisioning the whole project, and getting beyond that first three chapters. I think that’s the hardest thing; to be able to envision where you’re going with it, and then just make it happen, give yourself time and room to do that. Because it’s so easy to start something, and it’s so hard to see it through to the finish. So I think it’s envisioning that product to the end, and then getting there.

Gurdeep Pandher: Is it mainly in electronic format?
Rachel Westfall: It’s paper and it’s also available through Kindle, as any book. Most of the sales so far have been the paper version though.

Gurdeep Pandher: How can readers discover more about you and your book in the town, and where can they go to buy your book?
Rachel Westfall: So in Whitehorse people can buy it at Mac’s Fireweed Books. If they’re outside Whitehorse, they can go through Amazon – any of the Amazon sites, so amazon.com or amazon.ca. We also have a website: sasquatchtales.com.

Gurdeep Pandher: Do you read much? And, if so, who are your favourite authors?
Ursula Westfall: We read almost every day. We read very often. And my favourite author is Brandon Sanderson.

Rachel Westfall: I love fantasy, the whole genre. I’ve read all the sort of famous epic fantasy books. Ursula is named after Ursula Le Guin, who is an epic fantasy writer. I really like Steven Erikson – he’s one of my favourite writers right now, he’s Canadian. Again, a fantasy author. Together we read a lot of Brandon Sanderson. We’ve read Ursula Le Guin, we’ve read Tolkien. Who else? Lloyd Alexander. All these fantasy genre writers, we’ve read out loud. As a family we read a lot of the books, so we take turns reading out loud.

Gurdeep Pandher: Are you both planning to write more books?
Ursula Westfall: We are. We’re already starting a sequel for Estella of Halftree Village.

Rachel Westfall: Right now we’re hoping to get that one done this summer. But Ursula has several other books that she’s working on as well. I’m only working on the one. She’s working on four or five!

Gurdeep Pandher: So you’re working on four or five books?
Ursula Westfal: Yeah, I might not get them finished, ’cause sometimes I just start the books ’cause I get some good ideas. But then I just can’t get through them all.

Gurdeep Pandher: So you are going to be a future writer of Canada, Ursula!
Ursula Westfall: Yeah.

Gurdeep Pandher: It’s great that you are getting great encouragement from your mom, Ursula. Are you both getting a good support from the Whitehorse community for your book?
Rachel Westfall: There’s lots of support for, I think, the arts in general, in Whitehorse. And, certainly, we’ve had lots of interest from friends and family, and the community at large, in the book.

Gurdeep Pandher: Thank you so much for joining this conversation, and I wish you both the best for your next books!
Rachel and Ursula Westfall: Thank you!