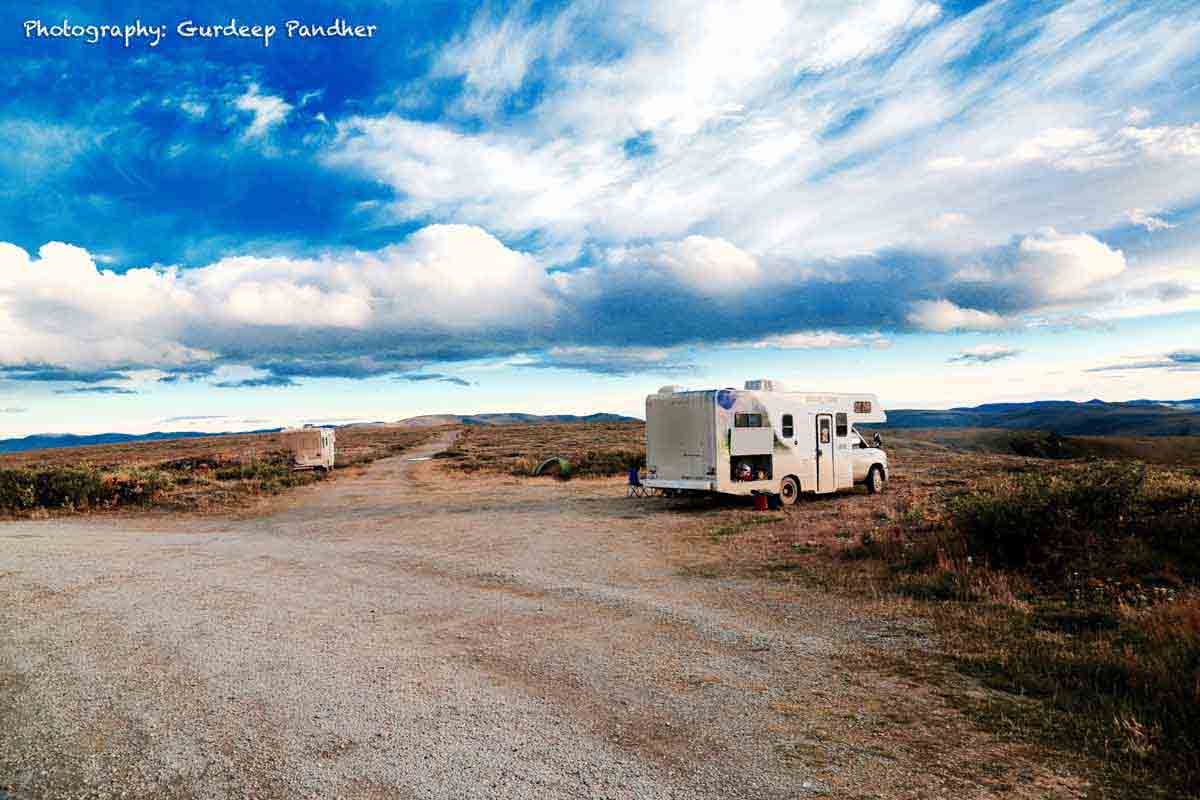 Place: Top of the World Highway at the Yukon-Alaska border crossing

The tall grass bowed to the force of the oncoming wind, admitting their inferiority with low rustling murmurs travelling towards the horizon, where the mountains sit patiently in their half-sleep, observing the world lazily with one eye open. High above, the sky was a watercolor painting, blues smearing together with billowing clouds reminiscent of stretched apart pillow stuffing, cotton wisps hanging so low they seem to be just out of reach rather than thousands of miles away. Their soft underbellies reflected the sky’s crisp color, reaching across the land to blanket the field below and moving in harmony with the wind that is perhaps the same merciless sheet beating down on the treeless landscape.

Somewhere between land and sky, an eagle soared, its sharp eyes observing a pale dot on the otherwise featureless plains, unnatural in origin and contrasting with the rich browns and yellows around it. Curious, it swooped down towards it, wings gliding silently in the crisp air as it turned in circles above the unknown object.

Underneath its watchful gaze, two creatures, ape-like but with a foreign air unfamiliar to the eagle, stepped out from an opening in what can now be distinguished as a rectangular shape, both bundled in artificial furs, their breaths puffing in the morning air. As one of them looked up, it spotted the eagle, an elegant shape swooping in among the low hanging clouds, and gestured with excitement, making incomprehensible noises to its partner, who joined in watching the predator, spinning effortlessly in its domain and appreciating the undivided attention of these beings before heading off to hunt for smaller prey.

Later that night, the eagle returned to swim among the crystalline points of shimmering lights painted in the inky black sky. A softer wind rustled through its dark feathers, carrying the scent of a rabbit some kilometers north, nibbling on a stalk of grass, oblivious to the ever present danger. However, the eagle, its belly still full from a thrush consumed earlier, was more focused on the sight immediately below it. The white rectangle was still there, except it was now emitting a dim glow from shapes carved into its sides.

On top of it laid one of the creatures from earlier, this time without its counterpart. The switch from being half of a bigger, all-encompassing force to a figure of solitude fascinated the eagle, which derived power from being a deadly hunter in isolation, a lone shape slicing through the air. The humanoid below displayed no sharp claws or penetrating beaks or eyes that could see for miles and locate prey with cold, calculating precision. In fact, it was surprisingly soft and harmless, yet it allowed itself to be separated from its pack.

Neither too big to be threatened nor too small to be noticed, the being demonstrated an unknown arrogance at braving the wide, never ending sky on its own. The same trait will inevitably bring about its destruction, the consequences of a carefully tamed sense of superiority looming in the near future. At the same time however, as the eagle regarded the still figure staring into the infinite cesspools of space, it also detected courage, intelligence, and humility, linking the lone creature to the eagle, the rabbit, and to everything stretching as far as any eye can see.