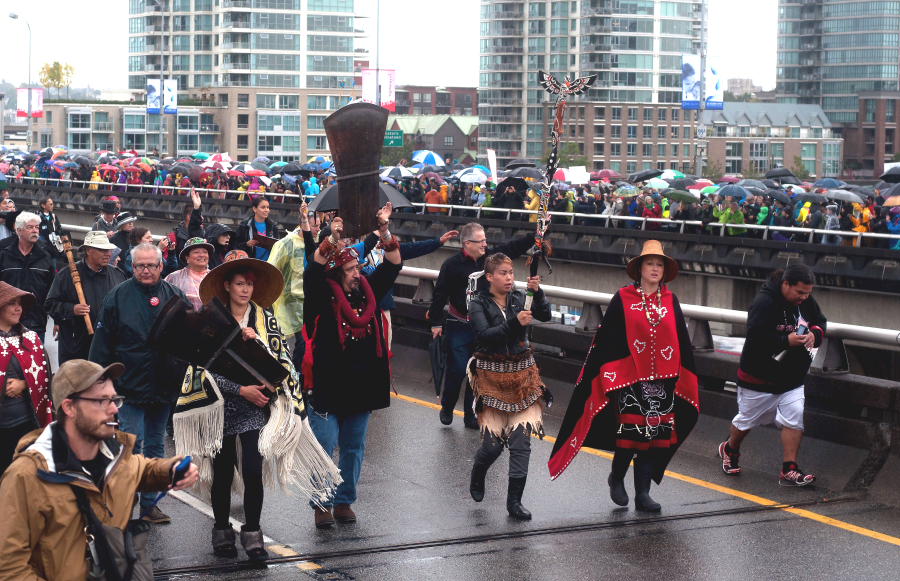 ON Sunday, September 22, thousands of people from many cultures braved the torrential downpours common to Vancouver, in order to partake in the Walk for Reconciliation. This walk marked the end of a week of events aimed at reconciliation between indigenous people and all Canadians.

The Reconciliation Week, the sixth of seven national events of the Truth and Reconciliation Commission, took place at the PNE. On the first day, the Pacific Coliseum venue was packed with crowds of people. People from all over the country and beyond travelled to Vancouver for the week, including many Yukoners from the fourteen First Nations in the territory. I even met a Hopi man from Arizona. Arnold Joe from Pelly Crossing said, “There were students from all over the place, all different schools. Universities cancelled classes so students could come”.

For four days, the Truth and Reconciliation Commission listened to testimonies of survivors of the residential schools funded by the Canadian government and run by churches. There were many displays with information on the national crime against aboriginal people, including the sexual, physical and emotional abuse. There were records of tuberculosis cases in schools, some of which had only a 50 percent survival rate. There were stories of the medication that was being tested on aboriginal children, using them as an experimental group without consent from them or their parents, and stories of children attempting to escape and parents attempting to retrieve their children, only to pay an even greater price. There were stories of children being shampooed with DDT. Unfortunately, the list continues.

However, there were also many tents with various ceremonies that all were welcome to partake in, and tents with amazing aboriginal artwork. Sweet sage smudging could be smelled in the air, singing and drumming could be heard, and the sacred fire was tended to for the entire week. The event t-shirt was sold, which had a Kwakwaka’wakw (from northern Vancouver Island) word meaning “we are all one” printed on it: Namwayut.

The week culminated with the four kilometer walk through downtown on Sunday. Karen Joseph, the executive director of Reconciliation Canada, was worried that the weather would influence the turnout for the event. It was her father, Chief Robert Joseph of the Gwawaenuk Nation, who originally envisioned a walk for reconciliation, dreaming to have ten thousand people participate. The numbers in Vancouver were estimated to be close to 70 thousand. It was a spectacular sight to watch what looked like thousands of brightly coloured mushroom-tops march across the viaduct with BC Place in the background, as people holding umbrellas followed the First Nation dancing and drumming groups leading the walk.

To commence the symbolic walk forward towards a society of acceptance, several speeches were given. Bernice King, daughter of Martin Luther King Jr., engaged the crowds in a passionate speech, marking the 50th anniversary of her father’s revolutionary “I have a dream” speech. She emphasized not to forget economic empowerment as part of the way forward, and stated that resolution to the cultural oppression that was experienced by indigenous people will require all sectors to take part.

Justice Murray Sinclair, the chair of the TRC, thanked all of the survivors for sharing their stories over the previous four days in front of a large audience.

“I want you to know that we understand how brave it was for you to stand up before us, and before all the people who were there at the event this week, and talk about those stories, and talk about those pains, and share your tears,” he said. He also thanked them for sharing their stories of resilience and of how they came through it. He referred to reconciliation as a challenge to the whole country:

“… the most important part of it is that Canada must understand that this is not an aboriginal problem,” he said. “This is a Canadian problem.”

Although many agree that the road will not be any easier now, after simply walking the streets of Vancouver in unity one afternoon, hopefully we as Canadians are one step closer to understanding the issues faced by aboriginal people today and why those issues are present. We are hopefully one step closer to resolving their pain and celebrating their resilience and their rich cultures. As Justice Murray Sinclair said, this is a Canadian problem, and one which will require a multi-faceted solution to overcome the fallout of such massive cultural oppression. Namwayut – we are all one.