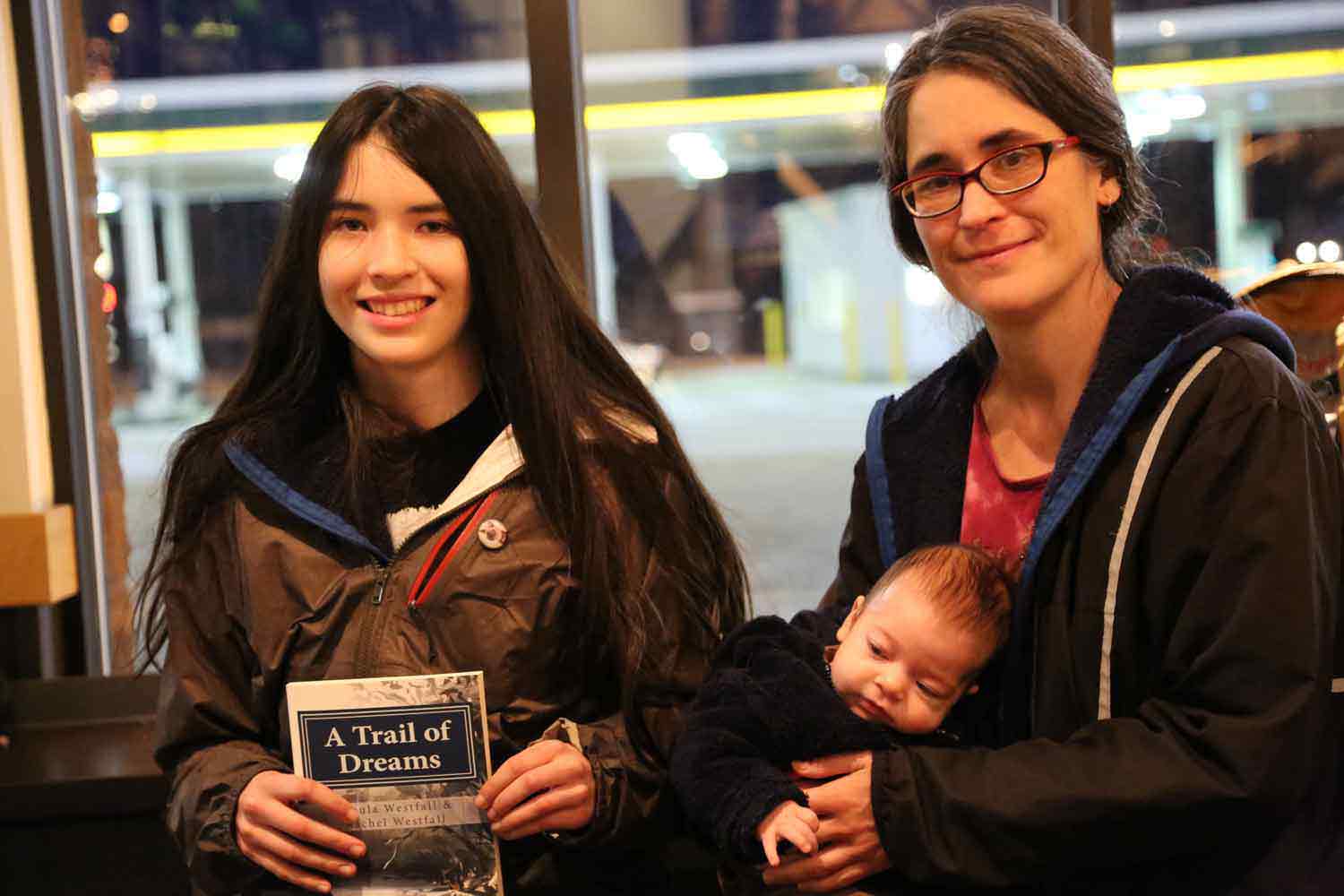 Ursula Westfall is a Yukon 8th grade student with a very bright future ahead. She’s co-written two books with her mother Rachel Westfall and has plans for many more.

The Westfall ladies are a Whitehorse-based daughter-and-mother team. They’ve successfully collaborated on their second published work, which is the book, A Trail of Dreams. This work was published in autumn of 2015. Before they wrote A Trail of Dreams, this team published their first book, which is titled, Estella of Halftree Village.

Rachel Westfall has a Ph.D. in Ethnobotany from the University of Victoria in B.C. and her daughter, Ursula Westfall, is a student in the city of Whitehorse. Rachel now works with the Yukon government as a senior statistician.

I met young Ursula and her mother, Rachel, in Whitehorse’s Starbucks coffee shop during the month of December 2015 for a conversation about their newest book.

Rachel introduced the book by giving a quick and fascinating summary, which actually included information about both published novels:

“The main characters in both of these stories are the residents of a village which is an intentional community living in the wilderness. They’re people who have rejected modern society, which in the story is quite dysfunctional. It’s a bit of a dystopia. And, in A Trail of Dreams, one of the residents of the village starts having dreams that something terrible is going to happen to the village and she thinks that it’s coming from the direction of the city, but she can’t figure out what it is.

So, she goes on a journey to try to figure out what the threat is and whether she can do anything about it. So she gets to the city and meets a bunch of very strange characters, finds out what the threat is, but she can’t actually do anything about it. So she has to go back to the village and in the village there’s been some drama going on involving a Sasquatch who has befriended some of the villagers. But other villagers don’t know the Sasquatch exists. So there’s some funny scenes there. And then a solution comes their way.

So both stories have that tension between nature and city life, there’s that tension that really sets the stage for the stories.”

Rachel and Ursula’s second book is a stand-alone story as well, so if you haven’t read the first book, the second book will still makes sense. However, the same characters appear in both novels and they also share the same setting. So, this new story is interconnected with the last tale, but it’s still an independent story.

Rachel told that they did most of the writing over a period of about a year, off and on, after they published the first book in 2014. They got the second book published in the fall of 2015 through the publisher, Createspace. This book is also available at Amazon and in hardcover as well.

“Finishing one story, we were inspired with ideas for the next story,” Rachel mentioned that she and her daughter were inspired by the first book. “And it’s the same with the third story that we’re working on now. As soon as we finished the second story, we got inspired to write another one. And you get a lot of energy from finishing a project. And it gave us— I guess we felt encouraged that we could write more.”

“I usually write every evening in my free time, like I set aside some time for writing,” remarked the accomplished Ursula, after she was asked to explain how she balances school work and writing. She said she wrote non-stop, even on Saturday and Sundays, and, to date, she has written a lot of fantasy tales. The subjects of Ursula’s fantasy writings are things like dragons, with a lot of complex lore. She creates the lore and creatures and realms and loves creating fantasy stories which may be classified as “dragon fantasy”.

Ursula said that they were planning to make three books in the series and they would complete the whole story in the third book. They are expecting to complete their third book in the fall of 2016.

On the question of next projects after the third book is written, Rachel said that her daughter Ursula has got a number of novels that she’s working on right now and some short stories as well:

“If we decide to do another collaborative project, that would be great, too, but right now we’re just trying to get the third book…that’s what we’re focusing on right now, is the third book in the Halftree Village series. And then we’ll see after that.”

Rachel is originally from Victoria BC and grew up in Quesnel, in central B.C. She has lived in Vancouver and Victoria and she moved to Whitehorse ten years ago. So, Ursula’s really grown up in Whitehorse.

Rachel said she also had a passion for writing since childhood. However, most of the writing she did as an adult has been technical writing, which is a more academic type of writing. In addition, she wrote quite a lot of poetry as well. However, writing fiction is fairly new for her:

“It’s something I’ve always wanted to do. And Ursula’s really opened that door for me because of her passion for fiction.”

On the question of challenges of collaborating with immediate family, Rachel said that they teamed up really well, “I think if we didn’t we would not have been able to finish these books. There’s no way we could have if we were arguing about what was going to happen or how we were going to write it. It wouldn’t have worked.”

Equally excited, Ursula concluded, “We urge each other on.”

Rachel further elaborated how her family is working as a team to make writing a family affair. She told me that her son is also involved, as a proofreader.

“Where he’s involved is we bounce off a lot of ideas off of him. He helped proofread the new book. We all read it out loud together as our bedtime story over a period of a few evenings and he helped to go through that process and we cleaned up a lot of things that didn’t make sense at that time.”

On the question of hobbies other than writing, Ursula said, “When I am not writing I am usually playing music or reading. I also play the piano and the flute.”

“When I am not writing, I am busy raising my new baby,” Rachel added. “I like gardening, silversmithing, music. I also play the piano and things like that. I have more interests than I have time for. Right now I’m focusing on the writing.”